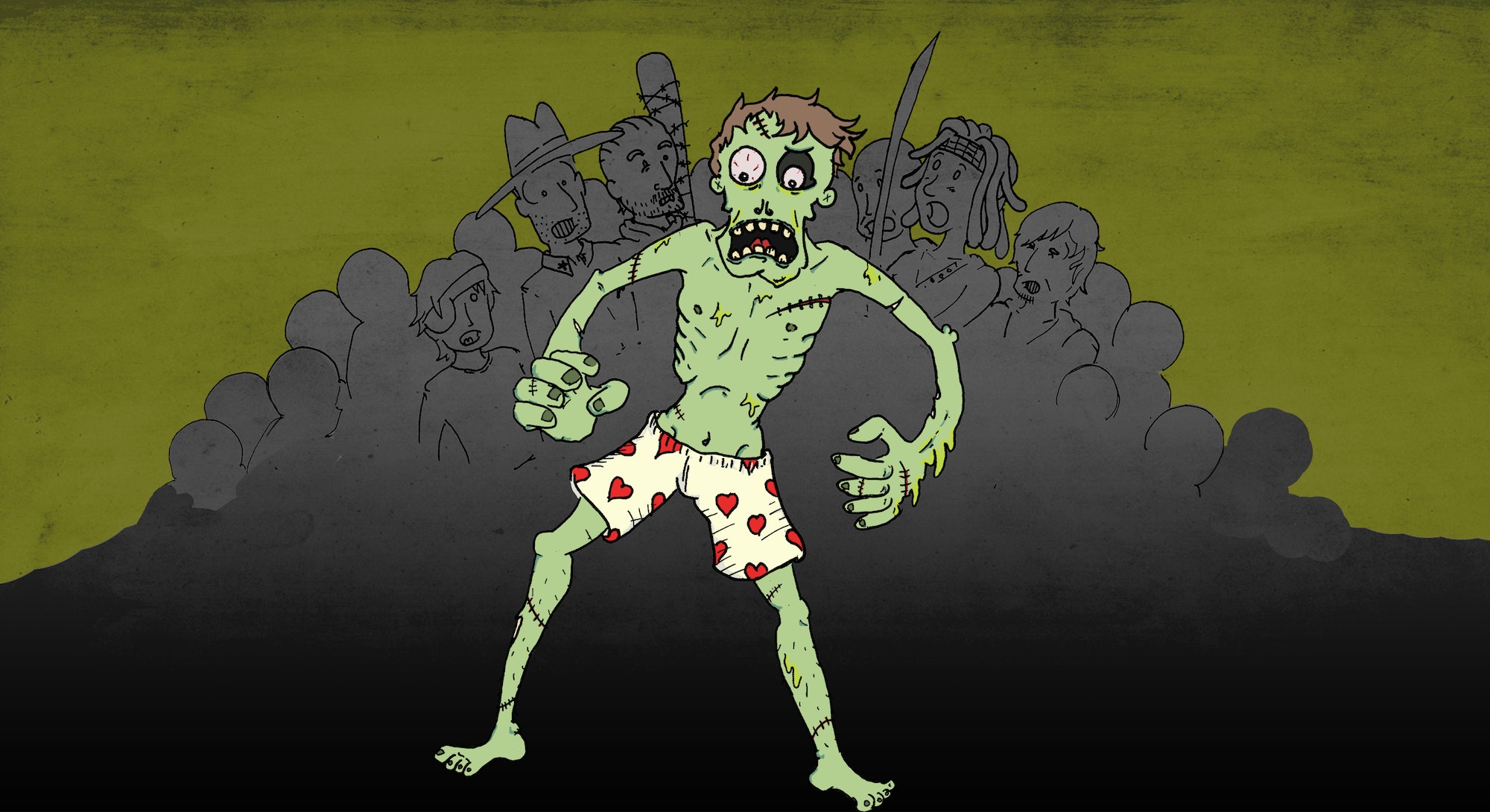 The zombies who feast on the cast of The Walking Dead are beginning to fall apart. When the outbreak started, the freshly turned walkers looked pretty normal, if more than a little bit lifeless. As the series continued, though, the living dead have started to decay. Many are missing limbs, and chunks of their raggedy flesh are barely clinging to their emaciated, rotting frames. But since The Walking Dead airs on basic cable, we haven’t gotten a look at what the zombies’ downstairs situation is like.

And so we set out to answer this question: Are the walking dead walking with or without dicks?

We must remember that, above all else, a penis is not immortal. A normal, decaying, male human body would effectively lose its genitals well before Rick Grimes ever had time to grow out that sweet beard. The same process that would castrate the living dead, however, also makes the existence of zombies impossible — so already, we’re in unknown territory. Clearly, though, fictional zombies aren’t normal decaying bodies. In that case, their dicks would have an afterlife of their own.

How Do Real Bodies Decompose?

When a person dies, the biggest thing that causes decomposition is the body’s own bacteria via a process called putrefaction. There are trillions of bacteria cells that live in our guts. Bacteria and people have a symbiotic relationship. We keep them well-fed, safe, and warm inside us, and they help to break down food into compounds our bodies can use. While we’re alive, at least.

“When you die, it’s not so warm and comfortable anymore, and there’s no more food coming down, so those bacteria get a little restless, and they start to break down their host.” Kimberlee Moran, the director of forensics at Rutgers University, tells Inverse. These bacteria go hog wild, traveling down arteries like highways and chowing down. As they feast, they release gas as a waste product. This gas builds up inside the body, causing it to stink and bloat. Eventually, all this gas has to get out from inside the body somehow, and it’ll either purge through an orifice or, if those are blocked, cause a rupture.

“This is the very moist stage of decomposition,” Moran says. The epidermis of the skin starts to detach and just slides off in what’s grossly but accurately known as “skin slippage.” Since a penis is soft tissue, it would be subject to this slippage as well.

There are countless variables, but Moran says it would only take “a couple weeks” for a penis to just kind of slop off in an average climate. In a warmer, wetter location like Atlanta, any penises would probably be gone within a week.

However, assuming that a zombie could be out and about, hunting for brains for nourishment before the body’s own bacteria destroyed itself (which happens pretty quickly), some pretty messed-up stuff would happen to any living dead’s dick first.

“As the bacteria start to break that body down, the body starts to blow up, kind of like a Stay Puft Marshmallow Man, and that gas goes into the penis as well,” Moran explains. “The penis actually kind of blows up like a balloon.”

“It doesn’t resemble an erection, but it kind of does,” she continues, “so you would basically have zombies running around looking like they had erections, which probably would be scarier than the zombies themselves.”

It gets worse. Depending on how a body is positioned when it dies, blood and bacteria pools could cause the testicles to swell up, and pressure from gas within the body would force any remaining semen out of the tip of the penis. Plus, in the real world, bacteria aren’t the only things eating away at a corpse. “Within 24 hours of somebody passing away, flies are going to pick up the sent and start coming to lay eggs,” Moran says. “Those bodies and those penises are going to be covered in maggots as well.”

But Zombies Don’t Work This Way

While there are many different ways to categorize the stages of decay, they’re all breaking down the same process, and no matter how you slice it, things get icky quickly.

“The bacteria in your mouth travels up to your brain and eats out your brain so much that it comes out of your nose like yogurt,” Matt Mogk, the founder of the living dead-centric website the Zombie Research Society and Talking Dead cast member tells Inverse. “So, if zombies were powered by the brain, if they’re going through a normal process of decomposition, they’re not going to last very long.”

The normal decomposition would make a zombie penis a truly disgusting, horrifying sight, yes, but it would also ensure that those zombies wouldn’t “survive” for long. Yet, in shows like The Walking Dead, zombies are a lingering menace. Clearly, they aren’t experiencing putrefaction. Mogk posits that the zombie virus could be so toxic, in these cases, that it doesn’t allow bacteria to thrive.

There are some real-world equivalents. High levels of radiation can drastically slow the body’s decay. As an aside, Mogk notes that in Night of the Living Dead, the film that’s widely accepted as having invented the modern idea of a zombie, strange radiation was to blame for all the brain-eating. “The zombie infection was caused by an irradiated satellite that crashes back to earth with alien radiation on it,” Mogk recalls.

If, either through extreme toxicity or some sort of supernatural intelligence, the zombie virus is able to prevent bacteria from eating the body (and keep away animal life), then what would happen to the penis? In this scenario, which is the one that The Walking Dead, and most popular depictions of zombies, seem to adhere to, the only noticeable factor causing the body to decay is the outdoor elements. Barring extreme circumstances, and in the absence of bacteria, the elements take a much slower toll.

“I would argue that your dick would last as long, or probably longer, than a lot of other things,” Mogk says. “I don’t know why their dick would fall off. It’s so malleable.”

While water — especially prolonged submersion — would cause the flesh of the penis to “start fluffing off,” Mogk says, a deceased person’s genitals are likely to be more protected than the rest of their body.

“Theoretically, they have underwear and a pair of pants over the top of their dick,” Mogk says. Moran notes that people die in all states of undress but agrees, “If they’re wearing clothes, it’s very well protected.”

Moran is hesitant to make too many proclamations about what exactly would happen to a zombie’s penis in this situation, given that we’ve left established science far behind, but she supposes that in lieu of all these normal factors, the body will start to naturally mummify, which normally happens in very hot and very dry places. “A zombie penis would just kind of shrivel up and go…” Moran pauses, looking for the right word, “pruney.”

The normal decomposition process would, for sure, destroy a zombie’s penis in pretty short order, but it would also destroy the zombie. Take that normalcy away, and there’s no reason that an average zombie would lose its penis any quicker than it would shed any other body part. One thing is for sure though — a zombie has no use for a penis. “Sperm actually dies after 24 hours, so there would never be zombies making other zombies,” Dave Marks, an editor at the Zombie Research society, tells Inverse. “Unless they, I guess, have sex within the first 24 hours.”

Zombies typically don’t urinate, and they don’t have any sexual drive. Their penises wouldn’t work, and the organ wouldn’t be missed when it finally went, whatever the reason it waved goodbye.

“The zombie wouldn’t care if an animal were eating its dick off,” Moran says.

Robert Kirkman, the creator of The Walking Dead, was unavailable to comment when Inverse attempted to find out if he had ever thought about zombie dicks.