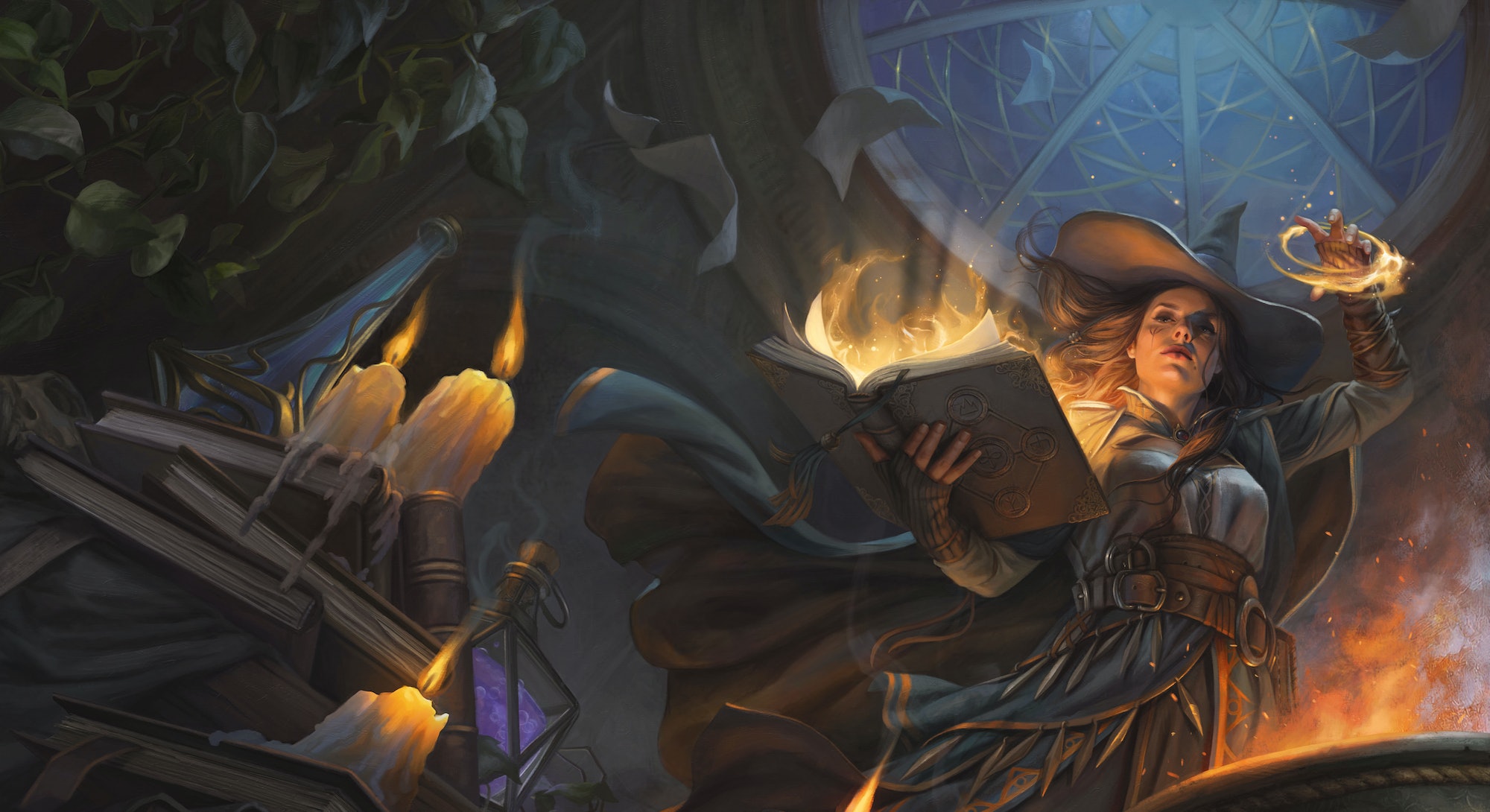 The wickedest witch in all of Dungeons & Dragons is about to become even more of a power player.

Any Bard or Wizard in D&D who's used the magic spell Tasha's Hideous Laughter to incapacitate their enemies with fits of giggles might be aware of the wizard's legacy within the world of Greyhawk. The fiendish witch queen is the focus of the biggest D&D sourcebook expansion to 5th Edition's rules, subclasses, and more since Xanathar's Guide to Everything in 2017.

On Monday, Wizards of the Coast announced Tasha’s Cauldron of Everything will be released on November 17, 2020. The book will feature 192 pages worth of new rules, subclasses, mechanics, and more all annotated by Tasha herself — or should we say Iggwilv? Anyone who's been following the new rules and subclasses from Unearthed Arcana that have been playtested over the last year or so will be pleased to see that pretty much all of them will become official D&D canon this fall when the new sourcebook is released.

True to the legacy of Xanathar's Guide to Everything before it, Tasha’s Cauldron of Everything focuses more on an expansive collection of new rules and features as narrated by the title character rather than anything that resembles a straightforward campaign. Don't expect any epic stories or new locations like we've gotten in Eberron: Rising from the Last War or will get in the upcoming Icewind Dale: Rime of the Frostmaiden. If there's a story here, it's the glimpses of Tasha's backstory we get through her sly commentary.

"Just as Xanathar commented on things in his Guide to Everything, Tasha comments on the different bits boiling inside her cauldron!" lead designer Jeremy Crawford said in a press preview for the book. Just like its spiritual predecessor, Tasha’s Cauldron of Everything will be 192 pages of commentary from an evil character with very strong opinions about the best ways to summon elementals and demons from other planes of the multiverse.

Tasha’s Cauldron of Everything deepens the number of character customization options with new feats, spells, and subclasses you might expect, and includes expanded rules for interesting mechanics like sidekicks and supernatural environments. Here's a closer look at what to expect from the new sourcebook.

Who is Tasha and why is her cauldron "everything"?

D&D features a number of different campaign settings, or worlds, that players can explore like Eberron and Faerûn, but over in the world of Greyhawk, Tasha is a mage who was raised by Baba Yaga, a chaotic and frightening witch with sentient teeth. A long-time frenemy of fellow wizard Mordenkainen, Tasha grew up into a powerful archmage who ruled an entire nation as its Witch Queen before transforming herself into a demi-god called Iggwilv.

This dramatic rebranding, however, isn't really necessary backstory for Tasha’s Cauldron of Everything. Different aspects of her personal history have been featured in past iterations with the occasional contradiction, but this new book aims for a depiction of the character that should resonate with everyone. And it's more about overall flavor than it is committing to a singular version. Tasha, a chaotic evil character who is one of the most powerful archmages in the multiverse, is the source of many legends and tall tales.

Nods to her past are incorporated throughout the book — which is again written from her perspective — but Crawford stressed that the overall focus is more on the many new rules presented and Tasha's comments on them that give “glimpses into her rich history.”

Aside from Tasha's Hideous Laughter, she's credited with the creation of many different spells written in the Demonomicon of Iggwilv, an evil tome of necromancy that appears in the book as a magical item. New Tasha spells will also appear, including Tasha’s Caustic Brew and Tasha’s Otherworldly Guise.

Tasha’s Cauldron of Everything rules and subclass additions

Perhaps the biggest draw of all in Tasha’s Cauldron of Everything will be the addition of 22 new subclasses for every class in the game, including the relatively new Artificer class, along with reprints for the following:

The various Psionic spells and subclasses featured earlier this year in Unearthed Arcana will be present in the book, including the Psionic Mind Sorcerer subclass and many others. Artificer is also getting a fourth official subclass: the Armorer. Its inclusion implies the book will also contain Circle of the Stars for the Druid and the Fey Wanderer for the Ranger, two subclasses that appeared alongside Armorer in some of the UA playtesting documentation.

There will even be a "selection of features you can add to the base class itself," so rather than customizing a character via a traditional subclass, there will be adjustments that can be made directly to the class — a bold choice that could stand to really shake-up the game overall. Customization is getting even more robust in 5th Edition.

One of the more unique additions in Tasha’s Cauldron of Everything is a set of variant rules that allow players to customize their own unique origin story that has a mechanical influence on the player's stats and expertise. Typically, a player's Class, Race, and Background are somewhat rigid characteristics that determine what Skills they are proficient in. But Tasha wants you to have more freedom when it comes to designing an even more unique story than that.

“Just as Tasha herself had this amazingly magical origin, many D&D characters have special origins that their players come up with, backstories that set one character apart from another," Jeremy Crawford said in a press preview for the book. "We wanted with this book to give players the tools they want in the game to create their character in a more customized way."

In more concrete terms: At the start of the chapter on character customization, players will find a template they can use to create a "Lineage" that's not directly connected to typical race and background options. Players will be able to incorporate and modify specific racial traits from across the myriad of options to "better reflect the story you have in mind for the characters," Crawford promises. It'll also come with many new Feats for players to choose from.

There's even a “de-Eberroned” version of the Group Patron mechanic that originally appeared in Eberron: Rising From the Last War that allows for adventuring parties to begin a campaign with a shared origin story. And for any Paladins out there who have dreamed of having their own squire, Tasha’s Cauldron of Everything also includes expanded rules and new character classes for NPC sidekicks, allowing for more streamlined ways to run campaigns with one to three players.

All things considered, Tasha’s Cauldron of Everything already feels like a must-buy as the most important D&D book of 2020 that players will be referencing for many years to come. Wizards of the Coast is hosting an online gaming event from September 18 to 20 called D&D Celebration, through which players will be able to experience some of these subclasses two months early.

Tasha’s Cauldron of Everything will be released on November 17, 2020.