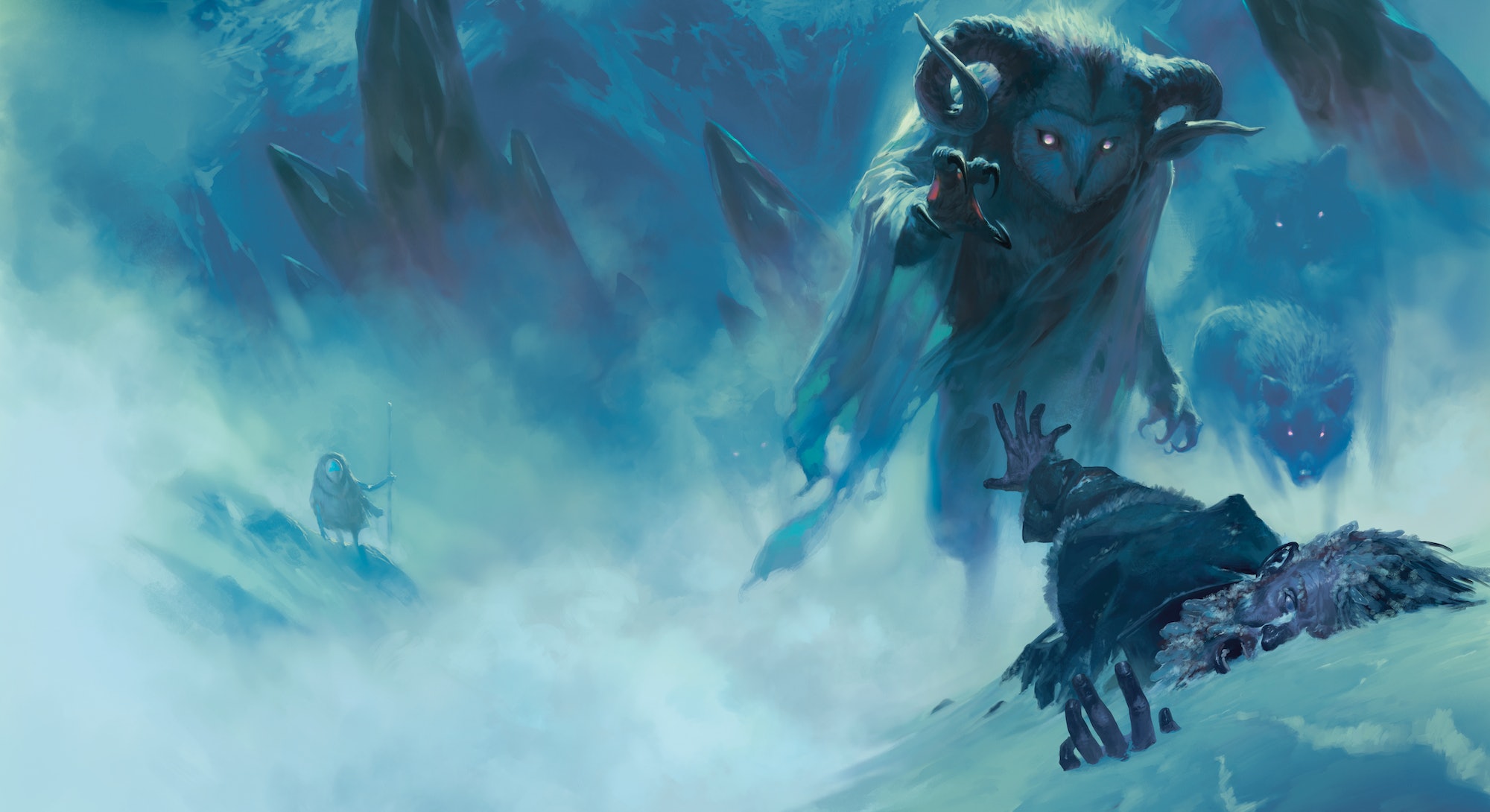 If you've ever longed for a Dungeons & Dragons adventure that resembles exploring north of the Wall in Game of Thrones, look no further than the latest sourcebook announced Thursday. Icewind Dale: Rime of the Frostmaiden is a new story for D&D adventurers level 1 through 12 full of secrets and icy monsters inspired partly by John Carpenter's The Thing. Could Jon Snow even handle it? Probably not. But we'll find out this fall.

Wizards of the Coast revealed the new book during D&D Live 2020 on Thursday, confirming rumors from early June that Dungeons & Dragons would return to the frigid region of Icewind Dale. Billed as a bone-chilling "modern horror" story by D&D Senior Producer Chris Perkins in a press preview for the module, Rime of the Frostmaiden draws several easy comparisons to the widely loved Curse of Strahd module. Except rather than Gothic horror, Perkins notes that this story draws inspiration not only from The Thing, but also from H.P. Lovecraft's At the Mountains of Madness, Ridley Scott's Alien, and Stanley Kubrick's The Shining.

Players can expect totally new environmental mechanics, a slew of icy new monsters, and so much more.

Here's everything you need to know about the next major D&D book.

Icewind Dale: Rime of the Frostmaiden will be released on September 15, 2020.

Wizards of the Coast releases a major sourcebook that same week every year, and each annual D&D Live event in recent years has served as a major preview for the next book. Before Descent Into Avernus in 2019 it was 2018's Waterdeep: Dragon Heist. And before even D&D Live became an annual celebration, Tomb of Annihilation was released in mid-September 2017. Fans have come to expect a lot from whatever book is released at this time of year, and Rime of the Frostmaiden won't disappoint.

Baldur's Gate: Descent Into Avernus plunged D&D players into a hellish and fiery Mad Max-inspired landscape, so if 2019 was fire, then 2020 is definitely ice.

"Icewind Dale" refers to a specific region of the Forgotten Realms in the far north of Faerûn, and it's a well-trodden winter setting in wider D&D lore. Gamers will be able to visit later this year in the Dark Alliance action video game that overlaps with R.A. Salvatore's Icewind Dale Trilogy of novels following the exploits of Drizzt Do’Urden and the Companions of the Hall. Rime of the Frostmaiden takes place about a century after these stories. "There are nods and winks to Drizzy's adventures," Perkins promises. "People remember him."

In plainer words, the events happening in Rime of the Frostmaiden occur circa the 1450s DR (or "Dalereckoning") in the Era of Upheaval when many gods are dead or dying, and it's a period of reconstruction for the many races of the world.

"This is a harsh and unforgiving land of fierce tundra yetis, barbarian tribesmen, roaming giants, and ten small towns of tough people from across the Realms who are dedicated to carving a living from the ice and snow," Wizards' official description of Icewind Dale reads. "The barbarian tribes follow herds of reindeer, and the people of Ten-Towns fish the clear, frigid waters of their half-frozen lakes while the towering peak of Kalvin’s Cairn keeps watch over all."

The "Rime of the Frostmaiden" part of the title is a bit more mysterious. "The 'Rime' part of it is a play on words that hints at the frigid cold and frost that covers everything," Perkins explained. "Her ice-cold touch can be felt everywhere in this adventure." Literally, a rime is "frost formed on cold objects by the rapid freezing of water vapor in cloud or fog," but it takes on a supernatural meaning when associated with the Frostmaiden, a "powerful entity" that Perkins says "some would call a god." She embodies winter's wrath and cruelty, and has long been associated with this region of the world. In wider D&D canon, she's also called Auril, and rest assured she's an evil being in every version.

"The tale of dark terror revisits the forlorn, flickering candle lights of civilization known as Ten-Towns and sheds light on the many bone-chilly locations that surround these frontier settlements," the module's official description reads.

The main plot hook in Rime of the Frostmaiden sounds like an interesting riff on Game of Thrones: Winter isn't ending when it should, and if it just keeps getting colder, life as the people of Icewind Dale know it may cease to exist. Instead of the Night King, it's the Frostmaiden who's causing these many problems.

"The future of Ten-Towns stands on the edge of an icicle, and if the players don’t intercede, they’ll all be wiped out," Perkins says. The Ten-Towns are each part of a loose confederation of competitive but cooperative settlements, and then there are the Reghed nomadic barbarian tribes to consider as well. Players will engage in a series of smaller, more personal quests to help them explore the region before the wider mysteries of the region open up.

This being a wintery wasteland where everyone has to bundle up from head to toe. Perkins and Crawford joked that a "tall figure" in a thick coat might actually be three Kobolds standing on top of one another, and some of the official art (featured above) seems to confirm that this actually happens in the adventure.

One important area for expansion with D&D storytelling at Wizards of the Coast is in recognizing and representing a diverse array in characters. Icewind Dale is a land of immigrants, so there's still a wide variety of races here. "You get to help a scrimshander and his husband for one of those standalone quests," Crawford said. "We now consider this to be a core non-optional part of our work. If you come to one of our adventures, you’re going to see a wonderful spectrum of humanity represented there."

So the story opens with a series of human stories and struggles before opening up to more powerful cosmic threats.

With secrecy and paranoia being key themes in this adventure, they're also infused into an optional part of character creation. "You can use a set of print-out-yourself cards that have secrets on them," Perkins explains. "Everyone gets one, and the only person who knows their secret is you [the DM], thereby fostering party paranoia." Every character will have a dirty little secret, and everyone knows that everyone else has one, but who do you tell?

Because Goliaths are a prominent race in this region, they've been updated and include as "important part in sections of this adventure" and as a player option for anyone making a new character. Goliaths also come with an incredibly relevant buff: Resistance to Frost damage.

"There are rules for things like blizzards, avalanches, and more mini-games in it than we have thus far published in an adventure," Crawford promises. "In-world contests and games the characters can participate in." One of these is a unique Goliath sport.

Oftentimes, the environment might present the greatest challenge, but Crawford also promises a "truck-load of frosty monsters" and that Rime of the Frostmaiden might have "more monsters than any other adventure we’ve done thus far in this edition." This will include many icy variations of classic monsters, including the Snow Golem, Snowy Owlbear, and plenty more.

Icewind Dale: Rime of the Frostmaiden will be released on September 15, 2020.