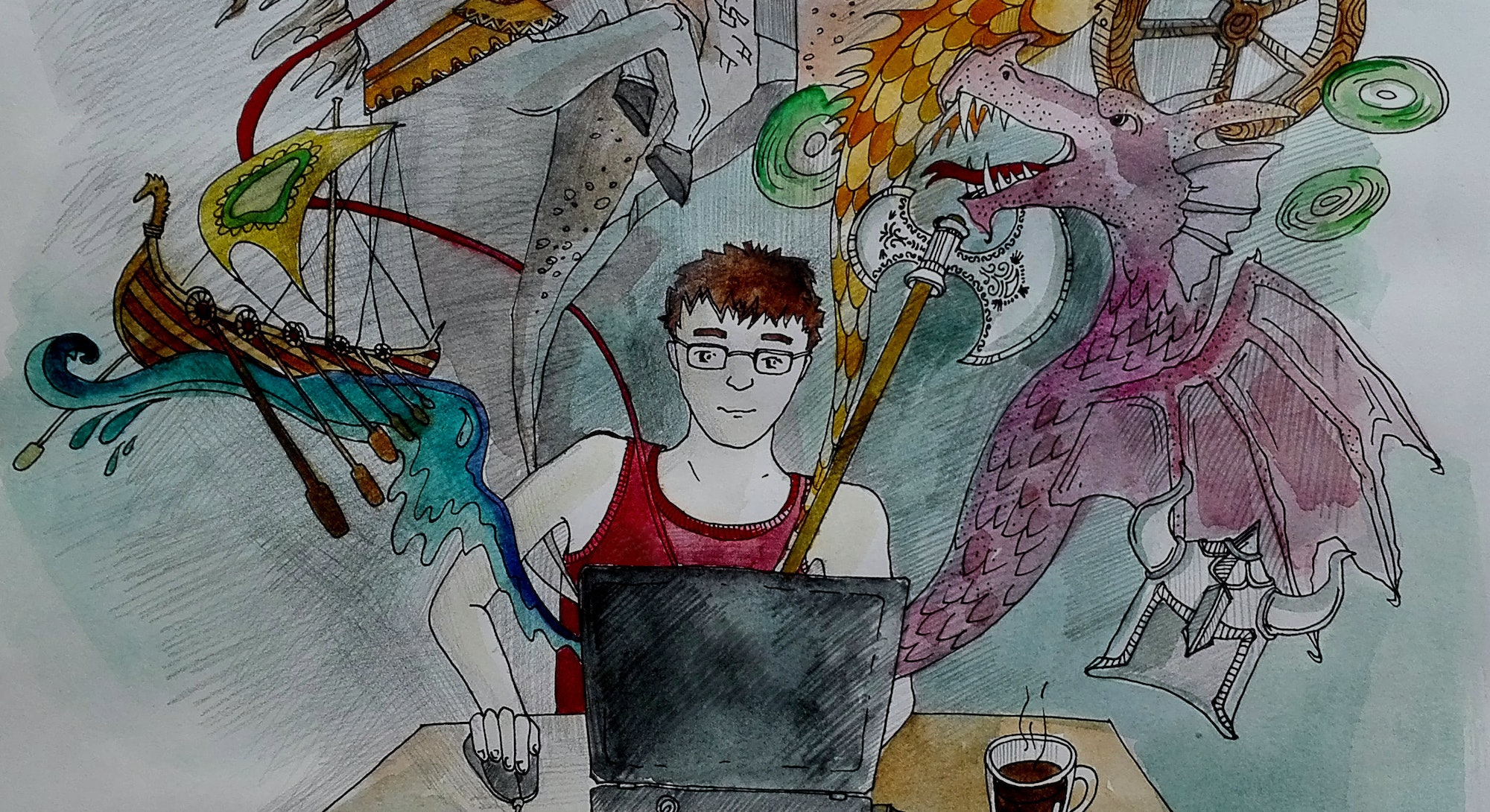 Nathan McNiff leans into his Chromebook microphone like an audiobook narrator and describes an epic story akin to the 1981 fantasy film Clash of the Titans. McNiff’s friends stare back at him through his laptop screen, hanging on every word.

Outside McNiff’s home in Woburn, Massachusetts, the Covid-19 pandemic has the world in a vise. McNiff's state has more than 38,000 cases of the virus and 1,700 of those people have died. It’s emptied streets, closed businesses, and kept friends apart. So McNiff, 37, and his friends from the Boston area have escaped into a safer world: that of Dungeons & Dragons.

“That was the first time in two weeks I forgot about the coronavirus,” McNiff tells Inverse.

As the owner of a small business, The Wandering Stage, McNiff sees Dungeons & Dragons as a distraction from stressing about his livelihood during a pandemic. “It all went away. It was the first time it wasn’t dark for the hours we played.”

“It has been the highlight of my week,” says Ashley Risteen, 29, an actress from Byfield who plays a paladin in McNiff’s game. “It’s the only time in the week when we feel present. We’re having so much fun, our attention turns away from the terror of what is happening. I don’t know how much we get that when we sit and watch Netflix.”

As people are forced inside, some are retreating to their own imaginations thanks to Dungeons & Dragons. Though binge-watching Netflix and assembling puzzles are far more common ways to pass the hours, many are playing D&D to experience their own Game of Thrones-like adventures, all over Zoom and hobby-specific platforms like Roll20.

In the process, the pandemic is changing how D&D is played, maybe for good.

[Must read: 6 D&D experts reveal how to start playing during quarantine]

The digitization of Dungeons & Dragons has been underway for as long as people have had high-speed internet. In the 2010s, D&D shows like Critical Role amassed a large audience and brought attention to D&D, hastening its digital evolution. Quarantine is now kicking that cultural shift into overdrive.

“I can feel it in the air that we’re going virtual,” says L.A.-based player Satine Phoenix, who’s hosted online D&D sessions since 2010. “This was a natural thing that was happening.”

With the pandemic, player groups including McNiff and Risteen’s in Massachusetts have been forced to go online. Others like Phoenix are already attuned to online D&D, citing frequent travel as a reason to pivot. Before the pandemic, it was a meme that players could never agree on a time to meet. Now, that barrier has vanished.

“No one can go anywhere,” jokes McNiff.

But while even the dice rolls are virtual, many D&D players still prefer the tactile feel of the game, and the experience of playing in-person. It’s why some say D&D will never be an “online” game, even when it’s never been easier to play that way.

“People who like to hug and play around a table are still going to want to play at a table,” Phoenix says.

Social distancing is rebooting Dungeons & Dragons. Spurred by the 2014 release of the lucrative “Fifth Edition” version that made D&D more accessible, the pandemic has transformed a 46-year-old game played with dice and pencils into something more like an online video game.

“Fifth Edition has been the most successful version of the game,” says D&D executive producer Ray Winninger. “It, fortunately, happened to land in a place where it’s easy [to play] in situations we find ourselves now. When we’re all isolated, D&D is a great opportunity to maintain a connection with people you’re close to.”

Unlike previous versions of the game released in the 1970s and 1980s, Fifth Edition emphasizes creative freedom over complicated rules.

“Everything about this game requires communication,” says T.J. Storm, a Hollywood stunt actor who’s played since Second Edition (1989). “I could play League of Legends with friends and not say a word for hours. In D&D, you have to be involved. Everything I’ve learned about my friends has been at the D&D table.”

Prior to the pandemic, Pokorny’s company Dwarven Forge raised millions on Kickstarter making 3D terrains for players, enabling them to add depth to 2D dungeon maps. “It’s a game of teamwork. This is a time of great obstacles, and this is something gamers are good at: Solving problems.”

Imagination is a powerful spell. As the game not only fosters creativity but requires it, Dungeons & Dragons is recognized as a viable treatment for mental health. Phoenix says D&D’s healthiest qualities are what people need now more than ever. “I call it my fountain of youth,” she says. “It’s healthy to keep your brain active. Because we are in quarantine, it’s extra important to reach out to your friends and play.”

In the D&D community, Phoenix is open about her post-traumatic stress disorder and depression. She is writing a book about how D&D aided her healing, and believes the coronavirus is a new trauma that will impact a generation. “This isn’t going to be the first trauma for a lot of people. It’s not going to be the last,” she says. “We need something to latch onto, to actually accomplish. That is so important for mental health. Maybe we can’t put pants on today, but we can fight that dragon.”

“I can feel it in the air that we’re going virtual ... This was a natural thing that was happening.”

McNiff agrees. His group stays focused on their characters even offline, a distraction other games rarely offer.

“If you meet for Monopoly or Clue, you don’t think, I’m going to play Professor Plum next time. D&D gives you the opportunity to think about character or plot all week,” he says. “And the thoughts you’re thinking, you can accomplish.”

Like any hobby, D&D is escapism. It just so happens to be very good at the “escape” part. “It helps you be somewhere else,” says B. Dave Walters, author of the Dungeons & Dragons comics. “We feel freaking helpless. We’re bombarded by an invisible adversary and the only thing we can do is literally nothing. More than ever, to be able to say, ‘I’ll hit them with a fireball’ is a very needed outlet.”

Wizards of the Coast has employees working (from home) to release free content to engage players.

“We’re scrambling to keep up,” Winninger says. “March [was] horrific for businesses, but we’ve had our best months ever. There’s clear evidence there’s lots of D&D activity, lots of people are turning to play in quarantine.”

Walters, who works closely with D&D, adds: “I won’t bust out their numbers, but their numbers are up, up, up. Anecdotally, people are doing it. Fantasy is a refuge. It always has been.”

Wyrmwood, a tabletop company renowned for its exotic wood craftsmanship, told Inverse via email the company has “not seen a negative impact” in sales since the pandemic. “We’re cautiously optimistic,” said co-founder Edward Maranville. In March, Wyrmwood documented on YouTube how it (temporarily) laid off its workforce and implemented measures to encourage physical distancing.

Not everyone is weathering Covid-19 so well. Pokorny is candid about Dwarven Forge’s challenging future ahead.

“We’re gonna take a hit this year, financially,” Pokorny says. “We worry because we’re a high-end terrain company. Nobody needs terrain to play. We’re worried how this year will be. We hope we don’t have to lay anyone off.”

“Gaming is a passion,” he says. “Maybe it’s a way to signal hope, that this too shall pass, and we will all be sitting at the table again.”

"Fantasy is a refuge. It always has been."

If there’s a sliver-lining to the coronavirus for D&D players, it’s that staying inside to play isn’t just beneficial to flattening the curve, it’s also helping them regain a sense of agency and a connection to loved ones who are painfully far away.

“I make choices in the game I do not get to make in my life,” Risteen says. “The imagination is a muscle that isn’t always flexed. It’s a millennial thing, we’re so obsessed with being productive.”

She adds that the game gives her brain a break, and she can’t wait to return to McNiff’s table, whether virtual or for real.

“We are overwhelmed,” says McNiff. “There’s nothing you can do that lets you solve the problem. D&D is one of those things where you can solve that problem. You can save the day. It can be a very cathartic experience to feel, Whoa, I did something.”