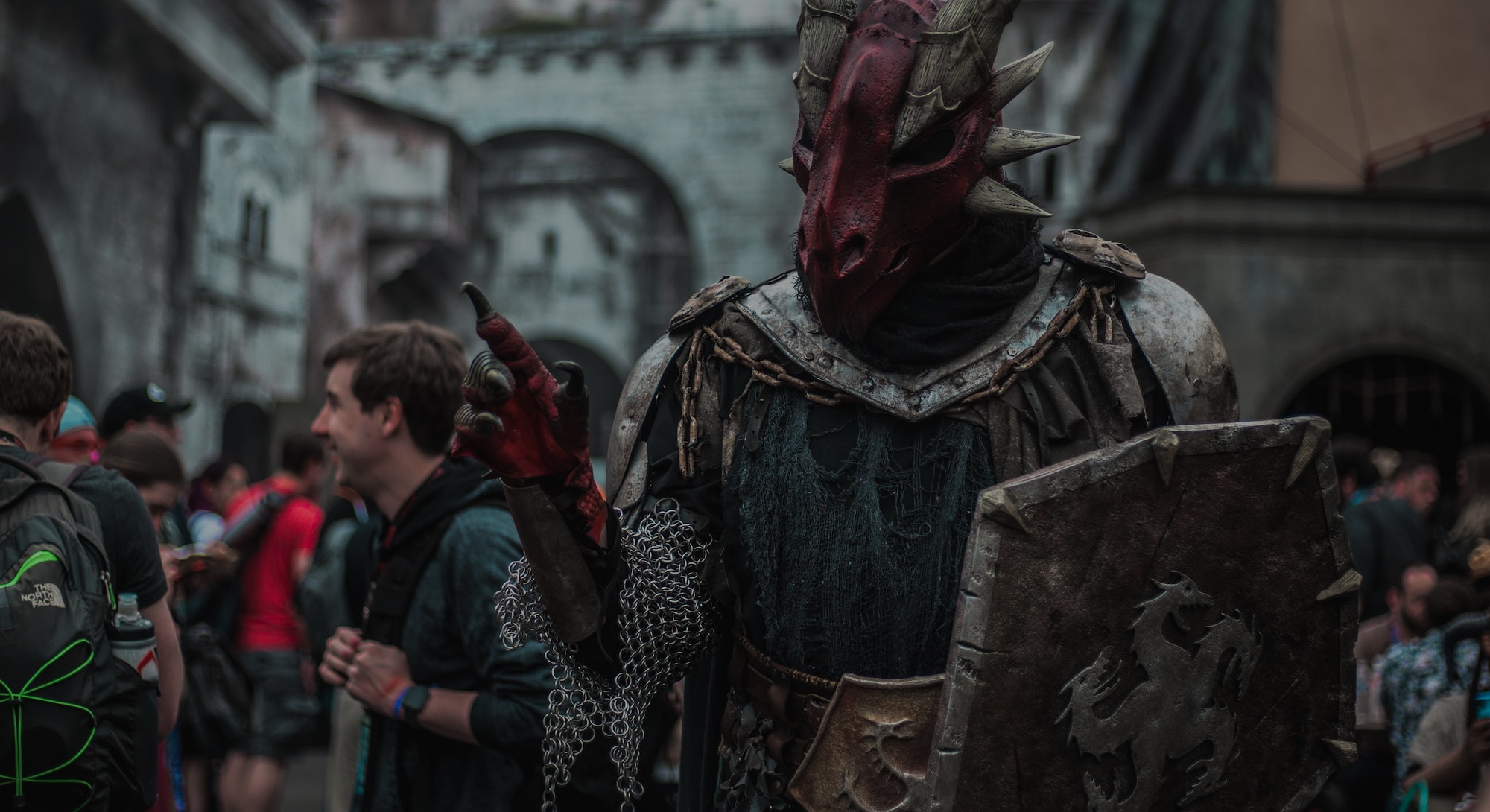 Inside an air-conditioned TV studio in Hollywood, a colossal stone castle looms large surrounded by blooming hellfire. Sleek black leather chairs, the kind often found in a Wall Street meeting room, sit behind a long oak table beneath dynamic lights and high-definition cameras on 15-foot cranes. This is hell, and the cameras will go live tomorrow.

Over the next three days, a few hundred people — and a million more tuning in at home — will come in and out to watch celebrities and online personalities play Dungeons & Dragons. This is D&D Live, an annual celebration of the 45-year-old tabletop role-playing game where the newest of new media revere a game still best played with pencils, paper, dice, and friends.

It’s also here where the people behind the game talk candidly about what’s to come. “This is the pivotal point,” Nathan Stewart, senior director of Dungeons & Dragons, tells Inverse. “This is a dream.”

At D&D Live 2019, to get a sense of the past, present, and future of Dungeons & Dragons, Inverse spoke to various Wizards of the Coast employees. Their answers illustrate a franchise hitting its stride after four decades, with plenty of potential for growth online and around the world.

Due in no small part to the mainstreaming of geek media — evidenced by the billion-dollar success of Marvel Studios and Game of Thrones — Dungeons & Dragons is not only a thriving game but a cultural powerhouse. Twitch, YouTube, and podcasts have spawned cult shows where people play the game, such as Acquisitions Inc. and Critical Role, to a ravenous audience. The latter show, starring charismatic voice actors from video games and anime, recently raised a record $11 million on Kickstarter for an animated series based on their first campaign.

A gathering like D&D Live is just the consequence to becoming cool. Hosted by Seattle-based publishers Wizards of the Coast, “D&D Live 2019: The Descent” has beckoned fans to hang out, demo the new adventure (out in September), and meet its most famous enthusiasts. Joe Manganiello, whose ab muscles graced the screen in Magic Mike, and Deborah Ann Woll, star of Marvel’s Daredevil, are just a few of the most devoted players of D&D from Tinseltown.

How did we get here? Many nerdy pastimes haven’t caught the same cool wave as D&D. What makes rolling 20-sided dice to slay orcs different? To Wizards of the Coast, it’s not just TV shows like Stranger Things that made the game hot. According to key people at Wizards, it was the 2014 release of the game’s Fifth Edition, or “5e,” where the company saw a trajectory that’s only gone up, up, up.

“We knew we were on the course,” adds Stewart, “but as soon as Fifth Edition came out, that’s when we knew it caught fire.”

Unlike previous editions of Dungeons & Dragons, “5e” is commonly understood to emphasize creative storytelling over the more pedantic rules of gameplay. This enables players to have exactly the escapist experience Dungeons & Dragons has promised gamers for 45 years.

Liz Schuh, head of publishing at Dungeons & Dragons, also credits live-streaming for changing the game. “It was a real revelation,” she says. “Live-streaming pulled the curtain back on what people thought was this mysterious hobby. That went away when live-streaming became popular.”

Five years after the release of 5e, the game is more popular than ever, its passionate community a testament to its accessibility. That’s how, in 2019, D&D — once a secret like in Fight Club, where no geek dared talk about it in public — can now fill a studio with a half-convention, half-theme park experience. On the Saturday of D&D Live, an immersive marketplace with theater actors, who happen to be veteran Dungeon Masters, appeared in costume to entertain attendees.

D&D Live was conceived several years ago by Wizards of the Coast, when the company entertained the idea of hosting its own convention. Comparisons to bigger gaming conventions like Penny Arcade Expo (PAX) and BlizzCon are brought up.

“Five years ago, some people from my team put down on paper what we wanted. We wanted a geek celebration,” says Stewart. “We go to cons and stuff, but we didn’t have a community thing. We started small.”

The first “D&D Live” events were panels involving a live session at PAX. Then, in 2017, the company held a weekend livestream, “Stream of Annihilation,” which didn’t have attendees. A year later, Wizards opened up the event to fans but didn’t slot time for them to try out the new adventure. For 2019’s “D&D Live: The Descent,” fans spent Saturday morning and afternoon roaming the underworld as they played an abbreviated version of Descent Into Avernus.

2019 is “the first year,” Stewart says, what Wizards expect future D&D Live weekends to look like. “This is the culmination of, like, three years of practice.”

No one at Wizards can say they saw Dungeons & Dragons becoming what it is now. There’s no magic scroll that predicts the future. But that’s still no reason to not ask what the future of the game might be. According to Wizards, the future doesn’t lie in virtual reality or a cinematic universe, though a new feature film remains in development at Paramount.

"“Live-streaming pulled the curtain back on what people thought was this mysterious hobby. That went away when live-streaming became popular.” — Liz Schuh, head of publishing at Wizards of the Coast

Adam Bradford, general manager of D&D Beyond — a digital toolkit for players — says “the biggest roadblock” to D&D augmented and virtual reality is “availability of the technology.”

“That’s not a tree we’re barking up right away, but it’s something we’ll pay attention to,” he says. Rather than see technology as a replacement for paper and pencils, Bradford says Wizards is aiming to use technology to “help mitigate the worst part” of gaming, i.e. “taking too long to look up things or whatever else.”

Apparently, people still like paper and pencils. “If you asked me five years ago, I might have said we’d transition to an all-digital product,” says Schuh. “But when you’re at home, dreaming of your next campaign curled up in a chair, it’s a different use case than digital. You’ll bring your character on your phone because it’s convenient. Both still have a place in people’s hearts and homes.”

“Turns out there’s millions of people who really like books,” adds Stewart. “They like the tactile feel and the art and craft of it. We don’t do PDFs because it’s a bad experience. That’s why we’re not there.”

What Wizards of the Coast sees in the future is expansion outside the English-speaking world. Although the game already has healthy fandoms in Europe and Australia, the company says they’re looking into South America and Asia as their next big destinations.

“International growth is important. It’s high on our list,” says Chris Perkins, senior story designer for Dungeons & Dragons. He says D&D “indexes heavily” towards English-speaking territories, with popularity in Australia being a more recent phenomenon. “The next set of languages we want to go after are Latin based and Chinese based.”

Adds Stewart, “Spanish, Portugese, Chinese, these are all very big opportunities for us. We’re looking at [those] 100 percent.”

Ironically, it’s overseas where digital tools may play a bigger role than it does in the US.

“We take for granted sometimes in the US getting people around a table with enough room for minis and stuff like that,” explains Stewart. “In lots of other countries, that’s not very practical.”

As of now, the game boasts some 40 million players around the world. That’s higher than another massive fantasy phenomenon, World of Warcraft, which had just 12 million active players in its heyday. While D&D doesn’t have Fortnite numbers (250 million players), it’s a mighty impressive size for a game that’s nearly five decades old and doesn’t require wifi.

“I don’t think the growth stops soon,” says Stewart. “We’ve got so many stories yet to tell.”