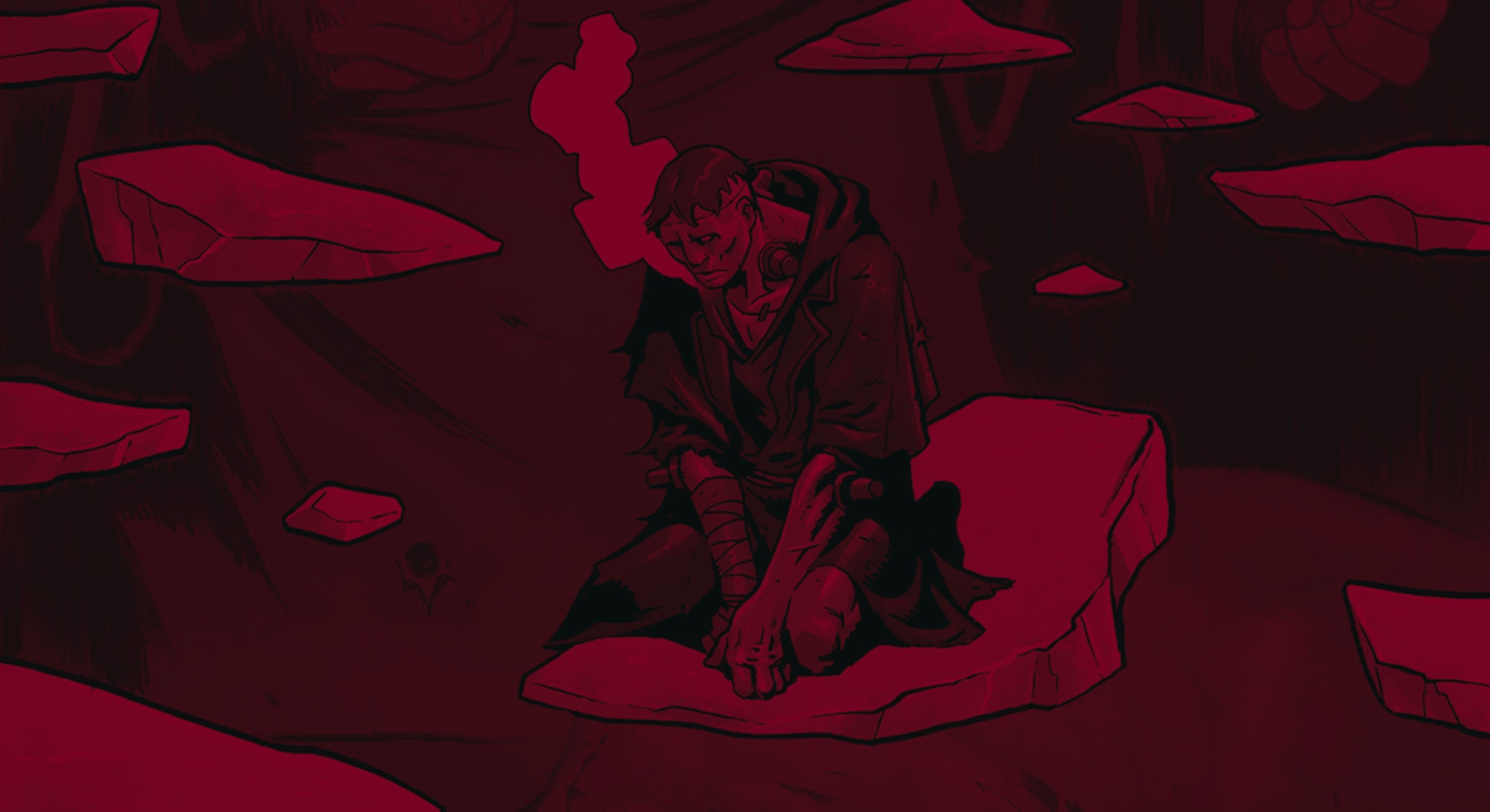 The watery-eyed wretch that sprang from Mary Shelley’s vivid imagination one infamous stormy night on the shores of Lake Geneva in 1816 is returning to comics to give the Mignolaverse a distinctive Frankenstein twist with Dark Horse Comics’ Frankenstein Undone. The intriguing five-issue miniseries arrives on January 29 and begins with the lonely monster ruminating over his tortured existence while within the Arctic’s icy embrace.

The plotline acts as a prequel to Underground, melding narrative events in Shelley’s 1818 novella with a fresh horror adventure as the reanimated creature believes he’s found some comforting companions, only to be ripped from that world and into the weird domain of Big Red.

According to Hellboy creator Mike Mignola, a new Frankenstein comic was an opportunity to expand his intricate shared universe in a new direction.

“I fleshed out a bit more of the history of the “Hellboy Universe,” mostly regarding ancient Hyperborea and the Heliopic Brotherhood of Ra, but very little about the actual history of the Frankenstein monster himself,” Mignola tells Inverse. “I referenced the original novel a couple times, but when Underground takes place (1956) the monster has been running around for more than 150 years. What the hell has he been doing? Scott Allie and I wanted to know.”

“We wanted to tell our version of the monster's history and, at the same time, reveal more of the history of our odd little Hellboy world,” he continues. “And we are thrilled to have the great Ben Stenbeck back, once again breathing sad life into our tragic hero.”

Inverse also chatted with series editor Katii O’Brien, who worked closely with the entire creative team to craft a cohesive Frankenstein yarn injected with a solid dose of Mignolaverse magic. Read the full interview below.

How did you approach this Dark Horse prequel and did this new Frankenstein miniseries push the creators' craft in new directions?

This book has a unique feel from Frankenstein Underground as well as our other books for a few reasons, one being a different mix of creators with script and color, and the other being that this is a prequel that shows us a very different Frankenstein from what we know. In our first book, there is so much everywhere Frank goes, so much that he is seeing and learning about the world underground. This story has more space, Frank is solo for much of the first issue (aside from some animal companions) and Ben’s art really evokes that solitude.

Where did Ben Stenbeck draw inspiration from in designing his undead monster and what stylistic elements were important to you as an editor?

Mike did the initial design of his version of Frankenstein for Hellboy: House of the Living Dead, for artist Richard Corben, and Ben did his own take on it for Frankenstein Underground. Between Mike, Richard, and Ben, we have three very different styles, so each version has slightly different body shape and texture. Frank is actually younger in the new series, since it takes place earlier, although he’s still “a corpse with a conscience,” as Mike has described him before.

Why are Hellboy and Frankenstein kindred spirits of a sort and what about the characters triggers creativity?

They do feel like kindred spirits, both unsure of their purpose and at times tortured by this. Trying to be good, trying to do good, it’s all very relatable and it’s a story that never gets dated.

Did you deviate from 2015’s Frankenstein Underground’s art style and color palette for Brennan Wagner’s colorist work here or keep the visual continuity?

We’re happy to have Brennan on the team, and he’s done a beautiful job on the series. The palette is very different, in part because of the setting being so vastly different from Frankenstein Underground. This series starts out in the Arctic, so the color is much cooler, and the art suggests a vastness and emptiness as Frank wanders on the ice.

What is so enduring about the Frankenstein mythos and why does it still resonate with readers despite the medium?

I don’t know if people will ever stop asking what it means to be human, or what it means to be a monster. Shelley’s novel is a perfect examination of grey areas between these two sides, and the character has gone on exist is so many iterations since the novel because we can’t stop wrestling with this idea. In the first of our books, Frankenstein Underground, we see the creature (who we call Frankenstein in our version) calling himself a “thing,” and questioning his own humanity.

But that story takes place long after the events in Shelley’s novel, so in this new series, we’re going back before Underground, to the time just after Shelley’s novel ends and our version of Frankenstein begins, and we’ll see Frank asking these questions of himself when he’s on his own for the first time.