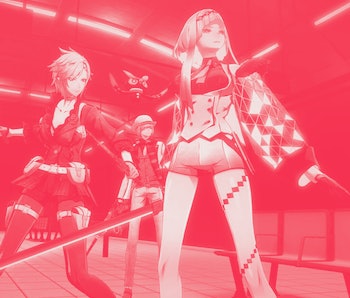 Soul Hackers 2, the sequel to the 25-year-old Devil Summoner: Soul Hackers, will be released on August 26, 2022. The game itself has a charming cast of characters but can’t make up for the lack of gameplay variety. There’s simply not enough to do in the world. But developer Atlus has a solution for fans: Just pay an extra $9.99 for a “bonus” story expansion that will be released on day one alongside the base game.

I spent time playing through the “Lost Numbers” story arc to get a better sense of how worthwhile it is to buy the Soul Hackers 2 DLC. Regrettably, it is surprisingly good.

Having fun, but not happy about it

I don’t want to like the Soul Hackers 2 DLC. On principle, I am against Atlus charging fans who buy the base game to access so-called “bonus” story content that addresses many of the issues I had with the game in my review:

Soul Hackers 2 trims too many systems leaving only a bare-bones experience. While the game world is dripping in cyberpunk style, and the characters are a breath of fresh air in an Atlus game, the lack of diversity in gameplay leaves Soul Hackers 2 feeling eerily empty.

Soul Hackers 2 isn’t just a game in need of a soul, it is a game in need of a body to house that soul. As it exists at launch, the game contains a straightforward plot and two different kinds of side quests that boil down to fetch quests. Without demon negotiation, social links, or the complexity in the Press Turn combat system of Shin Megami Tensei, there is nothing for players to exercise any sense of agency within the gameplay. It also makes for a game that challenges you to not get burnt out on its repetitive dungeons.

“Lost Numbers” addresses these issues — not entirely, but just enough to breathe a glimmer of life into Soul Hackers 2. Those who purchase the bonus story arc (available for $9.99 standalone or bundled with various premium editions of the game) get access to a series of new requests at Club Cretaceous that tell the story of the young devil summoner Nana who is searching for information on her missing father.

Nana herself does not become a party member in the traditional sense, but whenever exploring a dungeon that contains a request from the “Lost Numbers” questline she will take a combat turn at the end of your round, making her own decisions on how to act. She is a great addition to the team; younger than the rest of the team, she teases out new dimensions of your party members that are lovely to see.

In addition, the quest being slowly given to the player in requests as they level throughout the main story opens a great alternative to constant main story progression and feels like a pleasant change of pace even if it is still confined with the same dungeon-crawling combat. ‘Lost Numbers’ even adds an entirely new dungeon exclusive to the DLC whose design is different from any of the three repetitive dungeon designs you are stuck with through most of Soul Hackers 2.

After feeling burnout on Soul Hackers 2 by the time I rolled credits (which was only 25 hours), “Lost Numbers” has made me enjoy booting up Soul Hackers 2 again.

Should you buy the “Lost Numbers” DLC?

So, the ten-dollar question. Or, if we want to be specific, the question that will cost you $9.99 for the story DLC, $69.99 for the Digital Deluxe Edition, or $89.99 for the Premium Edition that includes “Lost Numbers” and all the other DLC content releasing alongside the base game.

Should you buy the Soul Hackers 2 DLC?

It’s complicated. I know that isn’t the definitive answer that is satisfying but it is true. If I were a paying customer I, personally, would not buy the ‘Lost Numbers’ story expansion or any of the other available DLC. It just rubs me the wrong way that Atlus is charging fans for content that feels essential to having a balanced and fun experience playing Soul Hackers 2.

If you are the kind of person who only buys one big AAA game every few months at full price, and Soul Hackers 2 was one of those few games that you are getting this year, then the DLC might be worth it. At $9.99, “Lost Numbers” is one-sixth the price of the full game. With the amount of content that it does add it might be essential to keep you satisfied with your purchase as you log more hours dungeon crawling.

At the end of the day whether the DLC is a good fit depends on your specific situation. But this doesn’t address the root of the issue, which is Atlus offering up this DLC in the first place. Players shouldn’t have to pay extra on day one for content that makes a game more playable when its inclusion in the base game would have made Soul Hackers 2 a more worthwhile experience from the start.