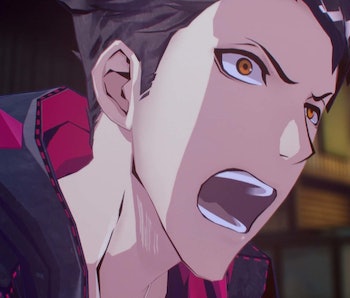 Soul Hackers 2 is the latest RPG under the Shin Megami Tensei umbrella from Atlus. But before the game’s release on August 26, Atlus announced day one paid DLC for Soul Hackers 2 that includes an entire “bonus” story arc.

Some of the biggest criticism Soul Hackers 2 has faced in reviews point to the lack of meaningful content or variation in gameplay. Having both ready at launch for players is great, but forcing players to pay extra for it is a bad look for Atlus that sets a dangerous precedent for the wider industry.

What is included in the DLC? — Day one DLC is a common occurrence. Mostly it is reserved for cosmetic add-ons or pre-order bonuses. Soul Hackers 2 does have some of these, but paid DLC at launch is over-the-top.

Including in the DLC is a collection of costume packs for the Ringo and company that put them in various outfits from previous Shin Megami Tensei and Persona games, not to mention the essential swimsuit pack that makes everybody vacation-ready.

The biggest addition, however, is the “Lost Numbers” story arc. It follows Ringo as she investigates incidents caused by a mysterious monster. With the aid of Nana, a new Devil Summoner searching for her father, they seek out demons known as Lost Numbers to solve the mystery.

In-game, the story progresses through a series of requests at Club Cretaceous from Madame Ginko. As the main storyline progresses more parts of the “Lost Numbers” arc will become available, eventually unlocking the new dungeon Hachigaya Training Field. The bonus story arc will range from levels 19-99 and culminate in what developers say will be the most difficult boss in Soul Hackers 2.

“Lost Numbers” will be available to purchase in three different ways: The Digital Deluxe Edition of Soul Hackers 2 includes the bonus story arc as well as a booster item pack for $69.99. While the Premium Edition comes in at a whopping $89.99 and includes “Lost Numbers” as well as all the other costumes, bonus items, and additional demons that the day one DLC has to offer. If you only want the bonus story, then you can purchase it for $9.99.

The solution to a problem Atlus made — There is nothing wrong with DLC. In fact, it can be a wonderful way to keep players invested in a single-player game longer than they’d normally be otherwise. Adding new story content is an exciting prospect that often leads developers to iterate on what they made in the base game. The “Minerva’s Den” DLC from BioShock 2 is one of the franchise’s best stories, and “Blood and Wine” is perhaps even better than the Witcher 3’s base game. But both came out months or even a year after the original title.

Atlus having extra story content ready to go at launch feels like nothing more than a way to charge fans extra money for content that easily could have been in the base game.

“Lost Numbers” should have been part of Soul Hackers 2 to help alleviate the game’s biggest problems. In our review, we said that the game “trims too many systems leaving only a bare-bones experience.” Most reviewers were able to roll credits in under 30 hours. By comparison, Persona 5 and other games from the SMT family can easily clock in at 100+ hours. Soul Hackers 2 feels empty, only leaving the player to trudge through monotonous dungeons for most of the game.

The entirety of the “Lost Numbers” DLC content makes it feel like a punishment to players who only own the base game. “Oh, you don’t have enough to do. Then give me more money,” Atlus is essentially telling them. DLC is meant to add to a game, giving players who have searched out every corner of a product something extra to explore. Instead, content like “Lost Numbers” is a dangerous example of how publishers can lock content behind a paywall that feels like an essential puzzle piece to completing an unfinished or lackluster product such as Soul Hackers 2.