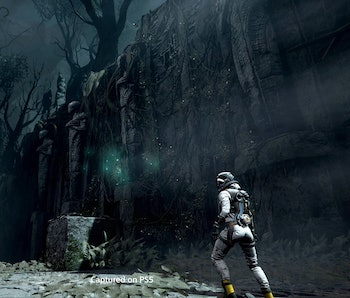 Returnal is tough. Like, really tough. The new PlayStation 5 exclusive is a third-person shooter with roguelite elements. That means that players will spend a lot of time dying and trying again in a run with a totally different layour. For those who aren’t well-versed in the genre, it’s going to require a lot of failure to progress.

Its difficulty has already turned into an early talking point for critics and fans alike. The game features an engrossing sci-fi story, but many players may drop off in frustration before they see how it all ends. That’s a shame considering what a compelling narrative developer Housemarque has crafted here.

That’s a tricky situation considering that the genre itself is built on challenge. We’ve seen that compromise is possible though — just look at last year’s smash hit Hades.

Like other roguelites, Hades is a game where players go on multiple “runs” in an attempt to escape from Hell. Like Returnal, it’s narrative-heavy and a fast-paced action game that requires twitchy fingers. It can be a demanding experience for those who aren’t familiar with the genre.

Hades developer Supergiant understood that barrier of entry, and as a result, the game has a truly special feature:

God Mode is an optional setting that gives players a permanent 20 percent damage reduction from enemy attacks. What’s special about it is that every time a player dies, that number increases by another 2 percent, eventually maxing out at 80 percent. That means that anyone who’s struggling gets a little boost every time until the game is manageable.

That feature is one of the many reasons that the game found such strong mainstream success. It’s a challenging game for players who want to push themselves, but a friendly one that understands that some just want to experience the story.

Perhaps Returnal could have used its own God Mode.

That might be a controversial idea that risks dredging up one of gaming’s worst discourses. Players have long debated whether games like Dark Souls should add an easy mode. Some argue that the challenge is just part of the game, while others feel it alienates a potentially large player base. Ultimately, game developers can and should make exactly the vision they want. Housemarque’s decision to create a blisteringly tough roguelite is theirs to make.

That preface aside, God Mode shows exactly how developers can cleverly compromise in a way that doesn’t hurt the experience for anyone. It keeps the game hard for those who want the studio’s pure vision, but respects that not everyone is capable of executing the lightning-fast button presses needed to progress. It’s a win-win situation.

I beat the entirety of Returnal naturally after 20 hours of smashing my head against the wall. I’d be lying if I said there weren’t some dark moments where I wanted to abandon it for good. Even the game’s second biome is an absolute struggle, setting the stage for a long, arduous journey. It’s a shame to think that other people out there may run into the same situation and miss out on a genuinely memorable narrative payoff.

That’s not the only area Returnal could see some improvement. Players aren’t even able to save during the game’s lengthy runs, making them feel like even more of an unforgiving gauntlet. It’s the little attention to these kinds of details that can broaden a game’s appeal and make sure players are getting the full experience out of it.

Is something like God Mode a fit for every video game? Probably not, but it provides a new way of thinking about how developers can address difficulty in games that isn’t strictly tossing in an easy mode.

After all, “hard” means different things to different people. Some people might find Returnal next to impossible, while others might blow through it without breaking a sweat. Difficulty is a personal spectrum for individual players and the more games understand and address that, the better they can be.