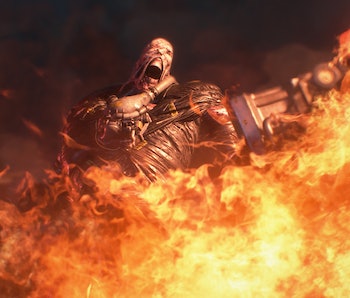 After weeks of teases, Capcom has confirmed the release date for the demo for the highly anticipated PC, PS4, and Xbox One remake of Resident Evil 3. The developer also announced an open beta date for the Resident Evil Resistance asymmetrical multiplayer mode.

In a trailer released March 16, Capcom confirmed Resident Evil 3's demo will come to PC, PS4 and Xbox One on March 19, 2020. The open beta for Resident Evil Resistance arrives later in the month, starting at 3 a.m. Eastern on March 27 for console players and running until March 3. PC players will have to wait slightly longer, as the PC beta doesn't begin until 1 p.m. Eastern on March 27.

The demo follows Jill as she works to evacuate Raccoon City's citizens after the T-virus outbreak, with the help of the Umbrella Biohazard Countermeasure Service and Carlos Oliveira. The trailer suggests this will be the same demo shown to press back in February, as shown off in Resident Evil 3's first official livestream.

Capcom confirmed on Twitter that "there's no time limit on the Resident Evil 3 Raccoon City Demo, and you can play the demo as many times as you want." That's quite different from Resident Evil 2's timed demo from 2019.

Players who complete the demo will be rewarded with a brand new trailer for Resident Evil 3. Capcom is also encouraging replayability by hiding twenty Mr. Charlie statues throughout the demo and challenging players to find them all. Nemesis is also poised to make an appearance, so we'll get our first taste of how scary he is compared to Mr. X.

Resident Evil Resistance is an asymmetrical multiplayer horror game where a group of four players must work together in order to escape a series of obstacles and enemies placed by a fifth player in a mastermind role. The only mastermind playable in the beta is Daniel Fabron, though the final game will have four playable masterminds, including Mr. X.

Fortunately, all six of Resident Evil Resistance's civilian characters are playable. (Yes, that includes the amazingly named Martin Sandwich.) The beta will be available across all platforms until Resident Evil 3 launches on April 3. If you've been a bit hesitant about this new mode because of Capcom's bad track record with multiplayerResident Evil games, this beta should allow you to craft a better opinion.

We don't get game demos as often as we used to anymore, so it's great to see that Capcom is letting players try part of Resident Evil 3 and Resident Evil Resistance early. Though the announcement could've lined up closer to the first gameplay livestream, the wait for it isn't too long, and should give players a pretty clear look at what to expect from the full game.