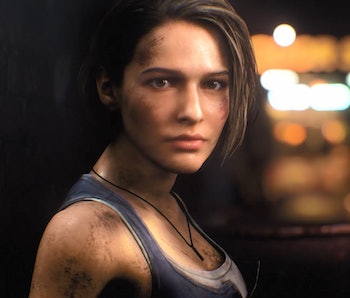 A new livestream for Resident Evil 3 ended with a totally grisly flourish, but at least it gave us a quick update on the status of the upcoming demo for the game.

The official Resident Evil Twitch account held a 25-minute Resident Evil 3 remake livestream on Wednesday, following up an episode of the Japan-based Capcom TV that aired earlier that morning. Hosted by Resident Evil community manager Kat "Katastrophe," the gameplay livestream opened with the previously released Nemesis trailer that showcases the game's story and intense gunplay. Afterward, Katastrophe took to the streets of downtown Racoon City in the PS4 version of the game.

"I know a lot of you guys are excited about an RE3 demo," Katastrophe said in response to comments asking about it, "and in the meanwhile as a demo is coming, while we're working on that, I really hope this stream can provide at least a little bit of a nice filler to make the wait easier."

Capcom confirmed in a February 25 tweet that a public demo would be released at some point, but the details remain uncertain. We're now less than a full month away from the game's release, so a demo couldn't come soon enough. By comparison, Final Fantasy VII Remake comes out after RE3, and that already has a public demo available on PS4.

The game looks like a lot of fun in action and the livestream is still worth checking out even if it doesn't reveal anything too surprising.

The community manager began by showcasing the knife, reworked dodging, and the ability to shake off zombies with a QTE. The stream goes on to highlight Jill's redesign that blends her original design with some more modern and practical elements.

The whole this is mostly a spoiler-free experience. There are no puzzles or collectible files shown, and most of the buildings shown go unexplored.

Later in the stream, Katastrophe took a moment to go over the attention to detail in the environment and the fact that there are environmental interactions that can be used to take down zombies, like hitting a generator or propane tank.

The stream's chat then chose to have Capcom end the stream by showing what happens when Jill dies. She was then sacrificed to a zombie, which tore out Jill's throat, sending the player to Resident Evil 3's death screen pronouncing "YOU ARE DEAD." The stream was fairly chill, so this was quite the brutal way to end it.

While Resident Evil 3 looks amazing and this stream did a generally good job at giving a general overview of the gameplay, it's disappointing that not much new was shown and that we don't have a confirmed demo release date just yet. Most of what we've seen of this remake has just been of this one street; hopefully we'll seem more of the game's areas before it launches. If you were unsure if Resident Evil 3 would play as well as the Resident Evil 2 remake, this livestream did a great job at squashing any possible concerns and making the game seem worthwhile.