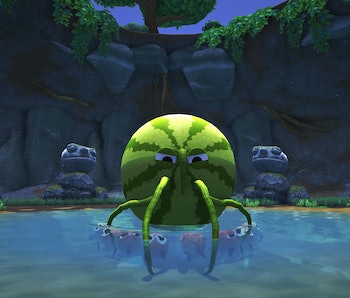 Talkin' bout Bugsnax. Free PS Plus games have been a staple on PlayStation consoles since the PS3 and PS Vita's generation. While those consoles were phased out, Sony began adding PS5 games to PlayStation Plus in November 2020. While Astro's Playroom is packaged in with every system, Bugsnax was the first free PS Plus PS5 game that members could download.

While Bugsnax was free for an extended two-month period, it will be removed from PlayStation Plus on January 4, 2021. At that time, new PS4 and PS5 games will be ushered in. If you're a fan of games like Pokémon or Ape Escape though, you need to download Bugsnax before it leaves PS Plus.

Bugsnax first caught the attention of many people when it was revealed with an odd trailer during June's PS5 showcase. It's the latest game from Young Horses, the developers of Octodad, and follows a nameless journalist as they explore a mysterious island inhabited by creatures that are part bug and part snacks.

To make things even weirder, all of the characters are Muppet-looking creatures called Grumpuses and their body will change depending on what they eat. When players arrive on the island, their leader Lizbert Megafig is missing and the Grumpuses have scattered. The player must get the group back together while they also document and catch creatures called Bugsnax.

While Bugsnax certainly elicits other games like Pokémon Snap or Ape Escape, it combines them in a unique way that's not like much else on the market. While its graphics definitely don't push the PS5 to its limits, Bugsnax has a distinct style and memorable story. The strong writing makes every character you run into relatable. Even these strange-looking creatures deal with relatable struggles like anxiety and building a community.

While the story is a major part of the experience, the fun creature-collecting gameplay is also strong. There are 100 Bugsnax spread across Snaktooth Island, and each of them has a novel design based on food in some way. They each have unique movement patterns and daily routines that players must consider when trying to catch them.

For some creatures, capturing them may be as simple as putting a simple capturing trap in their path. For the more difficult creatures, you might be attracting them by making a trail of ketchup, only to use a tripwire to stun them and trap to capture them. Every capture feels different and more evolved. While the creatures are like Pokémon, capturing them is much more similar to the process of getting the apes in Ape Escape.

It's a satisfying gameplay loop that backs up a great story, and it doesn't overstay it's welcome. You can beat the game in under eight hours, but if you want to capture every Bugsnak and see all the game has to offer, it can take up to 13 hours to finish. This shorter length and novel concept made it a perfect fit for PlayStation Plus.

While Bugsnax is also available for PS4, only the PS5 version of the game is on PS Plus. While you won't be able to play it until you get your hands on the rare next-gen console, you can at least redeem it on the PlayStation Store so it's in your library when you do get a system.

It's an honor that can never be taken away from Bugsnax. While you're at it, you can also redeem Worms Rumble for PS5, as that will also only be available through Monday, January 4. We don't know what the next free PS5 game will be yet, but it has big shoes to fill.

Bugsnax is available now for PC, PS5, and PS4.