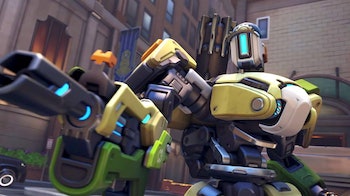 As Overwatch 2 approaches its first month of life, the game is steadily earning its place as a successor to the original Overwatch. The game still has its fair share of hiccups and bugs, leading to more than one hero being temporarily removed from the game entirely. Blizzard is aiming to address a series of issues and introduce new content to the game in an upcoming patch. Here is everything we know so far about the October 25 patch coming to Overwatch 2.

Bastion and Torbjörn are back

On October 10, less than a week into the release of Overwatch 2, Blizzard removed the hero Bastion from the game entirely and Torbjörn was taken out of competitive play. Both had to do with issues with the specific abilities of each hero that significantly broke the game. Bastion’s ultimate allows the hero to fire three artillery shells anywhere on the map, the bug made it so Bastion players could launch as many artillery shells as they wanted during the ultimate.

However, after a large rework, both are set to return fully to Overwatch 2 and competitive play with the October 25 patch. Blizzard confirmed this in an official forum post.

At the same time that Bastion and Torbjörn were removed from Overwatch 2, so was the map Junkertown. First introduced in 2017 at Gamescom for the original Overwatch, Junkertown has become one of the game’s more beloved maps.

The map was removed due to a bug that caused “graphic performance issues” according to Blizzard. However, according to the previously mentioned forum post, Blizzard will be reintroducing Junkertown to Overwatch 2 in the October 25 update.

With Halloween less than a week away, many live-service games are fully embracing the holiday spirit with limited-time events. Overwatch is no stranger to holiday events, and Overwatch 2 is bringing back the beloved Junkenstein’s Revenge Halloween event.

Overwatch 2’s first special event will begin on October 25 and give players access to the PVE Junkenstein’s Revenge: Wrath of the Bride game mode in addition to the opportunity to unlock or purchase a plethora of appropriately spooky-themed skins and accessories for your favorite hero. Check out our full guide on this year’s event here.

As a live-service team-based shooter Overwatch 2 will be constantly updated to address any imbalances. With the October 25 update being the first major patch to the game, it is likely that there will be some nerfs and buffs to heroes. While the official patch notes have not been released in full from Blizzard there are some things we do know.

One fix that is definitely coming on October 25 is a targeted change to Zarya. Specifically, the hero will be receiving an update on how she plays in the Total Mayhem mode. This mode is exactly what it sounds like: all heroes have double health, abilities cool down quicker, and ultimates charge faster. For Zarya, this makes her nye unkillable. Her bubble ability has a cooldown shorter than the actual length of the ability, meaning not much can be done to eliminate her. This will be changed in the October 25 patch.

As for other nerfs and buffs, we might see to heroes in competitive play, Blizzard insists that there won’t be any. In a blog post, the team announced that no fixes will be coming to the game until Season 2, which begins in December. “While some heroes are performing better than others, and there are differences across player skill levels, we have been happy to see that no hero’s overall power level is far out of line with our goals,” reads the blog post.

However, 2 months with no major fixes seems like a long time. Leaks suggest this statement may not end up being so true, with potential nerfs coming to Genji and Sombra. The Overwatch League will be playing on a balance patch during their playoffs which begin October 30. If this patch is being implemented in professional play, then it is likely these changes will also be patched into all servers with the October 25 update.