The newest character to join Overwatch is Hammond, a chubby hamster who will absolutely smash your face in. I’ve already spent a few hours playing as Wrecking Ball on the PTR and he’s quickly become one of my favorite heroes. Here’s everything to need to know about the game’s adorable 28th hero.

First, a little character backstory. Wrecking Ball was best buds with Winston back on the Horizon Lunar Colony, and when the gorilla uprising happened, they worked together to escape to Earth. His actual name is Hammond, but Wrecking Ball is the nom de guerre he picked up when he was rising through the ranks of the Junkertown robot gladiator scene.

Yeah, the hamster is the one who became a legendary bloodsport champion, not the gorilla. While Winston was saving the world with Overwatch, Hammond converted his escape pod into a badass battle suit. We don’t know whether the two old friends stayed in contact before the events of the game, but hopefully we’ll learn more once Wrecking Ball receives some new voice lines.

Biography aside, Hammond also happens to be an absolute blast to play. His kit is one of the most adventurous design decisions in Overwatch.

He protec but he also attac — with his big ass deathball

Hammond is a hero in the tradition of D.va and Winston, which means he’s a highly mobile tank designed to dive in and initiate fights. Groundpounders like Reinhardt and Orisa hold the line, but Hammond is the tip of the spear.

He does this through his Roll ability, and when combined with the Grappling Claw, Hammond’s mech turns into an unstoppable death ball. Grappling Claw allows you to build up the momentum of your Roll, accelerating your speed and knocking back any enemies in your path. You can also use it to swing into the air and crash down with the Piledriver ability.

Here’s a video of me slamming down on two unsuspecting players, knocking them into the air, and then finishing them off with my Quadcannons.

Hammond also has Adaptive Shield, a defensive ability that grants light-based armor proportionate to the number of enemies around you. The more enemies there are, the higher your shield charge will be. That came in handy when I dove in and popped Hammon’s ultimate ability, Minefield.

The mines are destructible, but they require a good amount of damage to take down. You can even plant them in the air — I watched one dude fling himself up and pop his mines, which remained suspended in the sky.

Sounds neat! Got any tips for me?

Git gud with the Grappling Claw. I can already tell this is what’s going to set a great Hammond player apart from the masses. The rope is fairly long, but in practice, it feels shorter than it looks. It’s easy to overshoot your swing and smash into a wall instead of an enemy. You also have to be smart about where you’re engaging your enemies, because if you’re caught on open ground, you’re screwed. No wall, no Grappling Claw.

And be creative about where you hook. I used it build up momentum on the sky bridge in Gibraltar before slamming down. In that same game, I latched onto the payload and zipped around it in circles, booping enemies off as I kept pushing the load forward.

Twitch streamer Ster used it to loop around the elephant statue in Nepal and ambush some enemy pushers.

Crazyjur used the hook for enviro kills and nearly soloed a capture point on Seagull’s stream. 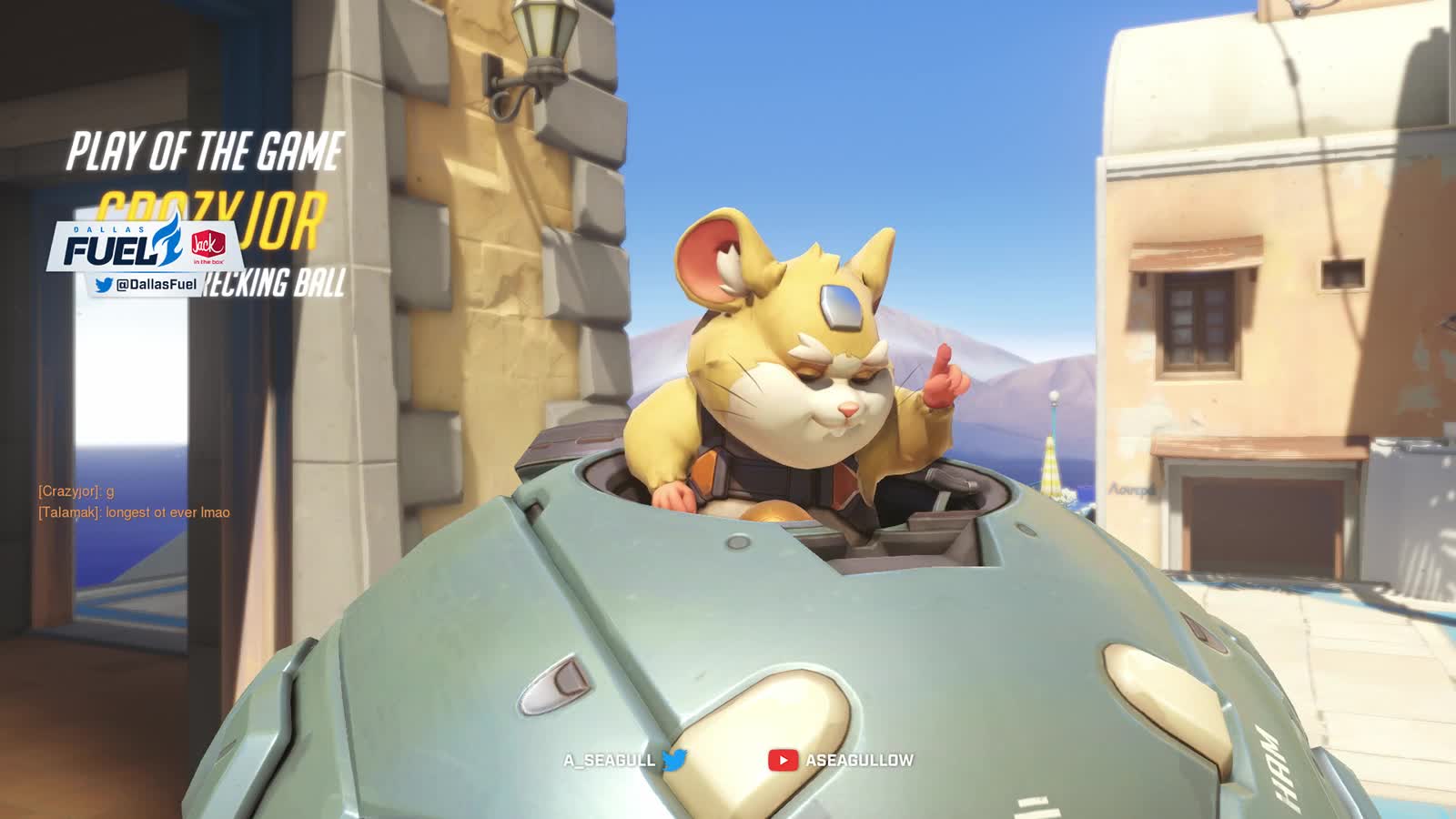 Whoa! So does that mean Hammond is going to shake up the meta?

Barring any nerfs, Hammond already looks like one of the best dive tanks in the game. If his Minefield ultimate goes unchanged, he’s guaranteed to be the top pick to control maps. His kit makes him incredibly powerful at both area denial and initiating.

But like most other tanks, Hammond is a big target. His Roll ability is also designed for knockback, not killing. Even at top speed, Hammond’s ball form only hits for 50 damage. In order to dish out real punishment, Hammond has to transform his mech into quadruped form to use his guns, but shooting makes Hammond very slow and vulnerable to headshots.

If Hammond has a counter, it would be mid-range shooters like McCree or Soldier: 76. With a few well placed shots and a stun, McCree can make short work of the hamster when he’s in walking mode. Soldier: 76’s Biotic Field allows him to stand toe-to-toe with Hammond’s Quadcannons, and if Hammond decides to roll away, Soldier: 76 could catch up with Sprint.

Wrecking Ball is the most entertaining hero in Overwatch right now

I’ve been playing Overwatch since the beta days. I remember when McCree was able to delete a Reinhardt within seconds when his Fan the Hammer ability used to be insane. In the first season of competitive mode, I got matched up with players who have since gone on to become professionals.

Hammond is the most fun I’ve had with a hero in this game, ever. He’s even a little shit talker. After I wiped out four enemy heroes with a Piledriver and Minefield, I could’ve sworn I heard the mech say, “GET REKT”.

Blizzard has done an admirable job featuring a diverse, global cast of heroes in Overwatch, but mechanically, the hero kits have been very safe. Most of them are inspired from tried and true mechanics from classic games — the railgun, the rocket launcher, the shield.

Wrecking Ball is a refreshing departure from that stodgy philosophy, and I can’t wait to see how he’ll be shaking up the meta once he goes live.

More like this
Gaming
Jan. 25, 2023
Everything you need to know about Forza Motorsport
By Joseph Yaden
Gaming
Jan. 23, 2023
Forspoken's fantastic gameplay gets buried under a weak story
By Hayes Madsen
Gaming
6 hours ago
Star Wars Jedi: Survivor looks more powerful than you can possibly imagine
By Joseph Yaden, Mike Bloom and Willa Rowe
LEARN SOMETHING NEW EVERY DAY.
Related Tags
Share: