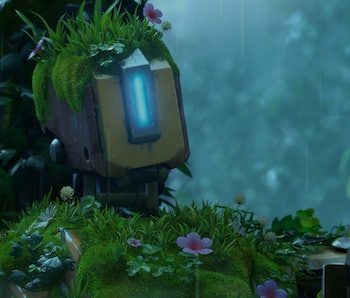 In Blizzard’s latest short film, The Last Bastion, a sentient combat robot spends its life bumbling through the world and leaving a swath of destruction behind it – when all it really wants to do is explore.

The robot is Bastion, one of the characters in Blizzard’s wildly-popular online game Overwatch. Before the game’s release, Blizzard released a series of short films that filled us with emotion and built up the lore surrounding the game’s world. The game is now out, but Blizzard is still building the lore, and today fans got a closer look at the beleaguered combat ‘bot’s daily life in a short film released during Gamescom.

The film follows the origin story of Bastion after the Omnic Crisis — a conflict in which the robotic population of the world violently rebelled against their human creators. The war lasted nearly 30 years, until the international taskforce Overwatch destroyed the omnic command and control protocols, rendering its forces inert. After its victory, Overwatch rounded up and destroyed nearly every Bastion combat unit — except for a select few.

Throughout the short, Blizzard gives us a look into struggles Bastion faces on a daily basis. Due to the nature of its previous combat programming, Bastion often loses control when it senses danger, resulting in the destruction of the world around it which it simply wants to explore. Now, it often wanders through the uncharted areas of the world to avoid humanity because of the horrors it symbolizes from the Omnic Crisis.

Blizzard says the short is the first in a new series of animated films coming this fall, which means we’ll be seeing more of its Pixar-like masterpieces as the year goes on. This short also included a brief segment in memory of Yvain Gnabro, a talented animator who worked for Blizzard Entertainment and Blur studios on projects just like this before he passed away.