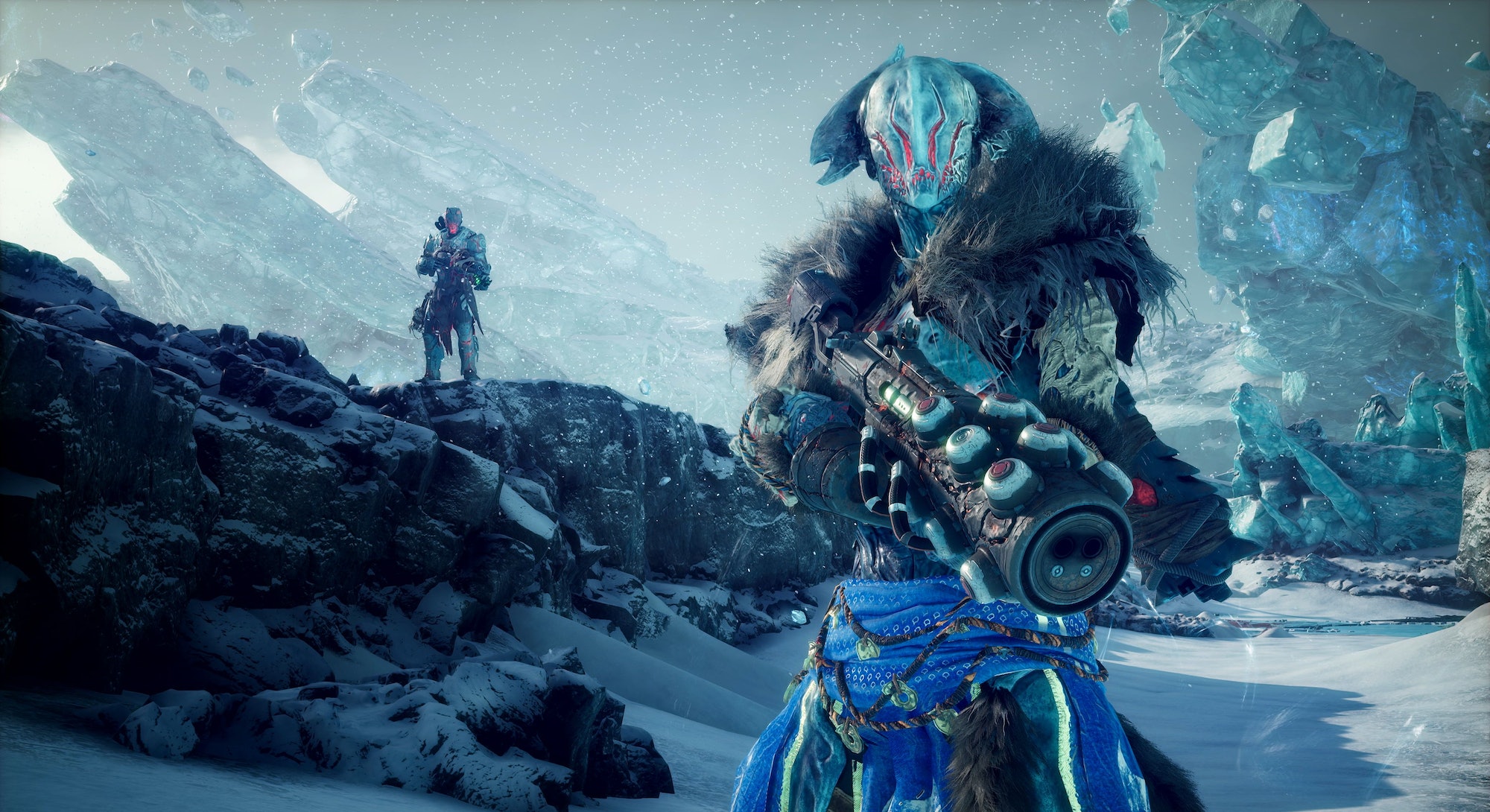 After first teasing Outriders Worldslayer in November 2021, developer People Can Fly has finally given us a closer look at the upcoming expansion. Better yet is that we were able to go hands-on with Worldslayer, ahead of its summer 2022 release. While Worldslayer likely won’t revolutionize the looter shooter genre, it aims to be a worthy follow-up to the fantastic Outriders campaign, offering a beautiful snowy environment to explore, powerful new loot, and a fresh progression system that offers lots of customization.

Outriders Worldslayer is a brand new expansion that takes place directly after the events of the main campaign. In it, you and up to two other players must travel to the far reaches of Enoch to battle a new threat known as Ereshkigal, a dark overlord, and the main villain of the expansion.

Worldslayer features new story elements in addition to lots of fresh loot, new Class Skill trees, Pax Trees, and new stages. Part of the campaign takes place in Glacier’s Edge, a snowy area that looks absolutely stunning, full of blizzards and deadly creatures to defeat. This area is considerably different from what you’d find in the main game, at least from a visual perspective, which is reason enough to dive in. Worldslayer also incorporates other regions, like the swampy Driftwater.

Worldslayer’s new progression system, Ascension, features over 200 upgrade points used across Brutality, Endurance, Prowess, or Anomaly abilities. This gives much more room for customization and plenty to work towards.

Another important addition is the new Apocalypse Tier system, which replaces Challenge Tiers, serving as a revamped difficulty scale that directly impacts how you level up. The higher the Apocalypse Tier, the tougher the enemies will be, but the rewards will be even better. Apocalypse Tiers go up to level 40, allowing you to utilize Max Gear level 75 items.

Creature design is a highlight of the expansion, introducing massive enemies that are as challenging as they are intimdating. Right at the start, you face off against a powerful Snow Behemoth—a white-haired beast that causes damage by charging into you—in the middle of a blizzard, setting the tone for the expansion at large. It’s an absolutely badass battle that immediately grabbed my attention.

The familiar linear design of Outriders remains in the Worldslayer expansion, but that isn’t a bad thing. Its linearity is part of what makes it so approachable, removing the need to spend hours on end exploring. This means you can get right to the action to grind for XP and gear.

The expansion constantly rewards you with new gear, Ascension Points, and Pax Points, offering a steady sense of progression. Pretty much every 10 minutes, you’ll have something new to experiment with, whether it’s an ability, piece of gear, or one of the new Pax upgrades.

Pax Points can be spent on a secondary skilltree, with new subclasses, offering lots of customization. For instance, there are some notable abilities such as Triggerman, which increases damage by 10% for each skill you have on cooldown, or Cheapshot, de-buffing enemies’ armor and resistance by 30% for four seconds. Individually, these skills might not seem too impactful, but as you start stacking them with other skills, you’ll find plenty of ways to develop exactly the Outrider you want.

And you’ll want to be smart with the skills you equip, not just for yourself, but in relation to your squads’, as well. That’s because enemies in Worldslayer are quite challenging, even on lower Apocalypse Tiers.

Towards the end of the preview, we were tasked with defeating a powerful boss named Fisherman, whose yellow rainjacket somehow makes him creepier than any foe that came before him. On top of that, it took extreme coordination with the team to bring him down, as the boss was not only an absolute tank, but was surprisingly nimble, leaving us on the brink of death on more than one occasion.

However, working together as a team was one of the preview’s highlights—rewarding everyone for utilizing their skills, buffs, and abilities to slowly chip away at Fisherman’s health. Even though the boss was tricky, our squad got into a rhythm of implementing well-timed abilities in such a way that placed us at an advantage. Every time my ability was on a cooldown, a teammate would unleash theirs, meaning there was never a moment of reprieve for Fisherman. We’re excited about all the different possible combinations of attacks that await throughout the rest of the Worldslayer campaign.

Worldslayer probably won’t revolutionize the looter shooter genre, instead offering much more of what made vanilla Outriders so much fun. Varied creature design, plenty of ways to build your characters thanks to the new Pax Trees, and a substantial amount of loot make this an exciting expansion, even if it plays it a bit safe.