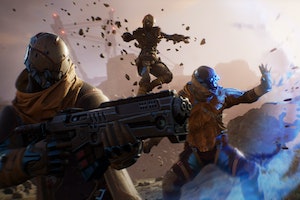 Outriders is a hit. The sci-fi shooter had a rocky opening weekend thanks to server issues, but that didn’t deter fans. Once online issues cleared up on Sunday, the game reached 125,000 concurrent players on Steam. Considering how much launch issues have killed games like Cyberpunk 2077, Outriders seems to have made it out of that tricky patch relatively unscathed.

The server headache has led to a bit of discourse about the game’s use of an “always online” model. That’s usually reserved for live service games like Destiny 2 where players are never truly alone. By comparison, Outriders can be played entirely solo. The fact that it can’t be played at all when servers are down is a bit of a head-scratcher.

While the game falls into that modern pitfall, it skirts around several others. In fact, it fixes some of the worst things about online games … both on purpose and by accident.

First, there’s the intentional side: Outriders is not a live service game, period.

The third-person shooter tells a focused story that isn’t going to get an influx of content every week. What you see in the current game is what you get until it receives a traditional DLC update. It may look like Destiny 2 thanks to the loot system and space powers, but it’s a complete package on day one that probably won’t evolve much over time. And it definitely won’t have a daily and weekly grind cycle.

That’s entirely refreshing in an era where every studio wants to hook players for as long as possible. With no battle pass, seasons, or weekly challenges to speak of, the reason to keep playing Outriders is that ... it’s fun. It delivers strong shooting and lots of missions without leaning on the promise of good content down the line. It’s an online experience that isn’t trying to make players commit to another ongoing game. The game is all already here. And it’s pretty good.

That’s been a real challenge for online games like Anthem or Marvel’s Avengers. Both feature perfectly fun gameplay, but lifeless endgames. Fans went in expecting an experience that would keep them enthralled for a long time but were ultimately let down when the games did not deliver on those lofty promises.

Outriders instead focuses on the upfront quality of the content, not what’s coming down the line. The result is a game that features exciting action that is enjoyable right away, not gameplay that seems like it’ll get better over time.

Why is Outriders always online?

With that philosophy in place, it’s a little odd that it still opts for a restrictive “always online” model at all. It seems to go against what makes the game so appealing for players who are disillusioned with live service trends.

Ironically, one of the best things about the game is a bit of an accident that bypasses its frustrating online model. Since the game is always online, players can’t pause the game. That makes sense in a game like Destiny 2 where there’s always other players kicking around. It’s totally unnecessary in a single-player game where you’ll never bump into another human.

PC players who have an Nvidia GPU can get around that in a clever way. Outriders supports Nvidia’s Ansel feature, which is a tool built for screenshot capturing. It allows players to pause a game and pivot the camera around to get a shot. For PC gamers playing solo, it becomes an accidental pause button in a game that doesn’t have one.

Having the ability to pause a game may sound minor, but it highlights another small annoyance in modern online games. You can’t get up and go to the bathroom unless you’re prepared to leave an instance altogether. The fact that there’s a way to do it at all in Outriders is a welcome tweak that we pray becomes a full feature eventually.

Outriders successfully resists some frustrating online eccentricities, but it could still go further. By divorcing its single-player content from its always-online mode, the game could truly be free of the modern design annoyances that plague some of today’s biggest games. Even so, it’s already a strong foundation that should hopefully convince studios that constantly dangling a carrot in front of players isn’t an alternative to just making a strong suite of content that’s immediately enjoyable.