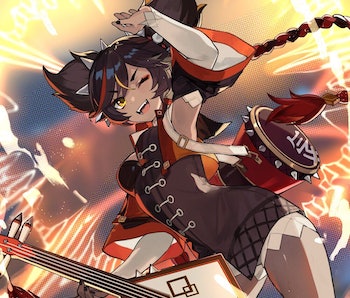 Being Genshin Impact’s Pyro performer Xinyan must be tough. Even though she was one of the first four-star characters added to to the game, it wasn't until version 2.1's Moonchase Festival in October 2021 that she was finally introduced to the story. The Labyrinth Warriors event is the first opportunity we've had to quest with her, delving into Shiki-Taishou's domain alongside Childe, so it feels right that Liyue's rock queen is finally getting some time in the spotlight.

Though she's not generally considered one of the best Genshin Impact characters, Xinyan’s physical damage-boosting shield means that she has a lot more utility than just another plain old Pyro DPS. She also feels like a character who's thematically strong with a fun design. Her whole aesthetic and backstory are based around the weirdness of being a rock musician in the fantasy world of Teyvat.

Here’s an official character demo of Xinyan in Genshin Impact.

Though Xinyan is always available through the Wanderlust Invocation banner, you can currently grab her for free in the Labyrinth Warriors event by completing the “Path of Taishou” quest and earning 4,000 Aged Tokens.

What better time to read up on the best Genshin Impact Xinyan build, eh?

If you decide to run Xinyan as support, The Unforged is an excellent claymore due to its shield strength boost of 20 percent. Four pieces of Emblem of Severed Fate offer energy recharge as well as a boost to burst damage based on 25 percent of overall energy recharge. However, if you're looking to run Xinyan as a Physical damage dealer, look no further than the build below:

For starters, Song of Broken Pines is a strong five-star claymore for Physical damage — unsurprising when you consider it's Eula's weapon. It boosts physical damage by 4.5 percent and attack by 16 percent. When you land a normal or charged attack, you gain a Sigil of Whispers. Upon reaching four, you obtain the Millennial Movement: Banner-Hymn effect for 12 seconds. This boosts attack by a further 20 percent as well as normal attack speed by 12 percent.

It has been a long time since Broken Pines was available on a weapon banner, though. A better alternative might be one of Genshin's original five-star claymores, Skyward Pride. This boosts energy recharge, so Xinyan can use her physical burst more often, and it increases all damage by 8 percent. When you land a normal or charged attack, or a burst, it creates a vacuum blade that deals 80 percent of the attack as damage. This claymore is often featured on the weapon banner, too.

For artifacts, you're going to want two pieces of Pale Flame for that 25 percent Physical damage boost and two pieces of Bloodstained Chivalry for a further 25 percent. If you don't have one of those, you could always use an energy recharge boosting two-piece like Emblem of Severed Fate, Scholar, or The Exile, to increase the frequency of Xinyan's burst, instead.

So what do you do if you don't have that five-star weapon? This free-to-play Xinyan build shouldn't cost you anything, and it will still get some great results on the battlefield:

Xinyan's elemental skill has quite a long cooldown, meaning you can only summon shields so often, and if you're a no-spend player, it's unlikely you have Xinyan's second constellation unlocked, which creates a shield whenever she uses her burst. With this in mind, the Sacrificial Greatsword is a decent pick for a C0 Xinyan, since whenever you use an elemental skill, there's a 40 percent chance the cooldown will be reset. You will have to wish for this one, but it's featured on the weapon banner pretty often.

If you don't want to wish at all, you can forge Prototype Archaic, which costs 50 White Iron, 50 Crystal Chunks, and a Northlander Claymore Billet that you can purchase from the Liyue Harbor jewelry shop for 225 Geo sigils, or earn from beating a weekly boss. This weapon offers an attack boost of 6 percent and when you land a normal or charged attack, you have a 50 percent chance to deal 240 percent attack damage to opponents in an AoE.

This can be further bolstered by a two-piece of Martial Artist, which boosts normal and charged attack damage by 15 percent, and a two-piece of Gladiator's Finale, which adds another 18 percent attack on top of that.

Whichever path you take, Xinyan is worth consideration in your roster — if only because she remains one of the game’s most unique fighters.