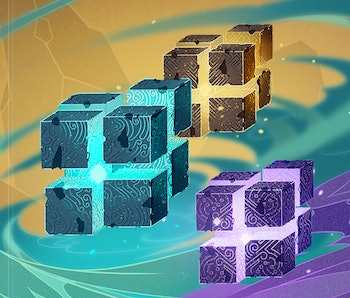 Something is always happening in Genshin Impact. In the game's latest event, Hypostases from around Teyvat have been souped up and transformed into "Pure" Hypostases, making them far greater threats than before. Scaling with the increase in difficulty, the conflicts offer a chance for players to earn a large sum of rewards. In turn, that makes it even easier to obtain a new character like Ganyu.

Here's everything you need to know about the Hypostatic Symphony event.

When are the Genshin Impact Hypostatic Symphony start and end times?

When do new bosses get added to Hypostatic Symphony?

Throughout the event, new challenges will be added each day for the first seven days. Each update will introduce a new foe for you to face either alone or in co-op mode.

What characters have increased damage for Hypostatic Symphony?

If you're facing off against the Pure Anemo Hypostasis Fischl, Xingqiu, Keqing, and Albedo will gain a damage bonus.

When fighting the Pure Geo Hypostasis Klee, Razor, Noelle, and Bennett have their attack booster.

If you choose to challenge all three at once Ganyu, Sucrose, Diluc, and Chongyun will be buffed.

These are the best characters to use in each challenge, make sure to include at least one in your party.

What are the Hypostatic Symphony event rewards?

From completing the Hypostatic Symphony event, you can earn 60 Primogems for finishing each challenge, totaling 420 Primogems.

In addition to the Primogem rewards, you can earn additional rewards based on a point total reached throughout the event.

How do you earn better Hypostatic Symphony rewards?

To earn better rewards during the Hypostatic Symphony event, you need to pass certain point thresholds in each battle. This will cap out at 2000 points total. Only your highest score will count towards the total.

Various factors will adjust what score you receive upon completion. Boss difficulty is the first modifier. There are four challenge difficulty settings: Easy, Normal, Hard, and Expert. The difficulty acts as a multiplier for your total score. If you set the difficulty to "Easy" the multiplier will only be 1x. Higher difficulty score multipliers are currently unknown.

The second modifier affecting your score is Variation, which are more specific restrictions that you can add to the fight such as a time limit or giving the boss a stat buff. The more difficult the restriction, the more points you stand to gain if you win. For example, one Variation increases the Pure Hypostasis' health. If you set their health to be bolstered by 50 percent, you'll net 150 points when you win. Conversely, if you boost their health by 100 percent, that'll net you 200 points upon winning.

You can choose multiple Variations in each battle. Make sure to load at least a few if you'd like to earn every available reward in the event, including an exclusive name card.