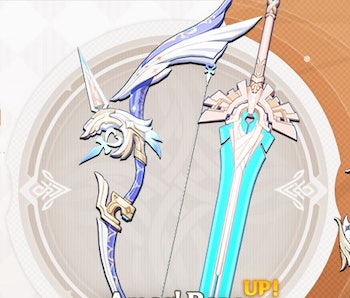 Genshin Impact characters need the right weapons. Proper equipment can make or break your build, and luckily, there are always new armaments available. As additional characters such as Ganyu crop up, so do new event weapons banners. Presumably fresh off his legendary cookie run, the new weapon banner features Amos' Bow. It's designed to pair incredibly well with Ganyu.

Even if you don't have Ganyu, could Amos' Bow be worth spending your hard-earned Primogems on?

Here's everything we know about the banner.

When are the Genshin Impact Amos' Bow banner start time and end time?

The Amos' Bow banner began on January 12 and will conclude on February 2 at 3 p.m. eastern.

What weapons are featured on the Genshin Impact Amos' Bow banner?

These weapons are also available on the standard banner but receive an increased drop rate for the duration of the event.

Are you guaranteed to get Amos' Bow in Genshin Impact?

You're not guaranteed to obtain Amos' Bow if you pull from the banner. Luckily, Genshin Impact does feature a pity system, which guarantees you'll get a five-star item after a set number of wishes. On the weapon banner, five-star pity kicks in on the 80th pull. (This is slightly earlier than the character event banners, where pity will be granted on the 90th pull.)

If you participated in a previous weapon banner without earning a five-star weapon, your progress will carry over to the Amos' Bow banner.

Is Amos' Bow a good weapon in Genshin Impact?

It's a great weapon, but the right characters to draw out its potential have yet to be added to Genshin Impact. Most five-star bow characters like Venti and Tartaglia aren't suited for the damage-centric gameplay required for Amos' Bow.

Ganyu and Fischl come the closest as they can both be turned into fairly usable DPSes. If you have yet to obtain either of those characters or haven't upgraded Fischl further than constellation one, you shouldn't even consider Amos' Bow in terms of good or bad. It's just not a weapon that will be useful for your party's build.

Should you pay for the Amos' Bow banner in Genshin Impact?

Other than Amos' Bow, the banner actually holds a fairly desirable four-star weapon, the Sacrificial Sword. It's one of the best weapons available for Xingqiu in Genshin Impact. With it being a rate-up weapon in this banner, you'll seldom get a better chance to refine the weapon.

If you have a Xingqiu that you'd like to transform into a more essential team member, then this banner is one that you should attempt. Alternatively, Xingqiu would also perform well if you equip him with the Festering Desire weapon from the previous event.

What banner comes after Amos' Bow in Genshin Impact?

We don't know what banner will follow Amos' Bow in Genshin Impact. We do know that the next two characters to arrive will be Xiao and Hu Tao. Given miHoYo's regular practice to pair character and weapon banners, we can assume both characters will debut with Polearm-centric banners.

Xiao will likely have a banner featuring the Primordial Jade Winged-Spear, which he's regularly wielded in his official art pieces. Hu Tao will almost certainly be paired with a banner for the currently unreleased Staff of Homa. The weapon matches her known skillset and color scheme, making it a perfect partner.

Now read: Wishes, banners, pity, and everything to know about Genshin Impact gacha

More like this
Gaming
4 hours ago
Everything we know about Natlan, Genshin Impact’s Pyro region
By Jess Reyes
Gaming
8.4.2022 7:11 PM
10 new games to grab ASAP from the PlayStation Summer Sale 2022
By Robin Bea
Gaming
8.1.2022 5:37 PM
Backbone for PS5 is a solid mobile controller with odd flaws
By Joseph Yaden
Related Tags
Share: