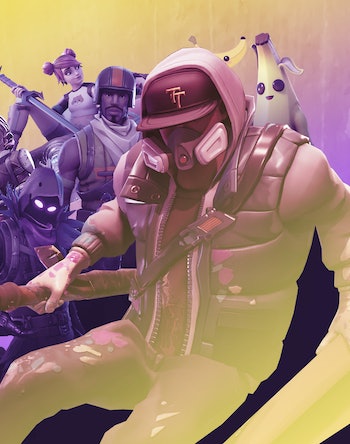 In 2017, developer Epic Games took the industry by storm.

Fortnite, is a free-to-play, colorful third-person shooter with building mechanics that made it entirely unique. The developer at the time was best known for their work on Gears of Wâr and the Unreal Engine—far from the bouncy building world. But little did we know Fortnite would eventually become one of the biggest games in the world, reaching over 350 million players as of May 2020. Even beyond its impressive player count, Fortnite has become incredibly influential, fundamentally changing how live-service games are monetized while popularizing the battle royale genre across the board.

While live service games were certainly plentiful in 2017, they often utilized outdated monetization tactics, which required players to buy a base game, any additional DLC, and even extra microtransactions in order to experience everything possible. Players were fed up, as companies were squeezing every last dime out of them, leaving a sour taste when trying to enjoy certain multiplayer experiences.

Then, Fortnite came along, giving players a robust multiplayer offering without forcing anyone to spend money, instead, featuring optional cosmetics that did not impact gameplay whatsoever. To drive revenue, Epic Games added a Battle Pass, which is updated seasonally, typically costing around $10 or so, giving players access to limited-time cosmetics and in-game currency. As players earn XP from matches, they level up the Battle Pass, offering a rewarding sense of progression.

Although the idea of a Battle Pass wasn’t created by Epic Games, Fortnite certainly popularized it. The idea caught on, leading to many other developers borrowing the idea for games such as Apex Legends, Call of Duty: Warzone, and Destiny 2 — all of which are free-to-play, just like Fortnite.

It’s clear this monetization strategy has been lucrative for Epic Games, leading to over $9 billion in revenue from 2018 to 2019 alone.

Fortnite’s cosmetics themselves have drawn a crowd, giving players a slew of licensed characters from beloved franchises. The game has featured dozens of recognizable heroes and villains like Spider-Man, Batman, Darth Vader, Lara Croft, Master Chief, and Kratos. At this point, Fortnite has probably included a character you like, whether it be from Star Wars, Marvel, DC, or The Walking Dead.

This gives the game wide appeal, enticing players to spend money. Since Fortnite is free, it’s easy to justify spending $10 or $20 on your favorite character skins, which typically come with other cosmetics like emotes, loading screen art, and gliders. These characters are almost always available for a limited time, further incentivizing players to buy them right away.

Fortnite’s success with licensed characters has caused other games to borrow the idea. Warzone is a great example, featuring Operator skins such as Billy the Puppet from Saw, Judge Dredd, and John Rambo. The game will soon get the T-800 from Terminator 2: Judgment Day.

What good is a live-service game if you aren’t driven to keep coming back? Fortnite has absolutely perfected this strategy, constantly adding or changing things that reward players for checking in. It’s not enough to have an ever-expanding list of challenges, a compelling Battle Pass, and fantastic third-person shooting — with so much competition, players need more.

Epic Games constantly changes things up in Fortnite, whether it's offering brand-new characters in the store, or even fundamentally changing how the game is played — just like it did when it added its Zero Build mode, disabling building for a limited time.

This was risky, but ended up being a gamechanger, as it became more appealing to a wider group of players. Not many games could get away with throwing out their most iconic feature, but Fortnite pulled it off. Thankfully, there are two sets of playlists: Zero Build and traditional Battle Royale, allowing you to play how you want.

Fortnite is also famous for its limited-time events, such as the Travis Scott concert (drawing over 12 million concurrent players) and the Galactus battle (over 15 million concurrents). These events are typically only available for a day or two — sometimes only a few hours — and usually include a massive setpiece that plays with scale. Sometimes the modes are cinematic, while others are focused on gameplay. Epic has a knack for providing compelling events that players don’t want to skip, keeping the game fresh at all times.

In many ways, Fortnite is an amalgamation of several games such as PlayerUnknown’s Battlegrounds, Terraria, Minecraft, Call of Duty, Among Us, and others. Even though many of Fortnite’s mechanics aren’t original ideas, Epic Games deserves credit for building upon these features, forming a shooter that feels like a hodgepodge of your favorite games.

As Pablo Picasso once said, “good artists borrow, great artists steal,” and Fortnite is a perfect example of that.