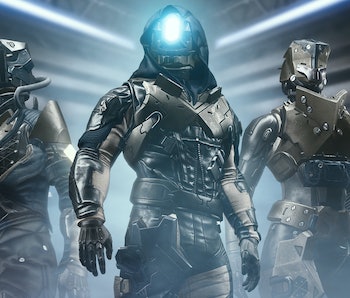 This article about cross save in Destiny 2 was originally published on November 11, 2020 and updated on April 4, 2022 after crossplay was enabled. Read on for the original article, with some new changes to reflect the latest updates on this topic.

Destiny 2, Bungie's massively multiplayer online first-person shooter, entered its third full year of programming during the same week that Microsoft and Sony's next-gen video game consoles launched. For any gamers out there considering picking up the sci-fi game on either the PlayStation 5 or the Xbox Series X/S, you should know that any migration across the aisle between the Sony and Microsoft ecosystems isn't simple. But it is possible.

Playing PS4 characters on PS5 is as simple as logging into your PSN account. Destiny 2: Beyond Light being free as part of Xbox Game Pass is a deal too good to pass up for any gamers (like me) who may have started their journey on the PlayStation 4 and want to switch over.

Full-on crossplay in Destiny 2 could arrive sometime soon. But for now, the only option is to enable Bungie's Cross Save feature that allows you to merge accounts between Xbox, PlayStation, Steam, and Stadia. Here's how to make it happen.

What happens when you enable Cross Save?

By the time next-gen launch week is over, Destiny 2 will be playable on all current-gen and next-gen Xbox and PlayStation Consoles, along with PC via Steam and Google Stadia. Cross Save essentially makes it so that one set of up to three characters from your original platform becomes playable across all of these platforms.

If you have other characters, they won't be erased outright, but you won't be able to play them until you disable the feature. And there's a limit to how often you can toggle this feature on or off.

With the launch of Destiny 2: New Light in October 2019, the base game went free-to-play, which makes for an enticing reason to explore different platforms with Cross Save. And with Destiny 2 and all its expansion — including Beyond Light — included as part of Xbox Game Pass, there's really no reason not to play Destiny 2 on an Xbox Series X or S if you also have Game Pass.

All things considered, this process is actually very straightforward.

You first need to navigate to the official page, where there's plenty of information about the feature and select the bright yellow "GET STARTED" button.

Authenticating your accounts is just a fancy way to say that you need to log into whatever accounts you want to sync for the purposes of Cross Save. All of these accounts are technically free, so you might as well register for everything and sync it here, even if you don't have the hardware to actually use the accounts.

The next major step has you select only one set of characters as your primary. You can create up to three characters on each platform, but you have to choose just one trio and sacrifice all others. So you can't mix and match by teaming your PS4 Hunter up with your Xbox One Warlock.

You can always disable Cross Play to revisit any characters you put in cold storage, but it's best to permanently commit to one full set right here and right now.

Step 4: Review and finalize Cross Save

The final review step will summarize which batch of characters and Clan you'll use for the merger, but it'll also recap what Seasons and "Entitlements" you own on each platform. If you're an Xbox Game Pass member, you'll have to claim the base game and entitlements within that section of your console before they'll appear here.

But don't worry: All any of this means is that you'll have to own the game, season pass(es), and entitlements on a platform before you can use your characters. In all cases, you can download the New Light version of the game and play that for free.

There you go, Guardians. That's how you carry over your character(s) and progress across different platforms — and generations.

Destiny 2: Beyond Light is available on PS4, PS5, Xbox One, Xbox Series X/S, PC, and Stadia.

More like this
Gaming
7 hours ago
Where to find Fecund Blessings in Genshin Impact for Of Ballad and Brews
By Jess Reyes
Gaming
Oct. 3, 2022
How to find fresh designs to upgrade and decorate your Splatoon 3 locker
By Hayes Madsen
Gaming
Sep. 30, 2022
The best Warzone EM2 loadout for Vanguard Season 5 Reloaded
By Joseph Yaden

This article was originally published on November 11, 2020