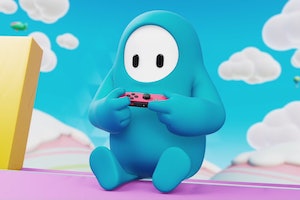 Epic Games buys 'Fall Guys': Crossplay and 3 other things it could mean

Epic Games just brought another battle royale under its wing. Fortnite is still one of the most popular games in its world, and its developer has been on a buying spree over the past year. The latest acquisition was Tonic Games Group, parent company to Fall Guys: Ultimate Knockout developer Mediatonic.

Now that this acquisition is confirmed by both Tonic Games Group and Epic Games, fans want to know what it means for the future of Fall Guys.

4. Fall Guys is here to stay

Now that Mediatonic has the backing of Epic Games, don't expect them to slow down their support for Fall Guys anytime soon. While this battle royale was overshadowed by the growing popularity of Among Us towards the end of 2020, it still has tons of players who want to see more levels and features come to the game.

"Your gameplay isn’t changing and neither is our mission to bring Fall Guys to as many players as possible," a blog post from Mediatonic about the acquisition promises. "Each season, we’ll continue to expand the game with new content, features, rounds, and costumes." With Season 4 of Fall Guys already teased, it's clear that this battle royale isn't going anywhere.

This acquisition also guarantees that Fall Guys will reach as many platforms as possible. In February, ports for Nintendo Switch, Xbox One, and Xbox Series X were announced. This new acquisition announcement reiterated that the game is still coming to those platforms.

The extra support from Epic Games should mean that the game will hit its promised Summer release window on those platforms, and players don't need to worry about the ports not having parity with the PC and PS4 versions. While they have not been confirmed, Epic Games Store and PS5 release now also seem much more likely.

Mediatonic promises that Fall Guys will remain on Steam, unlike the Rocket League, which is also owned by Epic Games now and only available to play on PC via the Epic Games launcher. If we're lucky, this also means we'll see it on mobile in North America in the future, even if Epic currently has a large dispute with Apple.

2. Fall Guys will get more crossovers

While the blog post doesn't directly mention this, the fact that Fall Guys has Epic's backing is promising considering how frequently the game crossover over with other franchises. We've seen Fall Guys collaborate with everything from Sonic the Hedgehog to Godzilla. Meanwhile, the latest season of Fortnite has just been one giant crossover with The Mandalorian, Ryu from Street Fighter, the Predator, and more making an appearance.

These are two companies that love their battle royale crossovers. As such, we don't see Mediatonic backing away from them now that they having Epic Games' money behind them. If we're lucky, we can hopefully see Fortnite and Fall Guys cross over themselves in some way.

1. Fall Guys will finally get crossplay

Since Fall Guys was first released in August 2020, fans have begged for crossplay support and the developers have promised that they are looking into it. There hasn't been much progress on that front until now though. In Mediatonic's blog post, the developer mentions that "Fortnite and Rocket League already have tons of features we’d love to bring to Fall Guys."

Crossplay, account systems, and squad vs. squad modes are specifically called out. As such, it's safe to assume that we will get all of these features in Fall Guys at some point in the future. As the game is about to be available on every major platform, this will certainly make the experience more seamless and user-friendly.

While Rocket League and Fortnite are free to play, Mediatonic says Fall Guys will stay at its $19.99 price point for the foreseeable future. Still, it's clear that this acquisition is very beneficial for Fall Guys right now, so fans hopefully don't have too much to worry about.

Fall Guys is available now for PC and PS4.