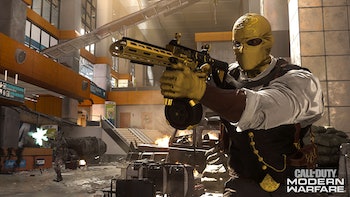 After August 14's Call of Duty: Warzone update, a new overpowered weapon has emerged in the new meta: With a certain attachment, the FR 5.56 assault rifle, aka the FEMAS, can become a one-shot kill machine. Developer Infinity Ward already has plans in place to patch this god-tier weapon and attachment combination out very soon, so you'll want to play around with it ASAP before it is erased entirely.

Which gun is overpowered? The FR 5.56 assault rifle can become extremely deadly in Call of Duty: Warzone, with the right attachment. In a YouTube video published August 17, YouTuber TheXclusiveAve outlined how this assault rifle has become "the most broken thing in Warzone" when it gets the 12-Gauge Deputy underbarrel.

While this attachment uses a special kind of ammo that you can only get from an ammunition box, that's not really an issue as the gun can one-shot kill most enemies if you have a decent aim. Just check out this Twitter clip from Twitch streamer HusKerrs to see just how overpowered it is:

As long as you have access to the required gun and attachment, simply pairing them together will transform one of the worst guns in Call of Duty: Warzone into one of the best. The video from TheXclusiveAce that popularized this overpowered gun on Monday shows that it can be one-shot enemies with full armor and full health from up to 15 meters away. This is the only assault rifle that this accidental buff appears to apply to as well.

In a fast-paced battle royale game like Call of Duty: Warzone, this strategy can be a lifesaver — or perhaps more accurately, a lifetaker — despite the ammo caveat and the fact that the FR 5.56 is a fantastic gun normally.

What made this gun overpowered? This weapon and underbarrel attachment combination first became viable when Season 5 of Call of Duty: Warzone began on August 5. While Infinity Ward has not said what made this amazing combo possible, TheXclusiveAce has a theory.

"With the Season 5 update, the FR 5.56 got a massive boost to its base ranges ... it appears they've made the ranges effectively infinite for the base version of the FR 5.56," they said. "What I suspect happened here is that range increase also carried over to the underbarrel shotgun on the FR 5.56, so now as long as you're hitting the number of pellets required to get a one-shot kill at point-blank range, you're still going to be able to get a one-shot kill out to a ridiculous range."

Is Infinity Ward addressing this? While this ridiculously powerful weapon could cause a lot of problems in Call of Duty: Warzone if it went unchecked, Infinity Ward confirmed that it was aware of the issue on Twitter. "We’ve identified the issue with the FR 5.56 and are currently working on a fix," the tweet reads. "We’ll share more details as they become available. Thank you all for your patience." As of Tuesday around midday Eastern time, the fix has still not been patched out — but it's only a matter of time.

The Inverse Analysis — While the FR 5.56 will probably be depowered by a hotfix over the next day or so, it's a really fun combination that you should try out before it's fixed if only to capture this ridiculous moment in Warzone history.

If you're a casual player, it will help you get more kills, and it will make more experienced players even more powerful. While overpowered weapons can be frustrating for their victims, they're also incredibly fun to use. And for the time being, it's a viable way to rack up experience in the game.

Call of Duty: Warzone is available now for PC, PS4, and Xbox One.