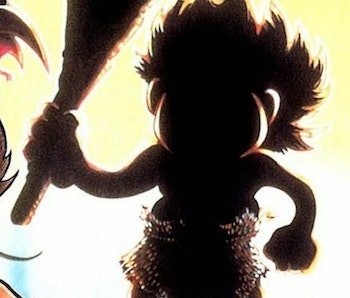 It’s a simple yet effective strategy: a cute, cartoony platformer. The cadence of traversal in each level changes moment to moment, alternately requiring patience or rapid movement. During the slower moments, it can be easy to appreciate the bright colors and funny designs, but they don’t distract during the harder challenges. Prehistorik Man is just this: a cute platformer that moves efficiently. The SNES game, released in 1996 in North America, doesn’t rewrite the rules of the genre but it offers a fun experience.

The game is actually the third in the Prehistorik series, and it’s by far the most developed. The games revolve around Sam, starting off “one night in prehistory” where “dirty deeds are afoot,” according to the game’s introductory scene. Dinosaurs are stealing food from a caveman village! Ancient humans, as well as their neanderthal ancestors, are fascinating to study. While Prehistorik Man isn’t concerned with scientific accuracy, it offers a diverse ancient society that is almost as fascinating as the real thing.

In a case of evolution, Prehistorik Man takes clear influence from 1994’s Donkey Kong Country. Surrounding Sam are a whole host of prehistoric figures, including a Village Chief who offers Sam his daughter’s hand in marriage if he can bring back enough food (Village Chief is sadly cancelled). There’s a hunter who teaches Sam action moves, an inventor who introduces a glider for flying sequences, a smith who makes new weapons. Even the daughter shows up, looking right out of the 1980s Sunset Strip.

Sam is a jolly looking himbo, always wearing a smile. He wears sunglasses on the game’s cover. His tongue sticks out when he runs. He falls asleep when the controller idles. Sam is part of the long legacy of slightly clueless protagonists who know how to jump and smash, he’s a proto-Crash Bandicoot. His special move is a screen-clearing scream. You know this guy is cool.

Facing Sam are an assortment of mostly animal enemies set across natural environments, including one where he must ride giant leaves upwards. There are spiders that move up and down (which Sam can ride), dogs, dinosaurs, birds, and others prowl the screen back and forth. To take them down, Sam has his trusty clubs as well as ammo-limited projectiles from time to time, varying from axes to spears to frogs.

His modes of transportation vary as well. Sam’s natural state is running around, but on occasion, his inventor friend offers up a new way of getting around. These were not my favorite moments in the game. Specifically, I found the navigation of the glider challenging. After taking a tongue-wagging running start and jumping, Sam needs to move the glider up and down to keep airborne. I could get air, but had trouble sustaining flight and kept missing the longer leaps. The flying mechanics didn’t feel fully formed. Pilotwings this is not.

When Prehistorik Man first came out, critics were quick to praise its originality. The game “isn't based on a movie, it doesn't star any of your favorite comic book characters, and these things alone make it more fun to play,” Game Informer wrote in 1996. And it’s true: there is something unknown about Sam and his fellow villagers that gives a certain warmth.

But Game Informer was viewing the game from 1996. From the vantage point of 2021, Prehistorik Man sits inside the SNES App alongside classic platformers like Yoshi’s Island. While Prehistorik didn’t expand the possibilities of platformers like that game did, it offers a fun diversion that’s easy to master (except for the gliding) with an original cast.

Prehistorik Man was developed by the Titus France studio, which makes it a footnote in gaming history. A year after Prehistorik Man came out, Titus signed a licensing deal with Warner Brothers for the rights to a Superman game. That game, now known as Superman 64, is widely seen as one of the worst games of all time.

While Titus will always be associated with the disaster that was Superman 64, Prehistorik Man shows there’s more to their story.