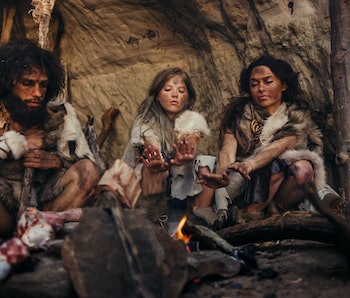 Large animals, like lions, don’t play active roles in raising their cubs. Some animals, like polar bears, are even worse, and occasionally eat their young when food is scarce. We might take the doting modern dad for granted, but if you take a look at the rest of the animal kingdom, he’s a pretty unique specimen.

Fatherhood didn’t just happen, it had to evolve and scientists are starting to get a better idea of the conditions that honed human fatherhood.

Many animals don’t exactly define fatherhood the way that humans do. Mammal fathers, specifically, don’t tend to dote on their kids, says Hillard Kaplan, an anthropologist at the University of New Mexico who studies human life history.

“The provisioning of young for an extended period is pretty unique among humans,” Kaplan tells Inverse.

Here's why — There are reasons that the dad approach may not have wide appeal. If the goal is to ensure that your genes survive into the next generation, animals typically have two options, he explains. You could spread your DNA far and wide by increasing access to females through competition.

The other strategy is to invest in the longevity of your offspring – to become a dad and guide your spawn through life.

Humans, says Kaplan, chose the latter. “We have a greater emphasis on the investment than on the mating competition,” says Kaplan.

The big question facing evolutionary biologists is: why did "the dad strategy" (as a May 2020 paper puts it) prevail? In the midst of a pandemic, the story of fatherhood feels even more poignant. A trying moment millions of years ago suddenly made becoming a devoted father a huge advantage.

The evolutionary origins of fatherhood – Previously, scientists suggested that fatherhood was primarily a sexual arrangement: dad would protect and provide for children in return for sexual fidelity.

That concept of fatherhood is waning. Chimpanzee studies have demonstrated that a meat-for-sex exchange between males and females rarely happens. That casts doubt on the idea that such exchange happened for ancient human couples.

Instead, Kaplan suggests fatherhood was forged during a trying time for ancient humans about 2 million years ago, during the Late Pliocene and Early Pleistocene periods. During that time, the African savannah began to dry out. The amount of mammals present out in the open increased, as did tubers (potatoes) and nuts, but water-dependent fruits declined.

A 2020 paper in the journal Proceedings of the National Academy of Sciences suggests that these conditions actually favored dads over "cads" – or males who simply tried to make as many babies as possible with different mates.

In the paper, the authors argue that this ecological change would have made it more advantageous for men and women to work together to glean a diversity of food sources. For example, females, who were primarily responsible for childcare could forage for carbohydrate-rich products. With an abundance of mammals (causing more “prey encounters”), males would pursue those other sources of food energy-rich food.

"That gave males the ability to make a really big difference in children’s lives..."

That created a complementarity between males and females, which would make the partnership extremely worthwhile for each parent, says Kaplan. Fathers could provide a tangible benefit that would have helped keep their children alive.

If there is more than one child, both mothers and fathers need to be contributing, to make sure all the children live, Kaplan explains — this is particularly true of human children, who have prolonged development compared to other animals.

The children of cads on the other hand, may have struggled in that new environment where combining parental forces was necessary.

“Humans adapted to an omnivorous diet in which hunting played a really important role in their economy,” says Kaplan. “That gave males the ability to make a really big difference in children’s lives by engaging in hunting as opposed to beating their heads against one another and competing for females,” Kaplan says.

Ultimately, Kaplan says that fatherhood is part of what he calls the human adaptability complex – or a series of behaviors and physiological changes (like our enlarged brains) that co-evolved as humans had to get more creative to survive, and also ensure that their offspring made it as well.

Forming a family may have provided a crucial missing piece.

What else is in it for dad? –  Investing your resources in a few children might have still been risky business for ancient dads. But sticking around and forming a family could have helped ensure future success for the dads and their progeny, which eventually enabled them to win out over the cads.

On one hand, providing excess energy in the form of food might have allowed for mothers to have a shorter interval in between births, allowing for the birth of more children (allowing the devoted dads to perpetuate their genes similarly to how the non-committal fathers might have by mating with multiple females).

But the other benefits would likely only be reaped by fathers alone. If children can focus on learning new activities as opposed to struggling to survive, they become more productive and helpful adults, Kaplan says. Then, they might have children, and dad’s genes make it into another generation.

A family is created. And a father's investment in his child continues to grow beyond just one individual as resources are shared and passed down.

“Ultimately, part of the human adaptive complex includes grandparenting,” says Kaplan. “When men and women act as grandparents, they have a flow of resources to their adult children and to their dependent grandchildren.”

In that sense, the evolution of fatherhood is inseparable from the evolution of the family. Conditions required humans to combine forces, and invest in the long term success of their children.

The course for human fatherhood was set: ancient human dads decided that the best way to survive was to watch their kids grow and prosper.

This week, we’re just grateful that it happened.

More like this
Mind and Body
7 hours ago
Does chewing gum burn calories? The answer may be hard to swallow
By Allison Parshall
Mind and Body
8.13.2022 10:00 PM
How do you get monkeypox? An epidemiologist explains what “close contact” means
By Rebecca S.B. Fischer and The Conversation
Mind and Body
8.4.2022 7:32 PM
This popular anti-aging goo can help regrow muscle — study
By Miriam Fauzia
Related Tags
Share: