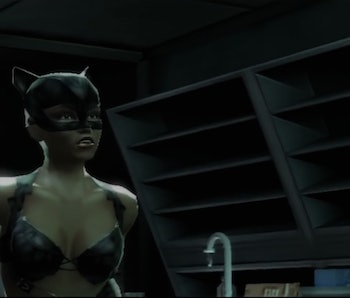 Media adaptations for comic books have a long history of mostly being garbage. Until superheroes slowly started to come of age with Christopher Nolan’s Dark Knight trilogy, the best Hollywood could hope for was that they didn’t end up polluting the box office with a Spider-Man 3 or a Fantastic Four (oh, wait).

TV has had a similar trajectory, albeit with a less successful track record, but at least Netflix’s Marvel shows are upping the ante. Games have had a bit more trouble — for every Arkham Asylum there’s at least two or three X-Men: Destinys. These nine are the cream of the crap; probably best to avoid at all costs, but why would anyone want to play them anyway?

In 2003 the sixth generation consoles were only just starting to find their footing. Survival horror design was still somewhat acceptable. Licensed games were arguably at a fever pitch. All of these factors may as well have played into the creation of Batman: Dark Tomorrow.

Rather than attempting an open world — still too new a prospect in those days — Dark Tomorrow has Batman shuffling through a number of linear environments in Gotham, using Resident Evil-style tank controls. (Creepily, he doesn’t even move his arms when he walks.) The game’s action, a term used loosely here, is stiff and dull, ending with the caped crusader kneeling down to restrain enemies ad infinitum like a beat cop in some half-cocked Lynchian nightmare. Also, again, why does a Batman game have tank controls?

Before Jason Momoa was given the perhaps unenviable task of making Aquaman a character you care about (not that Momoa has ever had problems there), DC’s ruler of Atlantis has long been a laughingstock of his comic universe. Aquaman: Battle for Atlantis did nothing for his cause. Swimming is never especially enjoyable in games, even if you’re not in danger of drowning; a whole game of zipping around murky, featureless cities whose only activity is repetitive slugfests against undersea foes isn’t a recipe for success. To say nothing of Aquaman’s distractingly luxurious hair, the game’s stylized Incredibles-by-way-of-Thunderbirds aesthetic and still-frame comic panel cutscenes that use, you guessed it, the in-game 3D models instead of art. Pass.

Watchmen: The End is Nigh

Watchmen (not Zack Snyder’s) took the concept of superheroism and inverted it, giving its multi-faceted costumed cast a number of inner demons to battle. Whether or not it succeeds in having much of a plot is perhaps a little more open to debate, but regardless, the book’s character-driven approach places it among the most fascinating comics ever written. Watchmen: The End Is Nigh, a movie tie-in game complementing Snyder’s adaptation, replaces Alan Moore’s grand, morose existentialism with mindlessly beating up thugs as Rorschach and Nite Owl as voiced by their actual actors. Deep.

Who the hell is X-O Manowar? Apparently a character who’s so unpopular that looking up videos of the ’96 beat-em-up Heavy Metal only really yields playthroughs with Iron Man. Not that you’d want to play (or even watch) this game anyway; it has that perfect combo of early, ugly polygons from the nascent days of the 32-bit era, gross, Area 51ish 2D sprite work and clunky animation. Everything about it is a chore. Still, Manowar might as well be the ball and chain locked around Tony Starks power boots, dragging him into the abyss. This would never happen in the MCU.

Picture yourself playing a new Batman game, maybe another Arkham sequel. This time the developers have opted for a really heavily vehicular gameplay style, even more so than Arkham Knight’s. You start the game in a souped up batmobile; your mission is to drive across Gotham where some supervillain’s gang has been wreaking havoc. You drive through the city and reach your destination, an old warehouse. The game throws you into a cutscene. Batman kicks ass. Then you’re driving again. Drive here, the game says. When you do, you’re thrown into another cutscene. Batman kicks ass. When do I get to kick ass? you wonder. You’re behind the wheel again. Here’s your destination, the game says. Now picture the game in PS One graphics, with loading screens popping up halfway through levels to render the rest of the city. This, amazingly, is Gotham City Racer.

Spawn, starring a wetwork agent with a heart of gold who comes back from the dead (thanks ‘90s), is pretty good fodder for a comic book game. Spawn: The Eternal, gaming’s second attempt at making good on Todd McFarlane’s elaborately caped hell-born hero, is baffingly bad. The game follows an ugly, under-rendered Spawn through the ages, jogging through a seemingly endless procession of barren, smeared levels devoid of anything to do except beat baddies up. When you do encounter an enemy, the camera switches from third-person 3D to a 2D fighting game plane, inexplicably trying to apt Street Fighter with about a fifth of the precision or response. Hilariously, Spawn also has a finite magic meter, which if totally depleted ends the game. Nothing else needs saying.

Are you a fan of 2004’s Catwoman? Do you enjoy running around on all fours, kicking lone guards into dumpsters? Do you think actually rescuing cats is a good video game activity for a superhero? Do you appreciate having to collect jewelry and a diamond encrusted health meter? Do you think this bizarre screensaver was a good use of the developer’s time and effort? Do you like cat-related puns? Are you a fan of 2004’s Catwoman (repeated for emphasis)? Congratulations, you’re a fan of the Catwoman game. Now get away from me.

What can anyone say about this game that hasn’t already been said? Lex Luthor tells Superman that in order to save his friends, he must solve his maze. You fly through rings. There’s a lot of fog to hide the horrendous pop-in. Superman 64 sucks.

You really only need to watch this intro for Acclaim’s execrable 1997 Fantastic Four PlayStation adaptation to know that it’s an abomination simply due to the funk-pornstache music here. What would possess anyone to associate this with a team of cosmic ray-empowered superheroes? But if you dare continue, it gets worse. Gameplay is run-of-the-mill brawler slog, with models that look like they’re made out of wet papier-mâché that move at about 10 FPS. The weird, warped way the characters move make the game feel like it was a low-rent Eastern European knockoff that was being made without permission until the last minute. And throughout it all, there’s bright, jazzy sax to make sure you never forget about ‘70s humping. Just awful.