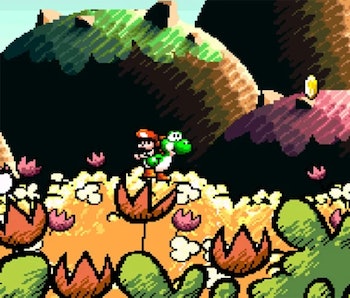 Before the God of War reboot and The Last of Us, there was Yoshi’s Island. At first, there might not be much of comparison: the first two are notable for their brutal violence, the latter is a 1995 Super Nintendo game that looks like a coloring book. But the core of all three lies a stark thematic similarity: raising a child.

The opening cinematic of Yoshi’s Island shows Baby Mario and Baby Luigi being carried by a literal stork (to their vaguely defined parents) when an attack drives him of course, and Mario ends up landing on Yoshi Island. The society of Yoshis then bands together to help reunite Baby Mario with his brother. It’s the sort of arc that could easily fit in with a gritty post-apocalyptic adventure today.

Yoshi was first developed for Super Mario World, driven by developer Shigeru Miyamoto’s desire for Mario to ride a horse. First conceived of as a giant lizard, then a turtle, and finally a dinosaur, Yoshi became a beloved member of the Mario family. More than just a ride, the character allowed developers a variety of new movements, most notably Yoshi’s Kirby-like ability to swallow enemies and spit them out.

None of the Yoshis really “die” in Yoshi’s Island. Rather, the player is forced to always keep an eye on Baby Mario. If Yoshi gets hit, Baby Mario flies away, crying, and Yoshi has a limited amount of time to retrieve him. This time becomes especially pressing while waiting for Yoshi to recover from being smashed by a door or being hit by a Piranha Plant. While there’s no time mode on a level, the sudden introduction of a timer to find Baby Mario matches the anxiety of a parent whose newborn infant has gone out of sight for even the briefest moment.

Keeping tabs on Baby Mario is a powerful dynamic that changes the game, but Yoshi’s Island doesn’t stop there. There’s also the flutter jump, which Director Takashi Tezuka thought would “help people who have difficulty with platformers.” Gaming still needed an introduction for most players at the time, and Tezuka says in the Nintendo retrospective that trying to “think of new actions that would allow newcomers to enjoy playing” was a major focus of Yoshi’s Island.

The game’s “scribbled crayon” art-style, which Hino describes as a rebellion against the computer-generated style of Donkey Kong Country, could be enough to draw new players in. But there’s enough challenges here for even the most experienced gamer to dig in deep. Expanding on Yoshi’s swallowing, the game allows the swallowed to be turned into eggs that follow Yoshi around, which he can then aim and shoot. For all intents and purposes, Yoshi turns into a gun.

The hand-drawn feeling of the game’s style also has kept it from aging as much as a game from 1995 should have at this point. Pushing the limits of a system that would soon be retired for the Nintendo 64’s 3D-world, Yoshi’s Island Super FX2 card allowed for scaling sprites, meaning that enemies could leap from the game’s backgrounds to the foreground, which make for some shocks in gameplay.

If there’s any single drawback to Yoshi’s Island, it might be getting overwhelmed by the variety of tactics and mechanics available. Learning how to master the flutter jump, shooting eggs, and rescuing Baby Mario all at once can be a dizzying experience. Yoshi’s Island keeps the player on their toes, making any struggle well worth the effort.