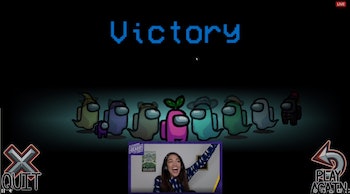 On Tuesday night, U.S congresswomen Alexandria Ocasio-Cortez and Ilhan Omar played Innersloth’s popular multiplayer game Among Us with several prominent Twitch personalities over a livestream. The BBC reports that the session peaked at around 400,000 viewers, the third-highest ever on Twitch.

While this Among Us stream is a standout moment in a chaotic year, it also highlights what makes Among Us so popular and appealing: It’s a simple concept that anyone can enjoy playing or watching because it's inherently more of a social experience than a video game.

'Washington Post' rounded up some of the stream's best moments right here.

AOC announced her intention to stream on Monday via Twitter as a way to encourage Americans to vote in the upcoming Presidential election and to promote the iwillvote.com resource for voters. "Anyone want to play Among Us with me on Twitch to get out the vote? (I’ve never played but it looks like a lot of fun)," she wrote. The congresswomen were joined by Pokimane, HasanAbi, and a number of other prominent personalities.

AOC and Ilhan Omar were newcomers to the game and took some time to get their their bearings on how the game worked as both a Crewmate and an Imposter. Within just a few matches, they got the hang of Among Us, leading to moments like when AOC recognized Ilhan vented and could call her out as an Imposter.

Overall the reception to the stream has been positive. Its success, and to a broader extent the success of Among Us as a whole, comes down to how easy it is to pick up and play. While games like Valorant succeed by appealing to people interested in high-level competitive play, Among Us’ simplicity makes it one of the most appealing and popular games of 2020.

All players can do in Among Us is move around, kill, call meetings, and complete very simple minigames that often boil down to clicking something onscreen. This allows the game to transition nicely to both PC and mobile phones, the two gaming platforms with the broadest appeal. Additionally, it means that people that for people who have never played the game like AOC, it's fairly easy to learn the ropes and get swept up in the heated debates Among Us brings.

Players spend most of their time within meetings. More traditional gameplay happens in short bursts, mainly serving as the catalysts for heated debates and discussions between friends. The developers have even acknowledged in an interview with Kotaku Australia that this formula is what made the game eventually catch on with streamers during a year where we are all quarantined away from each other.

Among Us taps into the same enjoyment that competitive social games like Mafia had, except in a more modern, software-based form. If it wasn't simple, the game would've never achieved the same level of success. Just look at similar but more complicated games like Murderous Pursuits that never caught on to see how that's the case.

Among Us is an approachable experience that anyone can quickly become obsessed with. We saw that play out in real-time during AOC’s stream yesterday. The stream lasted three and a half hours, well beyond its originally intended runtime. Now, it's among one of the most popular Twitch streams ever. That might not have been the case if they were playing another game like Fall Guys: Ultimate Knockout, Valorant, or League of Legends, which AOC also plays.

This stream proves that Among Us might just be the ultimate casual game in that it appeals to both people who stick to popular mobile games like Farmville or Candy Crush and the more hardcore gamers that play all of the latest AAA games. As such, it doesn't seem like the popularity of Among Us will wane anytime soon.

Among Us is available now for PC, iOS, and Android.