"Maybe this will be the last hurdle." 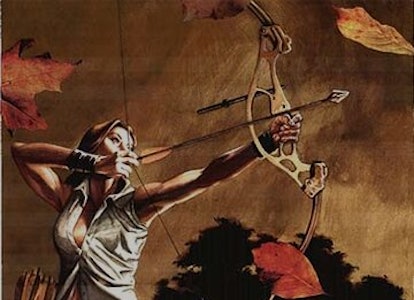 Hollywood has been trying to turn Y: The Last Man into a live-action story for over a decade, but the comic book adaptation has hit yet another stumbling block, this time due to Coronavirus. Series star Imogen Poots tells Inverse that production on the FX series has been delayed because of the COVID-19 pandemic that has already laid waste to an entire slate of planned movies and TV shows from Marvel, DC, and more.

“We've been postponed much like every other project, which I think is a good thing,” Poots says in an interview timed to her new film Vivarium (out on digital on March 27).

For now, the fate of Y: The Last Man, which announced a new cast member as recently as last week, is up in the air. Poots is still hopeful that the series will eventually get made, though she also acknowledged that it’s had multiple setbacks since a pilot episode was ordered in 2018.

“We'll just have to wait and see,” she says, “and maybe this will be the last hurdle for Y: The Last Man to overcome. And then it might even be filmed, which would be cool.”

Created by Brian K. Vaughan and Pia Guerra and published by DC's Vertigo Comics, Y: The Last Man ran from 2002 to 2008. It takes place in a world where all living mammals with a Y chromosome simultaneously die on July 17, 2002, throwing civilization into chaos and threatening the extinction of the human race.

The only male survivors are a young amateur escape artist Yorick Brown and his monkey Ampersand. With help from the U.S. government, they set off to save humanity, all while being pursued by multiple people and groups seeking to kill Yorick or use him for their own purposes.

Imogen Poots is set to play Yorick’s sister Hero Brown, who, in the comics, is initially brainwashed to kill her brother by a terrorist group called Daughters of the Amazon. Led by the charismatic Victoria, the Daughters of the Amazon believe the death of all males was an intentional “cleansing” by Mother Earth. So they go around burning sperm banks and destroying patriarchal monuments.

New Line Cinema initially bought the rights to Y: The Last Man in the late 2000s with plans to move forward on a script. Actors such as Shia Lebouf and Zachary Levi (Shazam!) were linked to the role of Yorick before the project stalled out and the rights reverted to the creators of the comic in 2014.

FX began developing a show in 2015 and officially ordered a pilot episode in 2018 with a cast that included Poots and Lashana Lynch (Captain Marvel). In 2020, the adaptation got a new showrunner in Eliza Clark and recast Yorick with the relatively unknown actor Ben Schnetzer. That brings us to the present as Y: The Last Man hit its latest, and hopefully last, setback.

In the meantime, Poots is back home in London with her boyfriend and parents. She's attempting to stay safe and keep busy during a strange and uncertain time that will likely inspire a wave of new stories not unlike Y: The Last Man.

“I think we're all in the same boat with helping along our families to stay home," she says. "Our parents are like: What are you talking about? It's just like allergies. And I'm like, No, it's not.”

When asked what she’s doing to pass the time, Poots says she’s “been emptying my bank account at bookshops” to stock up for what could be months of isolation.

“I'm a big fan of this writer, Adam Phillips, who is a Freudian guy. He's pretty great to read," she says. "And I got a bunch of George Saunders, which at times like these is very helpful. I'm stocked up.”

Like many of us, she’s also been indulging in some entertainment that may feel a little too real these days.

“I watched A Quiet Place last night,” Poots says, “which I haven't seen before and I really loved. I thought it was so smart and so cool.”

Poot’s latest film, Vivarium stars the up-and-coming actress across from Jesse Eisenberg as a young couple looking to buy a home who wind up trapped and alone in a surreal planned suburban community. The two previously worked together on 2019's The Art of Self-Defense.

Check back later this week for coverage of Vivarium and more from Inverse’s interview with Imogen Poots.