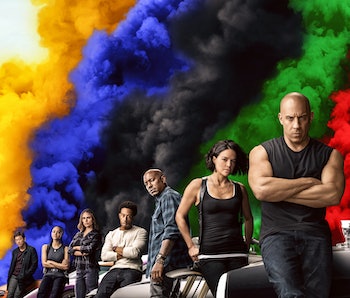 Even if you live life a quarter-mile at a time, that's not fast enough to outrun a pandemic.

The theatrical release of Fast & Furious 9, also titled F9, has been postponed in one of the most substantial delays for a major Hollywood production due to the coronavirus pandemic. The movie will now open in theaters in April 2021, nearly an entire year after its planned May 2020 debut. Fast & Furious 9 will open in North America on April 2, 2021, replacing what would have been Fast & Furious 10.

On Thursday, the official social media channels for F9 released a statement confirming the 11-month delay. While the novel coronavirus, or COVID-19, was not referenced directly, the statement cited that the move "is made with the safety of everyone as our foremost consideration."

The statement is below:

To our family of Fast fans everywhere,

We feel all the love and the anticipation you have for the next chapter in our saga. That’s why it’s especially tough to let you know that we have to move the release date of the film. It’s become clear that it won’t be possible for all of our fans around the world to see the film this May.

We are moving the global release date to April 2021, with North America opening on April 2. While we know there is disappointment in having to wait a little while longer, this move is made with the safety of everyone as our foremost consideration. Moving will allow our global family to experience our new chapter together. We’ll see you next spring.

The statement was signed, "Much love, Your Fast Family."

F9 is not the first major Hollywood movie to push back its theatrical debut. Daniel Craig's final James Bond movie No Time to Die already moved to November and A Quiet Place Part II was delayed indefinitely by director John Krasinski. But F9 is one of the longest delays yet by as COVID-19 casts uncertainty over numerous industries, from travel to commerce.

Among the biggest cancellations so far are the annual SXSW and Coachella festivals, the NBA's regular-season games, and the March and April games in the Overwatch League. The NCAA's March Madness tournaments will take place in empty arenas in order to minimize the spread of the virus.

Measures to prevent the spread of the virus are now extending to film and TV production. One can only expect more studios to shuffle releases and pause ongoing productions. Disney recently hit the brakes on European shoots for the upcoming Marvel series, The Falcon and the Winter Soldier over the coronavirus, though the one-week shoot likely wasn't enough to derail the production schedule substantially. The show is still scheduled to premiere on Disney+ in August 2020.

It was just a month ago when Universal held a star-studded outdoor concert in Miami to release the F9 trailer, which revealed the return of actor Sung Kang as fan-favorite character Han. Now, fans will have to wait even longer for "The Fast Saga" to bring justice for Han.

The delay of Fast & Furious 9 also casts a shadow over Fast & Furious 10, originally intended to be released in that 2021 slot. The tenth movie is rumored to reunite Dwayne Johnson and Jason Statham's spin-off characters (who starred in 2019's Hobbs & Shaw) back into the main story. But production has not yet begun and may face delays owing to ongoing health and safety concerns.

More like this
Entertainment
Jan. 26, 2023
Shazam! Fury of the Gods trailer pits the family against Helen Mirren and her dragon
By Mónica Marie Zorrilla
Entertainment
Jan. 19, 2023
Netflix's next big sci-fi franchise finally has a release date
By Eric Francisco
Entertainment
Jan. 25, 2023
Polite Society breaks the mold for the coming-of-age movie
By Andy Crump
LEARN SOMETHING NEW EVERY DAY.
Related Tags
Share: