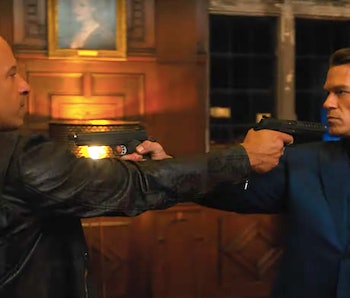 Justice is served. The trailer for Fast & Furious 9, which premiered after a rousing concert in Miami, revealed the stunning return of a fan favorite character: Han Seoul-oh, played by Sung Kang. The character was killed in 2006's The Fast & the Furious: Tokyo Drift (set after the events 2013's Fast & Furious 6), but now he's back under mysterious circumstances.

On Friday, Universal Pictures released the trailer for Fast & Furious 9, the ninth film in the popular action film franchise releasing in theaters on May 22. The film marks the return of veteran Fast & Furious director Justin Lin, who last directed 2015's Furious 7.

The film's trailer introduces newcomer John Cena as Jakob, a master criminal and Dom Toretto's blood brother. The two butt heads in an epic battle that spans all areas of the globe, forcing Dom to reassemble his crew once more.

But the big surprise came at the end of the trailer. Out of nowhere, Han, the Korean-American street racer who represented drift racing in Dom's crew of misfits, makes an impossible return from the dead. The character was first introduced, and then killed, in the 2006 film Tokyo Drift. He appeared in other movies afterward, cementing a confusing timeline. He was officially deemed dead in 2015's Furious 7, when his killer Deckard Shaw (played by Jason Statham) revealed himself to Dom's crew.

Now in Fast & Furious 9, Han returns from out of the shadows, with a newly shaved head and the same ex-smoker's appetite. (He famously had a habit for snacking.) Exactly how Han returns is a mystery, especially as the film franchise hasn't really explored science-fiction or supernatural territory. Series veteran Michelle Rodriguez even joked about this onstage at the concert following the trailer's premiere.

When the characters of Fast & Furious began warming up to his killer, fans began crying foul, creating the social media hashtag #JusticeForHan. The trailer winks at this hashtag, with text reading: "Justice is coming."

As we wrote in October 2019: Han is a character played by Sung Kang first introduced in franchise interlude film Fast & Furious: Tokyo Drift. Han dies in an explosive car wreck in the film but in classic F&F fashion, he proved so popular that he came back for the next three movies (effectively setting a nonlinear timeline up for the rest of the franchise, with films four, five, and six all taking place before Tokyo Drift). In a post-credits scene in Fast & Furious 6 it’s revealed that his car wreck is orchestrated by Jason Statham’s Deckard Shaw, the villain of Furious 7.

You can watch the trailer for Fast & Furious 9 below.