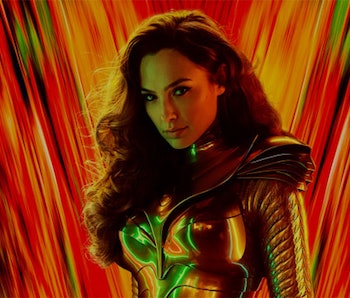 The novel coronavirus, or COVID-19, has disrupted the world in ways even Lex Luthor could not imagine. With concerns over public health a priority, many TV and movie productions are hitting the brakes in order to prevent further spread of the virus. That includes stuff from Warner Bros. and DC, with many of the new DC superhero movies and popular TV shows halted due to the pandemic.

As of March 20, here is the current status for all the upcoming movies from DC Films and seasons of DC TV that have been affected by COVID-19.

Warner announced on Tuesday that Wonder Woman 1984 had officially been pushed from it's planned theatrical release in June back to August 14. Whether the coronavirus pandemic has abated by then and movie theaters are able to reopen remains to be seen, but for the time being, that would rule out the straight-to-digital release that the studio reportedly considered.

Production on The Batman, Matt Reeves' Batman prequel/reboot starring Robert Pattinson, was already underway when the global pandemic suddenly worsened. On March 14, Variety reported that the film was abruptly shut down in London for a scheduled two weeks. It is unknown if the film will resume shooting after two weeks, but we're guessing it won't.

Production on The Suicide Squad, the sequel to 2016's Suicide Squad, wrapped less than a short month ago in late February and had entered post-production. That was before the coronavirus got really bad. While nothing seems to be dramatically changed for the movie, directed by James Gunn, one of the film's stars Idris Elba was confirmed positive for the virus on March 16.

We just texted and he seems in good spirits. He’s a great guy and he’s in my prayers. I’m concerned for him, of course, but right now he’s not exhibiting symptoms which is good. But it goes to show us all we could be contracting it from someone without symptoms out there- of whom there are many, because we aren’t set up to properly test folks in the US. So socially distance yourself as much as possible!

Due to the uncertainty of how or when Elba contracted the virus, and when that happened in relation to shooting The Suicide Squad, it is unknown how the movie's 2021 release will be impacted. For now, there are seemingly no significant changes and the movie is still expected to hit theaters on August 6, 2021.

Dwayne Johnson's DC anti-hero movie, in which the star will play Shazam's greatest arch-nemesis in his own movie, is still on track to begin shooting this summer. Twice on Instagram, and at different times within the last week, Dwayne Johnson talked up Black Adam as if it's still ready to film later this year.

In one Instagram post, published on March 12, Johnson shared a photo of himself mid-workout where he confirmed in the caption, "shooting begins this summer." Later, on March 17, Johnson released a 12-minute Q&A video where he talked about the story and themes of Black Adam, which again he said will shoot this year.

But the situation could easily worsen, and some of Johnson's ongoing projects have already paused. His Netflix movie Red Notice, a new action spy movie co-starring Gal Gadot and Ryan Reynolds, stopped shooting in order for the crew to stay home and prevent the spread of the virus. A portion of Johnson's speech to the crew of Red Notice was again shared on Instagram.

Should the pandemic worsen in the weeks and months to come, principal photography on Black Adam will potentially post-pone for a time.

The Arrowverse (The Flash, Supergirl, Batwoman)

In almost one fell swoop, Warner Bros. paused production on all of its shows on The CW. Many shows were heading towards filming their season finales when the pandemic forced the studio to freeze.

On Deadline, a giant list of TV shows affected by the coronavirus included most of the Arrowverse franchise. The shows The Flash, Supergirl, and Batwoman are halted from shooting their current seasons. The first to stop production was The Flash until the rest of the network's slate joined.

It is unknown what The CW will do should its shows be unable to shoot its final episodes of the season.

Over on DC Universe, the third season of Titans was in production until the pandemic. It is currently unknown if shooting the next season of the series has stopped. Inverse has reached out to Warner Bros. and will report back when we know more.

The eccentric DC Universe TV series, which will also hit HBO Max when the service launches in the future, halted production, as confirmed by Deadline. It is unknown when the show will resume shooting.

Stargirl, the new DC TV show that will air on both The CW and DC Universe, is still set to premiere on May 11. Unlike movies that open in theaters, TV premieres have mostly gone unchanged amidst the pandemic, so it's a safe bet that DC fans will still get to meet Courtney Whitmore (played by Brec Bassinger), who inhabits Earth-2 in the new post-"Crisis on Infinite Earths" continuity.

The show also wrapped its whole first season back in August 2019, making it more than possible that Stargirl will air in its entirety through the pandemic.