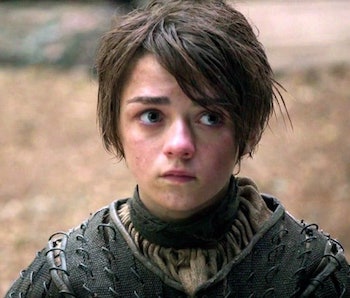 Hellbent on revenge, Arya Stark finally went after Walder Frey — who killed her mother and brother, Catelyn and Robb Stark — in Game of Thrones Season 7. The scene was bloody, brutal, and spectacular payoff for Arya’s long-simmering. It was one of the highlights of the HBO series’ later seasons. But, what if it had played out differently?

Winds of Winter — the long-delayed sixth book in George R.R. Martin’s A Song of Ice and Fire book series — could change one of Arya’s best scenes by incorporating Lady Stoneheart, aka Arya’s undead mother.

Catelyn may have died in Season 3 of Game of Thrones, but the Stark matriarch lived on as Lady Stoneheart in Martin’s books. Well, sort of. Three days after her death, Catelyn was resurrected by Beric Dondarrion, aka the lightning lord and follower of the Lord of Light religion, in A Storm of Swords. Beric exchanged his long and unnatural life for hers, healing her fatal wounds while leaving her voiceless.

Thus, Lady Stoneheart was born. However, like Jon Snow was changed after his resurrection in Season 6, Catelyn’s return to life altered her personality as well. She was no longer loving, thoughtful or compassionate. Rather, Lady Stoneheart was much more angry and merciless, vowing vengeance on anyone who had wronged her or her family. She assumed leadership of Beric’s merry band of outlaws and went on to kill Walder Frey’s brother and son.

A Dance with Dragons left off with Catelyn attempting to hang Brienne of Tarth and Podrick Payne for refusing to kill Jaime Lannister after insisting he's a changed man. Meanwhile, Arya is still training with the Faceless Men in Braavos. Arya's still unaware of her mother's resurrection.

Likewise, Catelyn has no clue what her daughter's been up to since Arya fled King's Landing. It's possible that The Winds of Winter will see them join forces to take down Walder Frey and avenge Robb. Both their hearts grew colder in the years since the Red Wedding. Like mother, like daughter.

It's unclear if Martin's The Winds of Winter plans include Lady Stoneheart, or if exacting revenge on Walder Frey is still on the table. That said, Arya's bound to realize at some point that her mother's been killing Stark traitors. Knowing Frey is still very much alive might mean that his death scene will be altered to include Catelyn as Arya's accomplice.

That way, the satisfying Game of Thrones scene from Season 7 will be made all the better by giving both Stark women their vengeful due. After all, both women want the exact same thing. With Catelyn's fury and Arya's newfound skills, the pair could sneak into Frey's castle undetected. Just imagine the look on his face when he realizes that Catelyn isn't as dead as he thought.