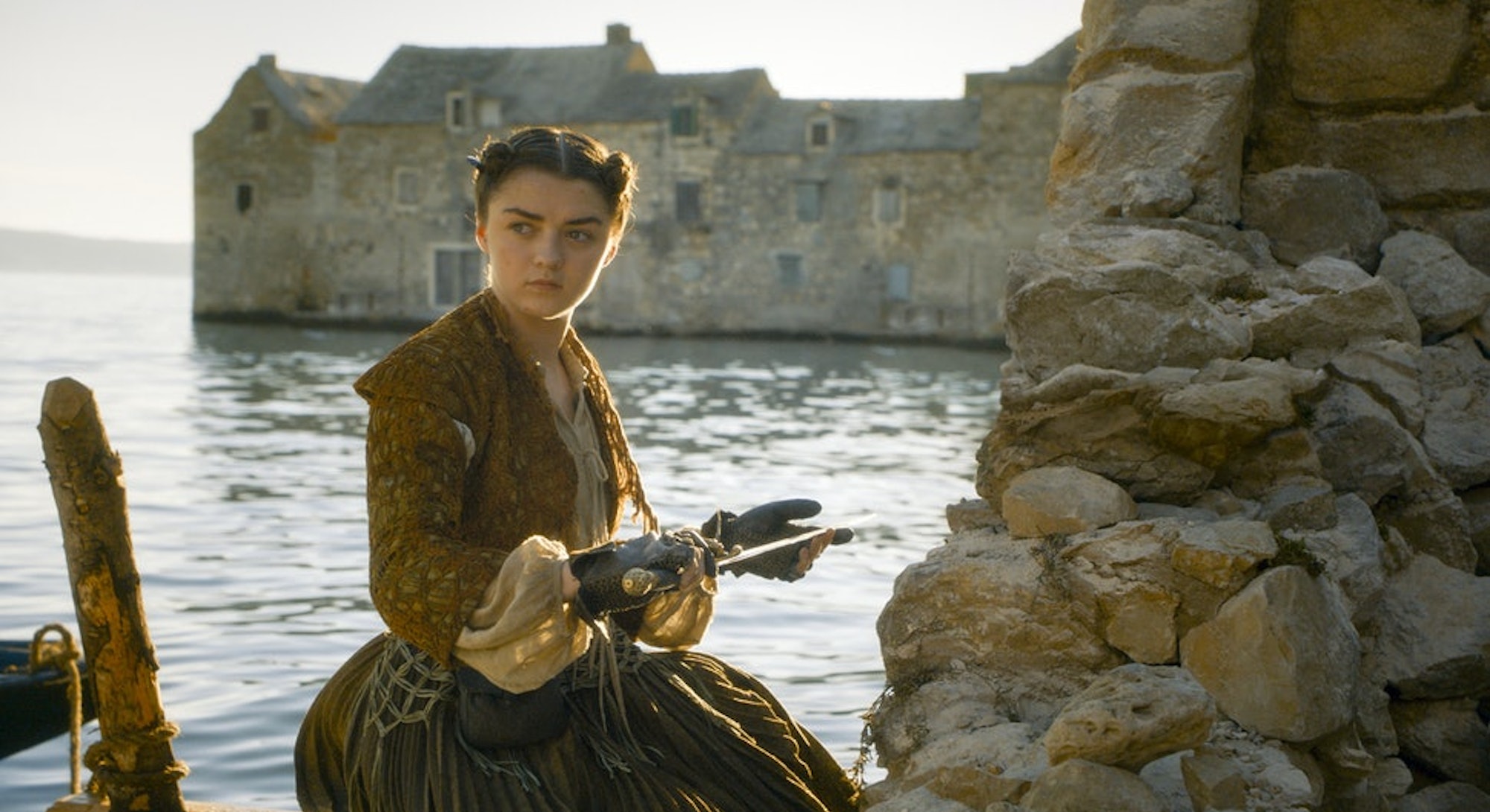 The Faceless Men disappeared from Game of Thrones after Season 6 of the HBO series, but Winds of Winter may make them more relevant than ever.

Arya Stark spent much of Game of Thrones seeking revenge on those who had wronged her family. Cersei Lannister, Sandor Clegane, The Mountain, and Walder Frey were among the many names on her hit list. This need for vengeance ultimately led her to Braavos, where she trained to become a highly skilled assassin with the Faceless Men. Arya later defected from her training and returned to Winterfell in Season 7.

Despite all that she learned about the will of the Many-Faced God and shedding her identity, Arya returned to her vengeful ways shortly thereafter. With that in mind, The Winds of Winter — the sixth book in George R.R. Martin’s A Song of Ice and Fire series — may finally explore the repercussions of Arya’s actions and make the Faceless Men more relevant to the story by sending them after her as punishment for taking one life too many.

Arya first crossed paths with Jaqen H'ghar in Season 1 of Game of Thrones. Following the beheading of her father Ned Stark, Arya fled King’s Landing and wound up in the same caravan with Jaqen, headed for Harrenhal. As one of the Faceless Men, a secret society of assassins who worshiped the Many-Faced God and adhered to the will of death, Jaqen could transform his physical appearance to become anyone.

The Faceless Men killed only their intended targets and the deaths had to look like accidents instead of murder, so as to avoid any and all attention. What’s more, the Faceless Men — who were considered the elite in the hierarchy of those worshiping Him of Many Faces — were committed to the ethic of "a life for a life," meaning no assassination was executed without a sacrifice.

“All men must die. We are but death's instruments, not death himself. When you slew the singer, you took god's powers on yourself. We kill men, but we do not presume to judge them.” —A Dance with Dragons

After Arya saved Jaqen’s life at Harrenhal, he vowed to kill three people of her choosing. Arya was fascinated by Jaqen’s skills, but initially refused his offer to accompany him to Braavos. Later, she was resolved to exact her revenge, and some secret ninja training seemed like the best way to do it.

Training to Become No One

Befriending Jaqen and being offered a place in the House of Black and White in Braavos gave Arya a sense of purpose and a respite from her pain. She would no longer be the girl whose father died, or the girl with a thirst for revenge. Training with the Faceless Men and shedding her identity to become “no one,” so as to take on anyone’s face and slip into a role, taught her obedience, patience, and the ability to walk among the people unnoticed.

Most importantly, Arya was taught that death was a part of the natural order, but that it was not her choice who died. In short, Arya’s identity and thirst for revenge would have to be abandoned if she was to truly become no one and do the Many-Faced God’s bidding. However, that was the one lesson she was never able to get onboard with.

In Season 7, Arya went on to kill several more people on her list, including all of House Frey in revenge for killing Catelyn and Robb Stark. It was a brutal, unforgettable scene that combined Arya’s hunger for vengeance with her newfound skills of stealth and cunning as an assassin.

“We do not kill to serve some lord, to fatten our purses, to stroke our vanity. We never give the gift to please ourselves. Nor do we choose the ones we kill. We are but servants of the God of Many Faces.” —A Dance with Dragons

However, that act alone violated the "life for a life" condition of the Faceless Men. Yet the HBO series held no consequences for Arya. Neither Jaqen nor the Waif ever appeared in Game of Thrones again. The Winds of Winter could change that.

Martin’s books haven’t yet reached the point of Arya's return to Westeros. It’s also unclear if the author will move forward with this line of events, or provide Arya with a different storyline. However, as of the first few chapters of The Winds of Winter, Arya was still training with the Faceless Men and had graduated to become an acolyte. She was sent off to be the apprentice of Izembaro, the leader of an acting troupe to further her training.That’s all well and good, but something changed rather quickly. Arya went off script and, upon realizing that Raff the Sweetling — one of The Mountain’s men and one among the several names on her hit list — was in Braavos, she made the personal decision to kill him. But, unlike what happened on Game of Thrones, Arya’s actions could have major consequences.

Perhaps Arya, knowing that the Faceless Men will catch onto what she did without their consent, will leave Braavos behind for good after killing Raff. And, should the youngest Stark daughter go on to use what she learned to assassinate Walder Frey and his family, the repercussions could be severe. After all, she broke the rules and the will of the Many-Faced God and that doesn't sound like something they'd let slide so easily.

It’s possible Jaqen and the others will learn of Arya’s string of murders and come after her, bringing the them back to the forefront. It’s hard to imagine that a religion as powerful and as secretive as the Faceless Men would let a former member go without punishing Arya, who, as badass as she was on the HBO series, did a lot of questionable things without ever being held accountable.

The Winds of Winter could rectify that by forcing Arya to face the repercussions of her actions. By having the Faceless Men come after her, it’s possible their role will be more relevant in the books than it ever was on the show.