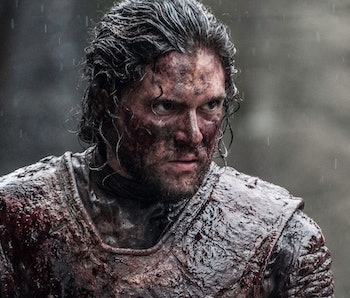 Game of Thrones made it seem like Lord Eddard Stark — best known to all as Ned — had no close friends beyond King Robert Baratheon. A Song of Ice and Fire book readers know better. On the show, Howland Reed appeared only in brief flashbacks to Ned’s youth in Season 6. There’s a chance that George R.R. Martin’s The Winds of Winter will finally bring him to the forefront. As the only other witness to Jon Snow’s birth, his return could prove to be a crucial turning point in revealing Jon’s true lineage.

In Season 6, Bran Stark began seeing visions from the past. When revisiting these moments, he learned that his aunt Lyanna Stark wasn’t abducted by Rhaegar Targaryen as he'd always been told. Instead, she willingly married Rhaegar and gave birth to their son, Aegon, aka Jon Snow. The only person who knew the truth at the time was Ned and his loyal, if forgotten, friend Howland Reed. Howland did little beyond fight at Ned’s side on Game of Thrones, but he played a bit of a larger role in Martin’s books.

“My father knew the worth of Howland Reed.” —Robb Stark, A Storm of Swords

Howland is practically a recluse and Bran couldn’t recall him ever having visited Winterfell (because he never did). After fighting alongside Ned in Robert’s Rebellion and witnessing Lyanna’s death, Howland eventually retreated to become Lord of Greywater Watch, a castle built upon a floating island in the swamps north of Westeros. However, no one has ever been able to find the island and its mystical nature allows it to reappear in different places, which keeps it hidden from nearly everyone.

Howland’s children, Meera and Jojen Reed, later pledged their loyalty to House Stark on behalf of their father, further strengthening the allegiance between the two houses. Meera and Jojen accompany Bran on his perilous journey beyond the way, and Jojen gives his life to ensure that journey is completed. While many online fan theorists assumed Meera and Bran's bitter parting in Game of Thrones Season 7 would pave the way for Howland's appearance to legitimate Jon Snow's claim to the throne in Season 8, but that never happened.

By the end of A Dance with Dragons, Howland’s whereabouts are still unknown. He hasn’t made a reappearance in present day. That said, Robb Stark all but confirms Howland is still very much alive before his own untimely death. With that in mind, it's possible The Winds of Winter will finally see Howland leave his well-hidden island and rejoin society. Though he hasn’t been an active player for many years, Howland is an incredibly important character and his presence could be a major turning point in the story.

Martin plans to resurrect Jon Snow like in the HBO series, it’s possible Howland could return in time to reveal Jon’s true parentage and rightful claim to the Iron Throne. After all, Howland is the last living person to know what really happened with Lyanna and his testimony would rock Westeros to its core.

Unfortunately, the secret of Jon’s lineage was overlooked on Game of Thrones, used primarily as a plot device that helped drive Daenerys Targaryen to madness. The huge potential of that volatile secret fizzled out with a whimper on the HBO show. Howland finally unburdening himself of the secret of Lyanna and Rhaegar’s affair would certainly shake things up in the books. What’s more, it would make Jon and his true lineage far more relevant to the storyline, and that’s exactly the boost The Winds of Winter needs.

The Winds of Winter doesn’t yet have a scheduled release date.