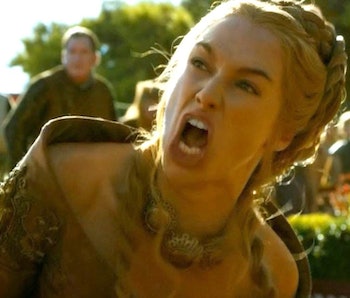 Cersei Lannister is like a viper, poisoning nearly everyone who crossed paths with her on Game of Thrones. Many of her actions seemed influenced by her desire to thwart the prophecy she heard in her younger years from Maggy the Frog, which suggested she would be usurped as queen and that all her children would die. In Season 7, Cersei revealed that she was pregnant again, but fans began questioning whether that was even true by Season 8.

However, Game of Thrones never truly did anything with the storyline and George R.R. Martin’s The Winds of Winter, the sixth book in A Song of Ice and Fire series, may finally answer the weirdest Cersei mystery from the show.

Over the seasons, Cersei’s storyline began to decline. By Season 7, all three of her children were dead and she was holding onto the past and her power with a forceful vengeance that ultimately led to her demise. In Game of Thrones’ penultimate season, Cersei told her brother-lover Jaime that she was pregnant and that the child was irrevocably his. Younger brother Tyrion also surmised that she was with child after she passed up the offer to drink wine, though Cersei continued carrying around her vino for the rest of her days.

In Season 8, however, something changed. Jaime, for one, didn’t seem to care all that much that Cersei was pregnant, leaving her behind in King’s Landing and journeying north to Winterfell. Following Jaime’s departure, Euron Greyjoy entered the picture, allying himself with Cersei in her fight against Daenerys Targaryen.

He promised her the Golden Company’s fleet and a horde of elephants (which Cersei really, really wanted) in exchange for someday being king.

Of course, it wasn’t a match made in heaven and Cersei hated his guts. Still, they slept together and Euron promised Cersei that he would “put a prince in your belly.” But, Cersei was already pregnant, right? While Maggy’s prophecy foretold that she and Jaime would only have three children, it seemed like Game of Thrones was attempting to mine some drama from a new pregnancy subplot. However, it only ended up confusing fans and throwing Cersei’s storyline entirely out of whack.

Was she pregnant or not? The HBO series never offered a definitive answer and Cersei died before her presumed pregnancy was ever visible. She could have miscarried for all we know. Conversely, she may have used the information as a ploy to keep Jaime around for longer.

With all that in mind, The Winds of Winter may finally shed some light on this strange and mysterious storyline. In a Dance with Dragons, Cersei had just completed her walk of atonement after being held in the Great Sept for a time. King’s Landing was still in chaos and Jaime was nowhere to be found. It’s possible that George R.R. Martin will forego the entire pregnancy storyline and provide Cersei with a better and thorough storyline.

After all, Game of Thrones surpassed the source material and that means that The Winds of Winter aren’t beholden to the same plots. Should Martin decide to include Cersei’s pregnancy, the sixth book could offer further insight into whether or not she was actually faking her pregnancy. Either way, there’s still time to course correct and give Cersei a more deserving storyline than the one she suffered through in the show's finale season.

More like this
Entertainment
14 minutes ago
6 Game of Thrones episodes you must rewatch before House of the Dragon
By Alex Welch
Culture
8.3.2022 9:00 AM
7 amazing sci-fi shows and movies coming to HBO Max in August 2022
By Robin Bea
Culture
3 hours ago
Dracarys! 7 crucial questions about House of the Dragon answered
By Robin Bea
Related Tags
Share: