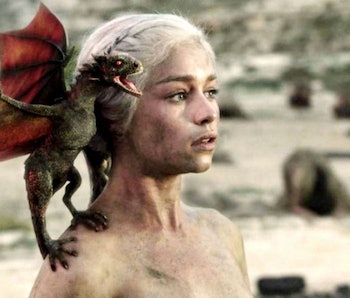 Before learning they were actually aunt and nephew, Daenerys Targaryen and Jon Snow were drawn to each other romantically. In Game of Thrones Season 7, Jon swore that he would follow Daenerys. They rode her dragons together and sexy times ensued, but Daenerys knew a child would not be born from their union. Due to the prophecy of the scheming witch Mirri Maz Duur delivered to her in Season 1, Dany was convinced she was no longer fertile.

Prior to the start of Season 8, fans speculated Dany could be pregnant with Jon’s child. Had the widespread theory proven true, it would have eradicated all of Daenerys’ previous fears and established a successor for the Iron Throne. Now, George R.R. Martin’s The Winds of Winter — the sixth book in the series A Song of Ice and Fire — might (and should) answer the question of whether Daenerys can have children.

In Season 1, Daenerys married Khal Drogo and became pregnant with their son, Rhaego. The child was stillborn, presumably due to Mirri Maz Duur's blood magic. The witch ultimately used Rhaego’s life to help restore Drogo, who remained in a vegetative state and never recovered.

Mirri prophesized that Drogo would be back to his old self when “the sun rises in the west and sets in the east. When the seas go dry and mountains blow in the wind like leaves.”

Daenerys blamed Mirri Maz Duur for the death of her husband and child, and burned the mystic on Drogo’s funeral pyre. Still, Mirri’s prophecy haunted Dany for the rest of her days. It’s arguably why she was so protective of her three dragons — in a way, they filled the void of the human children she believed she could no longer have. In Season 7, she told Jon Snow that “they’re the only children I’ll ever have. Do you understand?”

The thing is, Mirri Maz Duur never actually said that Daenerys would never bear children. In fact, Game of Thrones left out a substantial chunk of the prophecy from Martin’s books, which may suggest Drogo will return when Dany has another baby. Bearing another child wasn't a matter of if, only when.

“When your womb quickens again, and you bear a living child. Then he will return, and not before,” said Mirri Maz Duur.

Leaving out this part of the prophecy may have changed the outcome of the series. Of course, Daenerys was killed by Jon Snow in Season 8, rendering the idea of bearing children and the succession of the Iron Throne moot.

However, The Winds of Winter is poised to offer more of Dany’s perspective, meaning Martin could finally resolve the issue regarding the Mother of Dragons’ presumed infertility. The prophecy seems to imply that she will conceive once again at some point in the future, though whether or not it'll be with Jon Snow remains unclear (he's still dead in the books).

It’s possible that Dany will be pregnant again by the end of The Winds of Winter and, though Drogo may never be resurrected, his prophesied “return” suggests that Dany will name her son after him. Whatever happens, the books will hopefully provide the answers the show never did.