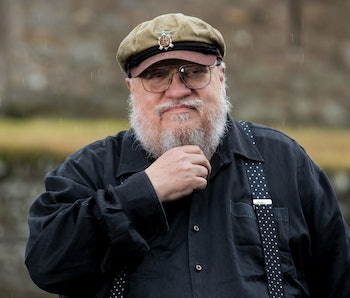 It’s been nine years since A Dance with Dragons was published and fans have been waiting for George R.R. Martin to finish The Winds of Winter, the highly-anticipated sixth installment of A Song of Ice and Fire series. Last month, the author wrote that he was in isolation and “spending more time in Westeros,” giving fans reason to hope he would be done with the book soon. However, Martin’s latest Winds of Winter update is a mixed bag.

In his most recent blog update, Martin revealed that he wouldn’t be traveling to New Zealand as planned this year, since the annual World Science Fiction Convention (CoNZealand) has been cancelled due to the coronavirus pandemic. Instead of canceling the con, however, it will be hosted virtually. Martin added that the “silver lining” is that the change of plans will give him more time to finally finish writing Winds of Winter.

While that is indeed a silver lining, the news also suggests that Martin is nowhere near close enough to finishing the book by this summer as promised.

For some background, Martin wrote last year that he would have The Winds of Winter completed in time for this year’s CoNZealand, which was scheduled to begin July 29 and end on August 2. If the book wasn’t completed by then, Martin wrote that he would allow himself to be locked away until he could deliver on his promise. Here’s what he wrote:

“But I tell you this — if I don’t have THE WINDS OF WINTER in hand when I arrive in New Zealand for worldcon, you have here my formal written permission to imprison me in a small cabin on White Island, overlooking that lake of sulfuric acid, until I’m done.”

Martin has been toiling away at Winds of Winter for years and has even released several chapters of the book online. But he's refrained from giving readers a hard deadline: promising he'd finish by CoNZealand 2020 might be the closest he’s ever come. Now that he’s isolated, however, it’s given him more time to finally write without distraction or interruption. That said, it still doesn’t sound like he was going to be done before the con, regardless of external influences.

Martin closed his latest post by suggesting some books for fans to read — Fire & Blood and A Knight of the Seven Kingdoms among them — ahead of Winds of Winter’s release. He encouraged readers to check out his Wild Cards series, which includes 29 books that “should keep you reading for a good long time.” Sure, Martin continues to write, but implying that readers have time to read dozens of books before Winds of Winter suggests a firm release date is still along ways off.

The Winds of Winter doesn’t have a scheduled release date yet.