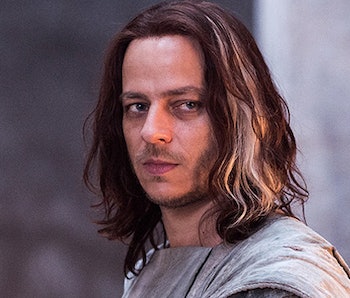 A year after Game of Thrones wrapped its eight-season run, Jaqen H’ghar remains a rather dubious character. First introduced in Season 1 as a Lorathi criminal, Jaqen — a member of the mysterious assassin group the Faceless Men — is imprisoned in the dungeons at King’s Landing. However, we never learn why Jaqen was arrested in the first place.

One popular theory suggests that Jaqen was in King’s Landing to receive assassination orders from King Robert Baratheon, and the HBO series never refutes these ideas, but it never confirms them either. However, it’s possible that George R.R. Martin’s The Winds of Winter, the sixth book in his A Song of Ice and Fire series, will finally reveal Jaqen’s true reason for visiting King’s Landing.

At the time of Jaqen's arrival in King’s Landing, Ned Stark was still working as the Hand of the King. However, the Stark patriarch had no intention or desire to remain King Robert’s aid. He quits once he realizes that Robert and the council plan to find and kill Daenerys Targaryen, the true heir to the Iron Throne. Right before Ned leaves, Robert and the small council bring up the Faceless Men, who disguise themselves wearing the faces of those they’ve killed to carry out their orders. It's a fleeting moment and one that barely registers.

The Faceless Men are never involved in the events of King’s Landing, though. Or so we thought.

Reddit user batnado12344 posits that the very reason Jaqen sets foot in King’s Landing is to assist in the planned assassination of Daenerys. Or, at the very least, he is there to officially receive his orders.

But something changed in between his recruitment and his arrival in the city: King Robert dies and Ned is arrested for treason on Cersei Lannister’s orders. She couldn’t have everyone knowing that her son Joffrey had no legitimate right to the throne, now, could she? Good thing there's an assassin on hand...

It’s possible Cersei quietly rewrote Jaqen’s assassin contract to make Ned Stark the new target. This theory offers an explanation as to why the assassin finds his way onto the Night’s Watch caravan. If Ned had been pardoned — which was the plan until Joffrey went rogue — he would have crossed paths with Jaqen on his way back to Winterfell.

Naturally, things don’t pan out that way. Joffrey ends up beheading Ned instead, altering the course of the story forever.

A second theory expands on this idea but suggests that it’s Cersei and Jaime who initially hire Jaqen to kill Ned, knowing his honest nature and closeness to Robert would interfere with their own plans. Meanwhile, yet another spinoff theory speculates that Jaqen was actually in King’s Landing to kill Syrio Forel, a master fencer and former First Sword of Braavos who becomes Arya’s tutor.

With all this in mind, George R.R. Martin has the opportunity to explain the reason behind Jaqen H’ghar’s presence in King’s Landing in The Winds of Winter. At the very least, the book can lay all the speculation to rest.

Jaqen’s last novel appearance was in A Feast for Crows. In that book, he greets Samwell Tarly as Pate, a novice at the Citadel where Samwell is currently staying. What his intentions are and why he’s there is unclear, but Jaqen’s storyline is clearly far from over. And the only way for the man’s story to end is to finally answer the question of his beginning.