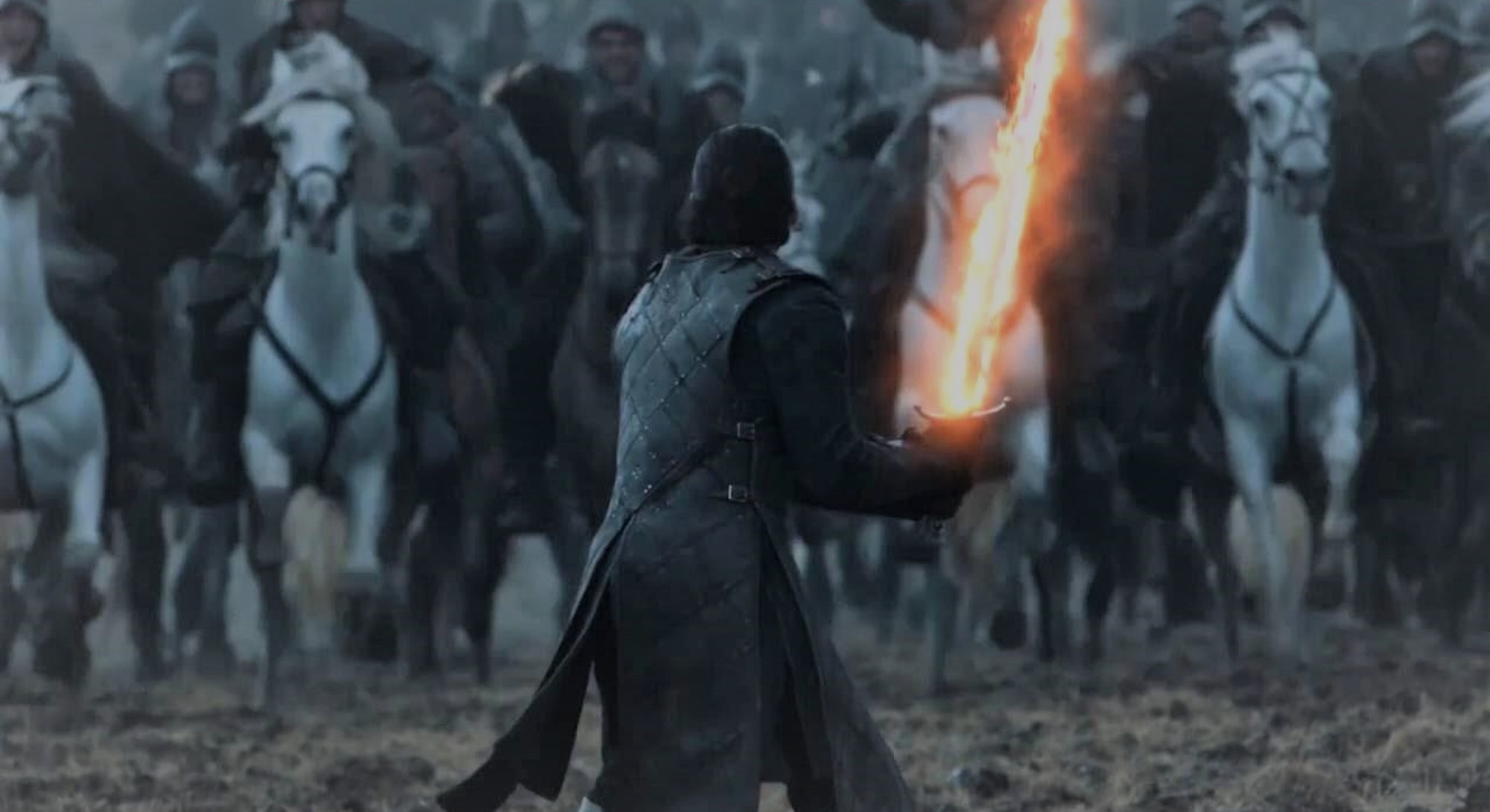 Game of Thrones teased the identity of the Prince That Was Promised, but The Winds of Winter may finally reveal the truth about Azor Ahai.

The HBO adaptation of George R.R. Martin's "A Song of Ice and Fire" series ended its eight-season run with many questions left unanswered. However, one of the biggest was the identity of Azor Ahai, a legendary hero prophesied to be reborn as the champion of Westeros. The prophecy of this foretold warrior wasn’t discarded on Game of Thrones so much as it was effectively replaced by a similar prophecy about a Prince That Was Promised.

Many fans speculated that Azor Ahai and the Prince That Was Promised were one and the same. Contrary to popular belief, however, the legendary figures have marked differences. Game of Thrones even included a brief Easter egg that teased Azor Ahai in an old text, but The Winds of Winter — George R.R. Martin’s upcoming sixth entry in the A Song of Ice and Fire book series — may finally reveal the identity of Azor Ahai once and for all.

The untold origins of Azor Ahai

As the story goes, the tale of Azor Ahai begins in darkness. Five thousand years prior to the events of Game of Thrones, the ancient books from Asshai, a shadowy port city in the region of Essos, foretold a chosen hero who would forge a blazing and powerful sword. This weapon — aptly called Lightbringer — would help Azor Ahai defeat the darkness cloaking the world.

Azor Ahai worked for a month to forge Lightbringer. His first two attempts ended in failure, with the steel sword shattering to pieces after once dipping it in water and later stabbing a lion’s heart. At this point, the warrior realized he had to kill his beloved wife, Nissa Nissa, for the sword to truly become all-powerful.

And so, he thrust Lightbringer into her heart, merging her dying soul with the steel of the blade to create the mightiest of swords, which was also referred to as the Red Sword of Heroes. Essentially, it was believed in Westeros that the story would repeat itself. Azor Ahai would be reborn as the savior when the darkness returned. It’s also assumed the darkness alluded to in the prophecy is the Long Night and the White Walkers.

“There will come a day after a long summer when the stars bleed and the cold breath of darkness falls heavy on the world. In this dread hour a warrior shall draw from the fire a burning sword. And that sword shall be Lightbringer, the Red Sword of Heroes, and he who clasps it shall be Azor Ahai come again, and the darkness shall flee before him.” — A Clash of Kings, George R.R. Martin

Samwell Tarly and Gilly spend a lot of Game of Thrones Season 7 doing research in the Citadel’s library, and one screenshot, in particular, reveals that Gilly read a passage on the Azor Ahai prophecy. However, this Easter egg was the only time Azor Ahai is ever referenced on Game of Thrones.

Instead, the series approached the concept of a Westerosi savior by introducing viewers to the Prince That Was Promised prophecy.

Azor Ahai vs. the Prince That Was Promised

Melisandre, a Red Priestess serving the Lord of Light, predicted that King Robert’s brother Stannis Baratheon was the Prince That Was Promised. It’s why she remained by his side and worked so hard to convince him that the path toward the Iron Throne and usurping Joffrey as king was the right call.

In the books, Melisandre used the terms Azor Ahai and the Prince That Was Promised to describe the same prophecy, though she seems to prefer the former. That said, while the argument carries on regarding whether or not the two prophecies are one and the same, there are a few notable differences between them.

For one thing, they come from different religions. Azor Ahai stems from the R'hllor religion, while the Prince That Was Promised is a Valyrian prophecy. It's unclear which version came first in George R.R. Martin's invented history, or whether they were both inspired by the same story.

The prophecy of Azor Ahai also clearly alludes to resurrection and makes it clear this legendary figure is male. On the other hand, because the Prince That Was Promised was written in High Valyrian, the “prince” in the prophecy is gender-neutral, meaning it could be a man or woman. Of course, it can’t be ignored that the two prophecies overlap, but the story of Azor Ahai is primarily one of sacrifice and tragedy while the other is not.

Who is Azor Ahai?

Game of Thrones never revealed the identity of the mysterious Azor Ahai (or the Prince That Was Promised) and the books haven't either — at least not yet. Still, there has been plenty of debate as to who the Westerosi savior could ultimately be.

Following Stannis’ death, Melisandre is asked to resurrect Jon Snow. She doubts she can do it, but ultimately appeals to the Lord of Light. Miraculously, Jon is resurrected and then caps off his storyline in Season 8 by killing Daenerys. In hindsight, Jon seems to fit the bill of Azor Ahai, having been reborn only to then kill his lover with his sword.

Melisandre heavily implies that Jon is the chosen one after all. However, Jon’s still very much dead in the books and there’s no confirmation as to whether he will be reborn by the end of The Winds of Winter or whether Melisandre will handle his resurrection like she did on the show. Honestly, his being Azor Ahai might be too obvious a choice.

Then there's Daenerys, who wasn't resurrected in the traditional sense but did survive a fire, being reborn from the flames as the Mother of Dragons. Daenerys didn't kill her beloved Khal Drogo either, but she was indirectly involved in his untimely demise.

Dany being the Lightbringer might be a nod to the fact that she has the last living dragons, who just so happen to breathe fire, lighting the darkest of nights. All that said, both the books and the show have alluded to either Daenerys or Jon being Azor Ahai and it would befit the series’ title of A Song of Ice and Fire for them to tide over the darkness together.

Finally, there’s Arya Stark, who became a contender for the title of Azor Ahai more prominently in Season 8. In hindsight, however, her journey has been one of rebirth. She began Game of Thrones as Arya, daughter of Catelyn and Ned Stark, but her training with the Faceless Men quite literally taught her how to become someone else. Winds of Winter could wrap up that training and make her path towards becoming a messianic figure much more clear.

Plus, Arya killed the Night King, which kind of makes her Azor Ahai by default, and it's possible The Winds of Winter will build to that same finale.

With all of that in mind, there’s no telling what will happen, who Azor Ahai could be, or even if the prophecy matters.

It’s possible The Winds of Winter will offer a major clue as to the identity of Azor Ahai or, at the very least, the book will reveal whether the prophecy will ever come to pass. After all, it may simply be a story meant to keep hope alive amidst the threat of the Others. Whatever the case, The Winds of Winter could (and should) provide some long-awaited answers to the mystery, regardless of whether it directly reveals the legendary figure's identity or not.

After all, there's still one more book to go after that, and Martin will need to save something for A Dream of Spring.

The Winds of Winter doesn't yet have a scheduled release date.