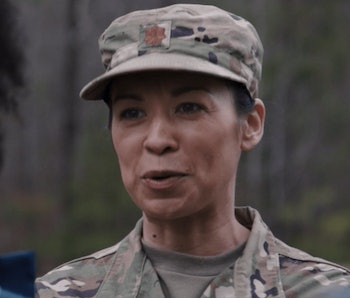 WandaVision fans were very excited to meet Monica’s contacts in the Disney+ show’s most recent episode. Many were convinced the “Aerospace Engineer” Monica referenced in WandaVision’s fifth episode would end up being a major Marvel character, like Reed Richards or Blue Marvel.

Instead, Monica’s contact turned out to be a new Marvel Cinematic Universe character named Major Goodner, much to the disappointment of comic book obsessives everywhere. But there may be more to Major Goodner — and her whole team — than meets the eye.

The Theory — A new WandaVision fan theory suggests that Major Goodner and her fellow soldiers may actually be Skrulls in disguise. The theory comes from TikTok user Jen Markham, who suggests Goodner’s line about Monica’s mother not being the only person her team is loyal to could be a reference to both Monica and Nick Fury — two characters who have a positive history with the Skrulls.

Check out the full theory below:

Skrulls in the MCU

The Skrulls made their debut in the MCU in 2019’s Captain Marvel. Led by Ben Mendelsohn’s Talos, the Skrulls were introduced as villains in the film before becoming allies with Brie Larson’s Carol Danvers and Samuel L. Jackson’s Nick Fury.

The Skrulls then reappeared in the Spider-Man: Far From Home post-credits scene, where they were revealed to be masquerading as Nick Fury and Maria Hill on Earth as a favor to the former S.H.I.E.L.D. director, who was enjoying a post-Endgame vacation in space.

Moving forward, we know that one of the Disney+ shows Marvel has in development right now is Secret Invasion — based on the comic book event about a group of Skrulls infiltrating Earth with plans of taking the planet over. Samuel L. Jackson and Ben Mendelsohn are the confirmed leads of that series, and rumors speculate that other MCU fan-favorites may be returning for the show as well. So it’d make sense for Marvel’s other Disney+ shows to start setting up Secret Invasion by further establishing the Skrulls’ presence on Earth.

The Inverse Analysis — Spider-Man: Far From Home proved Marvel was willing to use the Skrulls in fun, playful ways even after the events of Captain Marvel. Knowing that Secret Invasion is in the works also adds to the possibility that some of the characters we’re seeing again or meeting for the first time in Phase 4 may actually be Skrulls in disguise.

Combine those two facts with Monica’s established history with the Skrulls, and it suddenly seems possible that Major Goodner and co. are secretly new (or familiar) Skrulls. If that's the case, then it would certainly work as both a twist that fans didn’t see coming and as a fun alternative to the more obvious theories that were circulating online prior to WandaVision Episode 7’s premiere.

More like this
Culture
Sep. 24, 2022
She-Hulk shows how Marvel can fix its biggest tone problem
By Eric Francisco
Entertainment
Oct. 1, 2022
Will Agatha: Coven of Chaos feature one of Marvel’s oldest (and scariest) villains?
By Richard Newby
Entertainment
Oct. 1, 2022
Who is Hulk King? She-Hulk could be setting up a Secret Invasion villain
By Dais Johnston
Related Tags
Share: