'WandaVision' aerospace engineer: Is Reed Richards already in the MCU?

“I know an aerospace engineer.” 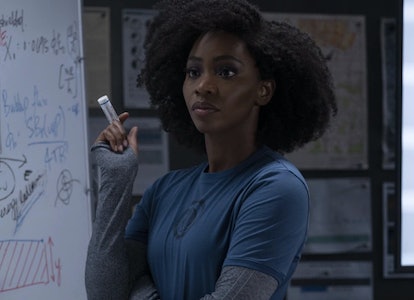 WandaVision is doing big things for the Marvel Cinematic Universe. The Disney+ series is telling a story unlike any previously seen in the MCU — one in which a powerful Avenger may be turning bad, dangerous new villains lurk in the shadows, and the literal multiverse is being split open.

But WandaVision may not just be setting up the stories of Captain Marvel 2, Spider-Man 3, and Doctor Strange in the Multiverse of Madness (as if that wasn't enough). It could also be the Phase Four title that finally brings Marvel’s First Family into the MCU.

“I know an aerospace engineer”

A little less than halfway into WandaVision’s fifth episode, when Darcy, Jimmy, and Monica are brainstorming how they could get back into Westview without having their minds wiped, Monica makes a comment that she knows an Aerospace Engineer who would be “up for this challenge.” The episode itself doesn’t specify who the Aerospace Engineer is, but Marvel fans have already begun theorizing about who Monica could be referencing.

And who’s the current favorite suspect? None other than Reed Richards of the Fantastic Four.

In the Marvel comics, Reed Richards is a scientist and inventor who is an expert in multiple fields — including aerospace engineering. So Richards is one of the few major comic book characters who Teyonah Parris’ Monica could be referring to in the scene without the MCU having to rework his character at all from the comics. This also isn’t the first time that WandaVision has seemingly referenced the Fantastic Four.

The WandaVision premiere ended with an odd Easter egg that, after doing some online investigative work, connected back to Ben Grimm of the Fantastic Four. Kathryn Hahn’s nosy neighbor Agnes is also rumored to secretly be Agatha Harkness, a character from the Marvel comics with close ties to the Fantastic Four.

Meanwhile, some fans have even been speculating that WandaVision Episode 4 may have discreetly set up the Fantastic Four’s origin story. And just to add to the growing pile of possible Fantastic Four connections — it’s also worth noting that, in the comics, Reed, Ben, Sue Storm, and Johnny Storm all get their powers after being exposed to cosmic radiation — the same type of energy that Wanda’s Westview dome is giving off.

The Inverse Analysis — Given how the line about the Aerospace Engineer is delivered in WandaVision Episode 5 — the scene literally cuts closer to Monica just for that line — it’s clear that it’s not just a throwaway moment. The line was intentionally put there for a reason, but whether or not it really is part of Marvel’s plan to set up the Fantastic Four in the MCU remains a mystery for the time being. There’s no telling if the characters themselves will directly factor into WandaVision’s story either.

With that being said, it seems highly likely that Monica is, at the very least, referring to Reed Richards. Few characters fit the profile of an Aerospace Engineer capable of taking on the “Maximoff Anomaly” quite like he does. It’s entirely possible that this could be Marvel Studios’ first signal that the character does currently exist within the MCU. After all, the studio is developing a Fantastic Four movie right now.