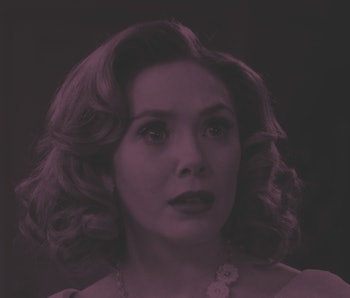 There is a lot going on in WandaVision. The Marvel Disney+ series doesn’t hold back in its first two episodes, both of which premiered on the streaming service on January 15. From the show’s seemingly endless amount of references to old TV sitcoms of the '50s and '60s to the clues already being laid about the show’s central mystery — WandaVision is a bit of an overwhelming experience.

But of the many strange details littered throughout these first two WandaVision episodes, one, in particular, seems to be worth some extra attention. We are, of course, talking about “Babs Digby.”

Who is Babs Digby?

Babs Digby is the first name to appear over Wanda and Vision’s smiling black and white faces at the end of the WandaVision premiere. Listed as a producer on the series, Babs is one of a few names that are included in this fake list of credits (the real WandaVision credits commence a few seconds later — starting with director Matt Shakman). However, none of the other names are quite as strange and eye-catching as Babs. It’s a curious name and one that immediately feels like a reference to, well, something.

Fortunately, a little bit of Googling reveals the answer. Prepare yourselves — this is about to get weird.

Typing Babs Digby itself into Google will give you a few different results. The one that caught our eyes though, was the Wikipedia page for the 1940s radio program and TV series, The Life of Riley, which featured one character named Babs and another character named — you guessed it — Digby.

On the surface, this may seem like WandaVision just throwing in yet another reference to an iconic '40s and '50s program. A closer look, however, reveals an obscure connection between The Life of Riley and the Marvel comics.

It turns out The Life of Riley was responsible for popularizing the catchphrase, “What a revoltin' development this is!” which its titular character would often exclaim during moments of indignation. But that catchphrase may also be familiar to Marvel comics fans. For good reason too, since it was often reused by none other than Ben Grimm of the Fantastic Four.

Is WandaVision setting up Fantastic Four?

As is the case with most of WandaVision, it’s hard to know what to make of this Easter egg. Is it possible that the Fantastic Four, or at least Ben Grimm, are somehow connected to what’s actually going on in WandaVision? Or is this just a fun nod by the Marvel Studios team towards another time when their iconic characters were influenced by old sitcoms?

Right now, we’re leaning towards the latter case. It is entirely possible that the Fantastic Four do play some kind of role in WandaVision’s overarching mystery — especially after Kevin Feige announced a Jon Watts-directed Fantastic Four movie being in development last month. But given the general conversations and theories currently surrounding WandaVision, it seems more likely that Feige and co. have a different plan in mind for introducing Marvel’s First Family into the MCU.

Either way, "Babs Digby" is just yet another fun, deep cut Marvel reference included in WandaVision — a show that’s already brimming with them.

WandaVision is available to stream now on Disney+.