"My wife and her flying saucers." 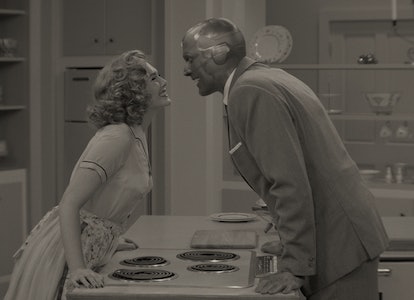 How do you describe a Marvel movie? It's got action, superheroes, maybe a handful of jokes, and a whole lot of heart. Add that all together and you have a genre onto itself: Marvel.

The Marvel genre is broad enough to encompass other movie genres. Captain America: Winter Soldier is a spy thriller, Spider-Man: Homecoming is a teen adventure, and Avengers: Endgame has major heist movie vibes. But they were all first and foremost Marvel movies telling superhero stories.

WandaVision's first two episodes weren't the "Marvel genre" of every other property in the franchise. Yes, these characters come from the great Avengers universe and yes, they have superpowers, but these superpowers aren't the main focus of the story. Instead of using the tools of a specific genre to tell a Marvel story, WandaVision uses Marvel tools to faithfully recreate another genre: the sitcom.

While Vision and Wanda both use their powers throughout these two episodes, these powers aren't being used to fight some sort of evil. Instead, they're being used to impress Vision's boss and win over the queen bee of their neighborhood. While there is an underlying eerieness surrounding Wanda's very existence, it's not the main concern. WandaVision isn't any more of a Marvel story than I Dream of Jeannie or Bewitched — the magic is just a means to an end of greater comedic conflicts.

WandaVision's pilot serves as a loving homage to The Dick Van Dyke Show, complete with an ottoman gag in the intro. The Dick Van Dyke Show may have never featured any superpowers, but it had awkward dinner parties aplenty. Behind the floating recipe cards and magicked-on cocktail dresses, WandaVision Episode 1 is the story of a couple improvising a dinner party. The plot would be basically the same without the powers, just a lot more complex.

Episode 2 takes its cues (and its animated title sequence) from Bewitched, a show that is about as close to WandaVision as it gets. Paul Bettany serves up a near pitch-perfect Dick York, known by any self-respecting Bewitched fan as the superior of the two actors who played husband Darrin Stephens.

Here's the plot of a standard episode of Bewitched: witch housewife Samantha uses powers, they have an unintended effect, and hijinks ensue as she sought to rectify the situation and hide her powers. There's even an episode where Samantha is on the planning meeting of a fundraiser and has to "assist" the stage magician with her powers. However, she was making lame magic look real, not the other way around.

Aside from this one tweak, Marvel is essentially using his tremendous success and influence to recreate specific episodes of beloved 1960s sitcoms. We never would have predicted it, but it's incredible to see WandaVision bend to the genre it's emulating, and not the other way around.

While it's looking like not every episode of WandaVision will be using this formula (the series is expected to shift dramatically in its later episodes), it's surprising to see Marvel let its own trademark brand take a back seat for once so that Elizabeth Olsen and Paul Bettany can cosplay as Samantha and Darrin Stephens.

Hopefully, this isn't just a rare abnormality but a reliable new option for Marvel Studios moving forward. In the future, Marvel movies might not feel like "Marvel movies." They might just be movies set in the Marvel universe.