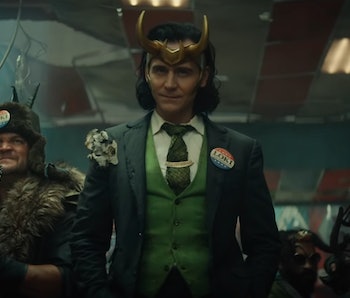 The Marvel Cinematic Universe is expanding on Disney+. At Disney Investor Day 2020, Marvel Studios busted out the big guns with new trailers for shows like WandaVision, The Falcon and the Winter Soldier, and details about new movies like Doctor Strange in the Multiverse of Madness.

It is important to note that no Marvel movie was announced for "Premier Access," meaning the theatrical releases are still opening theaters and not Disney+ (until after their theatrical run). While plans can change based on how much the ongoing Covid-19 pandemic is handled in 2021, as of now, Disney and Marvel are operating as if theaters will be back in full force by next year.

Here's everything about the Marvel Cinematic Universe, unveiled at the 2020 Disney Investor Day webcast.

The Marvel presentation opened with a new trailer for WandaVision, which showed off more superhero action than previous trailers for WandaVision revealed. The show is set for a Disney+ streaming premiere on January 15, 2021.

Marvel's Kevin Feige confirmed that Doctor Strange in the Multiverse of Madness is in production with Sam Raimi as director. In addition to the cast already announced, the studio revealed Xochitl Gomez (The Baby-Sitters Club) as the cosmic superhero America Chavez.

And while details were scarce, Feige also confirmed that Doctor Strange in the Multiverse of Madness will have direct ties to the third Spider-Man movie, which will open in theaters in December 2021.

New trailer for The Falcon and the Winter Soldier (Disney+)

A first real trailer for The Falcon and the Winter Soldier screened during the webcast, which showed among other things Sam and Bucky's banter as co-leads of an international action thriller. A release date window of March 2021 was also confirmed.

Nothing new about the delayed Black Widow was announced except that the movie will still open in theaters on May 7, 2021. Kevin Feige thanked fans for their patience while they wait for the movie.

Confirmed for a May 2021 premiere on Disney+. A full-length trailer was released for the series, which reveals that the show indeed picks up after Avengers: Endgame and will have Loki make a mess throughout time and space. A closing shot confirmed an adaptation of the 2016 mini-series Vote Loki by Christopher Hastings. The show was described as a science-fiction "crime thriller."

A new trailer for What If...? showed alternate instances like Black Panther as Star-Lord, Peggy Carter as Captain America, and Doctor Strange fighting an evil double of himself.

Shang-Chi and the Legend of the Ten Rings

Little was revealed about Shang-Chi. Feige simply confirmed that the movie wrapped production in Australia.

The first look at Ms. Marvel revealed Iman Vellani was New Jersey teenager Kamala Khan and her own universe of characters. While not really a trailer, Disney did show off some isolated footage in a montage with voice-over about Kamala Khan's significance for 21st century comic book fans.

Kevin Feige confirmed Captain Marvel 2 is in the early stages of pre-production, with director Nia DaCosta helming the project. The movie will star Brie Larson return to her role, along with Teyonah Parris playing Monica Rambeau (a role she will also play in WandaVision) and Iman Vellani as Ms. Marvel. Yes, we're getting a whole team-up of Marvels on the big screen!

Another Marvel movie that would have opened in 2020, Kevin Feige confirmed that Eternals is finished and on the way. The movie will open in theaters on November 5, 2021.

While the leaks are unavoidable, Marvel finally announced that Hailee Steinfeld will join Jeremy Renner in the new Disney+ series Hawkeye, an adaptation of the acclaimed Hawkeye comic books by Matt Fraction and David Aja.

Feige finally put rumors to rest by confirming Tatiana Maslany (Orphan Black) as the star of She-Hulk. The series follows attorney Jessica Walters who gains some of the Hulk powers from her cousin, Bruce Banner. Actors Mark Ruffalo and Tim Roth are confirmed to reprise their roles as Hulk and Abomination (from 2008's The Incredible Hulk) respectively.

Another Disney+ series, Marvel did not announce an actor for the role of the dark superhero vigilante from Marvel's comics. But Feige did confirm that the show will dive into Egyptian mythology (as the source of Moon Knight's powers) and also Moon Knight's mental illness, as the character suffers from dissociative identity disorder (DID), also known as multiple personality disorder.

Announced at Investor Day. Finally, after months of speculation, a Secret Invasion series will arrive on Disney+. Based on a 2008 comic book crossover, the series will involve the Skrulls (introduced in Captain Marvel) and pick up from the post-credits scene of Spider-Man: Far From Home. Samuel L. Jackson and Ben Mendelsohn will return in their roles of Nick Fury and Talos.

after speculation...will tie to feature films

Announced at Investor Day, the new Disney+ series Ironheart is based on the comics by Brian Michael Bendis and Mike Deodato. The series is about teenage genius Riri Williams, who builds her own "Iron Man" suit with an artificial intelligence modeled after Tony Stark. (It is unknown if Robert Downey Jr. will return for Ironheart.)

In addition to the show's announcement, Kevin Feige also confirmed that actress Dominique Thorne (If Beale Street Could Talk) will star in the series as Riri Williams.

Announced at Investor Day, the new Disney+ series is based on the 1987 story line in Bob Layton and David Micheline's Iron Man. Don Cheadle is set to return as Rhodey/War Machine.

The Guardians of the Galaxy Holiday Special (Disney+)

I Am Groot show revealed (Disney+)

Announced at Investor Day, I Am Groot will be a Disney+ exclusive animated series of shorts following Groot in his own adventures across the galaxy.

Kevin Feige confirmed that production on Thor: Love and Thunder will begin in January, and that actor Christian Bale (The Dark Knight) will play Gorr the God Butcher.

Nothing new about Blade was confirmed at Investor Day. Kevin Feige simply brought it up to remind fans that yes, Blade is still in the works, and with Mahershala Ali still in the title role.

Ant-Man and the Wasp: Quantumania title and cast

Announced at Investor Day, Ant-Man and the Wasp: Quantumania will be the third in the Ant-Man film series. The movie will again star Paul Rudd and Evangeline Lily, with Jonathan Majors (Lovecraft Country) as Kang the Conquerer.

The role of Cassie Lang, the daughter of Paul Rudd's Scott Lang, has been recast with Kathryn Newton (Detective Pikachu). In Avengers: Endgame, the role was played by Emma Fuhrmann.

Announced (more formally) at Investor Day, Black Panther II was confirmed by Feige to be in the works with Ryan Coogler on board to return as writer and director. The announcement came on a somber tone, as Feige acknowledged the death of actor Chadwick Boseman earlier this summer.

Feige confirmed that the role of T'Challa will not be recast with a new actor. Feige also didn't reveal how the franchise will proceed without Boseman, which leaves room for speculation. Based on Feige's phrasing of carrying on the mantle, it is possible that Shuri (Letita Wright) will take on the mantle of Black Panther.

Announced at Investor Day is a feature film adaptation (and, well, reboot) of Marvel's First Family, the Fantastic Four. No actors were announced in the roles of Reed Richards, Sue Storm, Johnny Storm, and Ben Grimm, but the movie will be helmed by Spider-Man director Jon Watts.