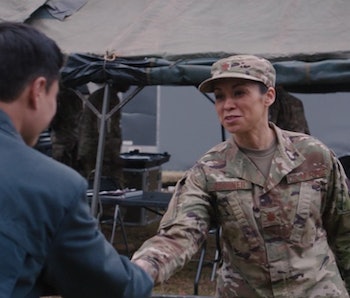 After weeks of hype and speculation, WandaVision finally revealed Monica Rambeau's mysterious friend and it was... a military leader we've never heard of before? Instead of Reed Richards or even Blue Marvel, we got a new character named Major Goodner who seems to have very little importance to the broader Marvel universe.

But that doesn't mean Goodner is just a throwaway name. A bit of digging online suggests it might just be a subtle tribute to a little-known artist whose work bridged the gaps between comics and social justice.

A quick Google search for "Goodner Marvel" doesn't reveal much — like S.W.O.R.D. director Hayward, Goodner seems to be a new invention of WandaVision — but it did lead me to an article about Kevlen Goodner.

Goodner, who referred to himself as "The Illest-strator," lived in Louisville, KY. He died on March 27, 2019 at the age of 48 after suffering from a stroke. In obituaries, he was remembered as a father, a talented rapper in his youth, a local leader, and an artist. His illustrations mixed comic book and graphic noir style with political messages. He drew Colin Kaepernick punching a neo-Nazi and illustrated articles about police brutality. He was a Black man.

Kevlen's most reliable work, however, was drawing pictures of popular superheroes with the faces of fans. In a tribute written by Pulitzer Prize-winning journalist Phillip M. Bailey, local poet Hannah Drake reflected on his work and it's importance to the community:

The chances that WandaVision's Major Goodner is a direct reference to Kevlen "The Illest-strator" Goodner is slim at best. As far as I can tell, Goodner never worked with Marvel in any official capacity, though his Instagram is full of original illustrations of Marvel and DC's biggest characters. He even met Stan Lee.

Regardless of the intention, now is as good a time as any to remember Kevlen Goodner. A man who left an impact on many but whose death went unnoticed by most of the world. Whether or not WandaVision meant to send me to his Instagram page, I'm glad it did. I spent the morning scrolling through his work, and I recommend you do this same.