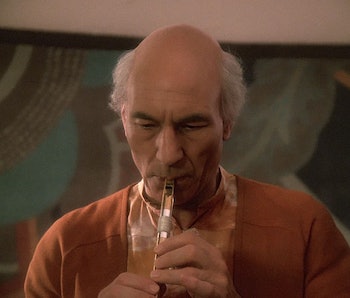 Giving daring sci-fi heroes normal families is always risky. WandaVision isn't just about Wanda's powers spinning out of control. The series also bets its entire premise on a massive life change for our two heroes. What happens when superheroes try to have a normal life? What happens when a science fiction person is dropped into a naturalistic setting with a tenuous grasp on reality?

In Episode 5 of WandaVision, Vision confronts Wanda with his spotty memory about his life before Westview. Though the details are different, Star Trek: The Next Generation explored a similar plotline in one of its best-loved episodes, a testament to just how far TV science fiction has come since the nineties — and how WandaVision ultimately has to end.

In the TNG episode "The Inner Light," Captain Picard (Patrick Stewart) is telepathically transported into an entirely different life. Instead of being the captain of a starship, he awakens to find himself an "iron weaver" named Kamin on a distant, and low-key planet called Kataan. Like Vision in WandaVision, Picard initially suspects his wife Eline (Margot Rose) is part of some conspiracy to keep him trapped in an outer space version of the suburbs. On some level, he's not wrong, because, by the end of the episode, we learn that Picard is living out an entire lifetime in the span of roughly 20 minutes. A mysterious probe has telepathically linked itself to Picard, which creates his simulated life.

Obviously, the sci-fi plot device is different than WandaVision, but the spiritual concept is the same: What happens when action heroes who live extraordinary lives are suddenly shunted into a more grounded lifestyle? Morgan Gendel — the writer of "The Inner Light" — was inspired by the George Harrison-penned Beatles song of the same name. The concept of both the song and the TNG episode was all about having a universe of life experiences, without actually going anywhere. At one point, Harrison sings: "Arrive without traveling."

Wanda's bubble universe in WandaVision echoes this concept, but the existence of the series also comments on the patience of TV audiences now relative to the 1990s. TNG's "The Inner Light" aired in 1992. But, it's not like the series could have gotten away with ten episodes of Picard living on Kataan, raising his children, learning how to play the flute.

Keep in mind, in the early '90s, the Star Trek franchise was the closest thing in pop culture to the Marvel Cinematic Universe. By 1996 there were two shows on the air, as well as several feature films, all with shared continuity and various character crossovers. (Picard, Worf, and Riker all appeared on Deep Space Nine, and events from the film First Contact impacted that series, as well as Voyager.) Obviously, the scale of Trek in the '90s is nowhere close to the MCU now, but relative to "geek" culture, the various Trek shows and films easily had the biggest output of content relative to anything else in related genres.

So, to scale, "The Inner Light" is exactly like WandaVision. It's an experimental premise, which garners some of its novelty from the fact the series is the opposite of the status quo of the rest of Marvel. Like "The Inner Light" being a one-off within Star Trek, we kind of know that the status quo of WandaVision is designed to be broken. But what makes that tension work is the idea that having a low-key suburban life is simultaneously appealing and a danger to the lifeblood of the given characters.

Picard's alter-ego Kamin literally has to grow-old and get near death for things to go back to "normal." And we can imagine a similar outcome for WandaVision. It's not like the ending of the series will posit a world in which Wanda and Vision stay in their cozy sitcom world. The whole point of moving them out of their familiar context is to, eventually, flip things around again.

The Next Generation could not have grounded Captain Picard for longer than one episode, otherwise, the series couldn't have continued to be "Star Trek." Similarly, WandaVision propels its narrative toward the idea that the world in which Wanda is raising her "family" can't continue to exist.

In both cases, one kind of life is weighed against another. The extremes are what makes the drama work, and just when the audience gets used to one kind of lifestyle for the characters, that gets flipped. It's a tricky sci-fi narrative feat, with few peers, save for perhaps, the middle act of 1980's Superman II when Supe (Christopher Reeve) decided to give up his powers for Lois Lane (Margot Kidder). But, like Picard going back to his life as the Enterprise captain, Superman has to give up his mortal life with Lois pretty quickly.

Most people's favorite classic Superman movie is Superman II. Similarly, "The Inner Light" is considered not just a good entry into the Trek canon, but often rated as the best episode of TNG. Michael Chabon, the showrunner of Picard Season 1 stated outright that "The Inner Light" is one of his favorite episodes of TV, "period."

The point is, we tend to like it when our fantastical heroes are brought back down to Earth, even if those installments don't represent what those characters are usually doing. The experiment of WandaVision is to see if an atypical superhero story can elevate the dramatic elements of Marvel's storytelling into a more naturalistic realm. If you take away Thanos and the punching, does Marvel still have a soul? And if it does, will WandaVision reveal its true inner light?