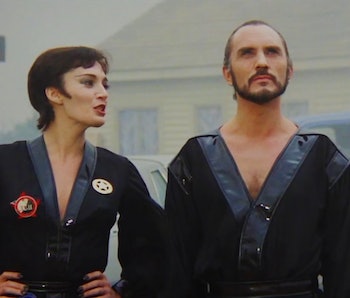 Everyone knows that Superman’s father — Jor-El — discovered “the Phantom Zone.” But what the SyFy series Krypton presupposes is, maybe he didn’t? In the latest episode, one big piece of Superman mythology gets a brand new origin, one that has implications of the General Zod variety.

Spoilers ahead for the second episode of Krypton , “House of El.”

In most every single iteration of Superman mythology, the space/time vortex known as “the Phantom Zone,” was discovered by Jor-El. The zone dates back to the Sixties “silver age” of DC comics but is probably most famous thanks to its appearance in the films Superman (1978) and Superman II(1980). In those movies, the wicked General Zod is imprisoned in the zone along with his Kryptonian cohorts, Ursa and Non. The representation of this imprisonment is memorable, too: all three criminals are trapped in a two-dimensional square that tumbles through space.

But now, in the timeline of the show Krypton, it’s not Superman’s father who discover’s the Phantom Zone, but instead, his great-great-grandfather; Val-El. In the new episode, Seg-El (that’s the future father of Jor-El) finds out his grandfather made an awesome living hologram himself, which essentially makes him immortal. Hardcore fans know that Jor-El does the same thing much later. In Man of Steel, Jor-El’s hologram is so crafty that it even can walk around and help Lois Lane out of a jam.

Val-El’s hologram is pretty much the same, and in this episode, he convinces Seg-El, that yes, traveling between worlds is pretty easy, if you know where the Phantom Zone is located. The episode also features Seg subtly making fun of the ostentatious naming of the zone. When Val tells him what he called it, this happens:

Val: “What, you have a better name?

And there you have it. The Phantom Zone was discovered and named way before Jor-El was even born. What this means for future episodes of Krypton is very interesting though. Val doesn’t really see the Phantom Zone as a space prison, the way its portrayed in the famous films. Instead, it sounds more like a way to travel through all of time and space. So, why, by the time of Jor-El is it only used to excommunicate people? And considering Seg’s secret girlfriend, Lyta, has the last name “Zod,” will she get mixed up with this Phantom Zone business, too? - Krypton airs on SyFy on Wednesdays at 10 pm eastern time, right after The Magicians.