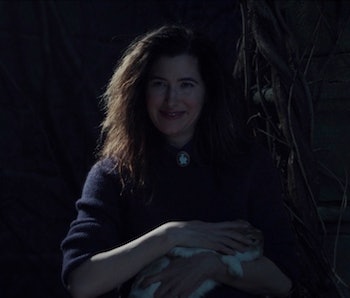 Señor Scratchy wasn’t a red herring after all. WandaVision viewers and Marvel fan theorists spent weeks speculating about Scratchy, Agatha Harkness' strange cicada-eating rabbit. The creature's name was a clear reference to two notable characters from the Marvel comics, and several moments in WandaVision’s first 8 episodes seemed to hint that there was more going on with the rabbit than meets the eye.

Last week’s WandaVision finale totally ignored Señor Scratchy though, leading many fans to assume that their theories about the rabbit were for naught. However, new comments from the WandaVision director prove that fans weren’t actually wrong to be suspicious after all.

The News — During a recent appearance on Kevin Smith and Marc Bernardin’s Fatman Beyond podcast, WandaVision director Matt Shakman revealed that there was originally a scene in the WandaVision finale all about Señor Scratchy. According to Shakman, the scene in question featured Billy, Tommy, Monica, Darcy, and Ralph all sneaking into Agatha’s basement to steal the Darkhold.

The WandaVision director revealed that the scene itself was actually shot, but that its VFX were never finished because the WandaVision creative team decided to cut the scene for being too much of a “detour” away from the finale’s main storylines of Wanda vs. Agatha and Vision vs. White Vision.

A Witch’s Familiar — Prior to the WandaVision finale’s premiere last week, one of the many fan theories circulating online was that Señor Scratchy would be revealed as a major Marvel villain from the comics.

Some speculated that Señor Scratchy would turn out to be Mephisto, a Marvel comics villain that was heavily linked to the series. In the comics, Mephisto has gone by both “Nick Scratch” and “Jack Scratch” at different points. Meanwhile, some fans thought Señor Scratchy was actually Nicholas Scratch, a powerful sorcerer who also happened to be Agatha Harkness’ son in the comics.

Now, Shakman’s comments suggest the fan theories about Señor Scratchy were, at the very least, somewhat correct. While the character may not have secretly been Mephisto or Nicholas Scratch in disguise, he wasn’t just a rabbit either. Considering just how many WandaVision fan theories ended up being totally off the mark or just straight-up incorrect, the Scratchy reveal is something worth celebrating.

The Inverse Analysis — It’s unclear, as of now, if this Señor Scratchy reveal was the only scene from WandaVision that ended up on the cutting room floor. Given just how many WandaVision rumors and leaked reports were released online these past few months — most of which detailed scenes and twists that didn’t end up coming to pass in the series — it’s entirely possible there were some other moments that were ultimately cut for narrative or pacing reasons.

For now, though, WandaVision fans can at least rest easy knowing all their Señor Scratchy theories weren’t totally off base.